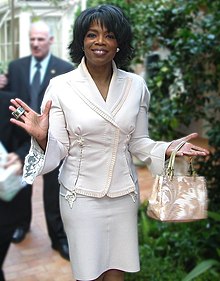 Oprah Gail Winfrey (* 29. January 1954 as Orpah Winfrey in Kosciusko , Mississippi , United States ) is an American talk show - presenter , actress and entrepreneur. She is best known for The Oprah Winfrey Show , which was later named after her. She had taken over their moderation in 1984 and it was by far the most successful talk show on US television until it was discontinued in 2011. In 2006 the weekly show had 21 million viewers in 105 countries.

Winfrey owns HARPO Productions , a production company that produces her and many other successful US TV formats. She is the first African American woman to become a billionaire. According to the US business magazine Forbes , she earned in the period from June 2009 to June 2010 approximately 315 million US dollars . Her net worth is estimated at $ 2.8 billion. Thanks to its powerful influence in the media and its large fan base, especially in the US, she won in 2010 in the list The World's Most Powerful People of the business magazine Forbes Place 64th

Studio of the Oprah Winfrey Show with company logo: "Harpo" - an ananym of the first name "Oprah"

Oprah Winfrey was born out of wedlock to minor parents. Your birth certificate gives the name Orpah , after the biblical Orpa . She herself stated that she was sexually abused at the age of nine. She became pregnant at the age of 14 and her child died shortly after birth. Winfrey has been in a relationship with entrepreneur Stedman Graham since 1986 .

Winfrey began her career as a news presenter in Baltimore , Maryland . In 1983 Winfrey moved to Chicago to host the morning talks show AM Chicago on WLS-TV . The first broadcast was on January 2, 1984.

The talk show was renamed The Oprah Winfrey Show due to its success , which ran on many syndicated television channels and ended up being just Oprah . This reflected on the traditional format of a talk show, the presenter invited people who suffered from poverty or were victims of unfortunate accidents. As a result, she soon began to work for charitable purposes. She tried to be open about various aspects of life, including topics such as childhood sexual abuse and adult substance abuse.

In the 1990s, she started her Oprah's Book Club on television. Many authors present their books at Winfrey, Bill Clinton was also a guest there on the occasion of the publication of his autobiography. The book club is important as an indicator for the US bestseller lists as well as a buy recommendation. As a result, Winfrey has a huge impact on the US media landscape. According to TV Guide magazine , her annual income in 2007 was around $ 260 million. In 2009, she earned around $ 315 million, according to Forbes Magazine, and was voted Most Influential Celebrity .

On November 20, 2009, Winfrey announced that she would end her talk show in 2011. The last broadcast was broadcast on May 25, 2011. In the same year Winfrey started her own pay TV channel OWN (Oprah Winfrey Network) . In terms of content, the station offers talk shows on topics such as health, psychology and money, as well as cooking programs and reality shows. The number of viewers is around 147,000. On January 1st 2012 there was also the start of her own new show Oprah's Next Chapter .

Winfrey was often the subject of criticism. She was accused of abusing her show's popularity and media power. The Washington Post accused her of treating her political guests too uncritically. A performance ban for Sarah Palin during the presidential elections was also criticized. In 2005, Winfrey came under fire for accusing the Paris branch employees of the Hermès fashion house of racism for not letting Winfrey into the branch 15 minutes after the store had closed. It was also criticized that she did not treat books that she presented in her book club programs and thus regularly became bestsellers (for example, the book presentation by the spiritual teacher Eckhart Tolle , A New Earth: Awakening to Your Life's Purpose ). . In 2009, Winfrey approved a presentation by Suzanne Somers , who uncritically and one-sidedly presented hormone products and cancer drugs that are rejected by medical professionals in front of an audience of millions. In fact, Oprah repeatedly offered a platform to controversial people without questioning, such as Rhonda Byrne , vaccination opponent Jenny McCarthy , Dr. Phil and Dr. Oz and Suzanne Somers.

Winfrey mentioned another allegedly racially motivated treatment in July 2013 in Zurich ("Täschligate") when talking about her appearance in a film about a black butler and asked about her experiences of racism on Larry King's talk show . Winfrey was interested in a 35,000-franc handbag exhibited behind glass. However, the saleswoman advised her not to buy the handbag as it would be "too expensive for her". The boutique owner and the saleswoman later stated that the incident was a misunderstanding.