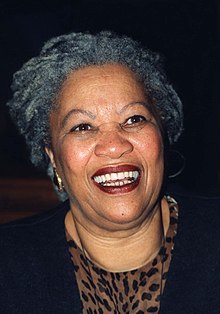 Toni Morrison (actually Chloe Ardelia Wofford ; born February 18, 1931 in Lorain , Ohio ; † August 5, 2019 in New York City ) was an American writer . She is one of the most important representatives of Afro-American literature and was the first African-American author to receive the Nobel Prize for Literature .

Toni Morrison was born in Lorain, Ohio ; the parents were Ramah (nee Willis) and George Wofford. She was the second of four children in an African American working class family. Her mother was born in Greenville, Alabama and moved north with her family as a child. Her father grew up in Cartersville , Georgia , and when he was about 15 years old, white people lyned two black businessmen who lived on his street. Toni Morrison said, “He never told us he saw bodies. But he had seen her. And that was too traumatic for him. ”Shortly after this incident, George Wofford moved to the racially integrated city of Lorain, Ohio, hoping to escape racism and secure a job in Ohio's burgeoning industrial economy. He worked independently and as a welder for US Steel . Ramah Wofford was a housewife and devout member of the African Methodist Episcopal Church .

When Morrison was around two years old, her family's landlord set fire to the house they lived in while they were at home because their parents could not pay the rent. Her family responded to this "bizarre form of evil" by laughing at the landlord instead of desperate. Morrison later said that her family's response showed how to maintain one's integrity and sustain one's life in the face of acts of such "monumental rawness".

Morrison's parents taught her a sense of heritage and language by telling traditional African American folk tales, ghost stories and singing songs. Morrison also read frequently as a child; her favorite authors were Jane Austen and Leo Tolstoy . At the age of 12 she became a Catholic and took the baptismal name Anthony (after Anthony of Padua ), which led to her nickname Toni. At Lorain High School , she was on the debating team, yearbook staff, and theater club.

In 1949 she began to study English at Howard University in Washington, DC , a "black university" . During this time she changed her nickname from Chloe to Toni (after her middle name Anthony , which she had adopted when she was twelve in the course of her conversion to Catholicism .)

1953 she received the Bachelor of Arts in English and in 1955 at the Cornell University the Master of Arts . From 1955 to 1957 she taught English literature at Texas Southern University in Houston . In 1957 she returned to Howard University as a lecturer. In 1958 she married the Jamaican architect Howard Morrison, with whom she had two sons. After her divorce in 1964, she started working as a publishing editor . During her sixteen years at Random House (1967 to 1983) she played an important role in establishing Afro-American literature and published books by Toni Cade Bambara and Gail Jones , among others .

1970 seemed to her a few years earlier incurred first novel The Bluest Eye ( The Bluest Eye ) . Both this work and Sula (1974) were well received by the critics, but the success with the audience was not achieved until the Song of Solomon (Solomon's song) in 1977. Her books have been translated into several languages ​​and are mostly about the world of black women.

In addition to the Nobel Prize for Literature, she was also awarded the Pulitzer Prize (1988) and the Premio Grinzane Cavour Special Prize (2001), among others . In 2010, Morrison was accepted as a knight in the French Legion of Honor . In 2012 she received the Presidential Medal of Freedom and in 2016 the PEN / Saul Bellow Award for Achievement in American Fiction .