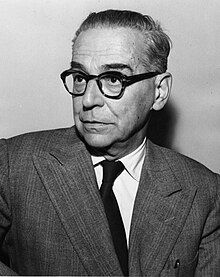 Andrić came from a Catholic family of craftsmen with father Antun and mother Katarina (nee Pejić), who lived in Sarajevo . He was born and baptized on the same day while his mother was visiting relatives in Dolac in Bosnia, which was then occupied by Austria-Hungary . Andrić was two years old when his father died of tuberculosis. His mother could not support him, so he grew up with his father's sister Ana and her husband Ivan Matkovščik in Višegrad .

After primary school (osnovna škola) in Višegrad , he graduated from high school (srednja škola) in Sarajevo . From 1912 he studied philosophy, Slavic studies and history in Zagreb , Vienna , Cracow and Graz , with interruptions caused by the First World War . For this he received a grant from the Croatian Society for Culture and Education called Napredak ( Progress), a society of Bosnian Croats . He continued his studies from 1913 to 1914 in Vienna and Krakow. On the death of the Croatian writer Antun Gustav Matoš , Ivo Andric gave a speech in the Vienna Club of Croatian Students. At the beginning of the First World War, as a member of the revolutionary organization Mlada Bosna and because he had given shelter to someone involved in the assassination attempt in Sarajevo , he was sought by the Austro-Hungarian authorities and arrested in Split . There he spent a year in prison. Andrić was then exiled to Ovčarevo (near Travnik) and Zenica until he was given amnesty in 1917. He went to Zagreb for medical treatment and founded the literary magazine Književni jug ("Literary South") (1918).

After the First World War he worked in the Zagreb National Council , whose declaration of the Union of Serbia, Croatia and Slovenia led to the Kingdom of Serbs, Croats and Slovenes and in 1929 to the Kingdom of Yugoslavia . In 1919 he went to Belgrade and in February 1920 joined the Foreign Ministry there. Between 1920 and 1923 he worked in the consulates in the Vatican , Bucharest , Trieste and Graz . In 1924 he was at the Karl-Franzens University in Graz with a thesis on "The development of spiritual life in Bosnia under the influence of Turkish rule" doctorate . Until 1941 he continued to serve in the diplomatic service in Paris , Madrid , Brussels , Geneva and Berlin . In 1939 Andrić became a member of the Serbian Royal Academy and in the same year the extraordinary envoy of the Kingdom of Yugoslavia in the German Empire . Under his direction, the newly built building of the Yugoslav legation in Berlin was moved into in 1940 . During this time he went in and out of Carl Schmitt's . In 1941 he asked for his dismissal as ambassador of Yugoslavia in the German Reich, but still had to attend the three-power agreement of March 25 in Vienna as the official representative of Yugoslavia. After the bombing of Belgrade on April 7th, the German government offered him to leave for Switzerland. After the internment of the staff of the Yugoslav embassy and consulates on Lake Constance from April 7 to May 31, 1941, he preferred to return to Belgrade. There he resigned from the diplomatic service and worked securely on his great novels.

After the Second World War, Andrić became chairman of the Yugoslav writers' association, member of the Yugoslav parliament and later film censor. In 1954 he became a member of the Union of Communists of Yugoslavia and was the first to sign the Novi Sad Agreement on the Serbo-Croatian language . In 1958 he married his longtime partner Milica Babić , with whom he lived until her death in 1968. After he had often been traded as a favorite before, initially together with Miroslav Krleža , Andrić finally received the Nobel Prize for Literature in 1961 "for the epic force with which he shapes motifs and fates from the history of his country". 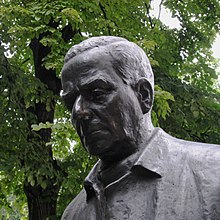 Monument to Ivo Andrić in Belgrade 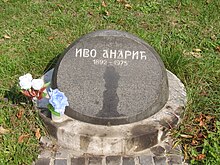 His grave in Belgrade

After his first poems and stories, he became world famous through the novels of the "Bosnian Trilogy" published in 1945 ( Na Drini ćuprija , Gospođica and Travnička hronika ). The novel, which appeared under the German title Die Brücke über die Drina , contributed to this. In his novels and stories he deals primarily with Bosnian life and history, as well as with the coexistence of Orient and Occident . His political stance is expressed in his works, he was a supporter of the Yugoslav multiethnic state idea, but on the other hand presented precisely the problem of the coexistence of different cultures. Even after the Second World War, he served the - now socialist - Yugoslav state.

He worked on the most important Zagreb magazines of a literary nature such as B. Savremenik ( contemporary) and Hrvatska njiva (Croatian field). Andrić wrote for newspapers and translated. His first books were also published in Zagreb: 1918 Ex Ponto; 1920 Nemiri (riots).

Apart from the Nobel Prize in 1961, Andrić received numerous honors from the Yugoslav state. He is the world's best known and most translated author of South Slavic literatures (translations in 40 languages). Today Andrić is honored by Serbia as well as Bosnia-Herzegovina and Croatia, although his political work is also controversial. In addition to street names, monuments, stamp issues and other honors, a museum in Belgrade is dedicated to him. It is run by the Ivo Andrić Foundation, which has been awarding the Andrić Prize to contemporary Serbian-speaking authors every year since the year the author died .

A stamp issued by the postal service of the Republika Srpska in December 2011 on the 50th anniversary of the Nobel Prize ceremony with the portrait of Andrics caused a scandal because the name of the entire state of Bosnia-Herzegovina was withheld on it. After the UN administration banned the brand, its price multiplied.

In Višegrad, on the initiative of the film director Emir Kusturica, the idealized replica of a medieval Serbian town was created under the name Andrićgrad . A monument to Ivo Andrić was inaugurated in its center on June 28, 2012, the Vidovdan . The project is particularly criticized by the Bosniak ethnic group in Bosnia and Herzegovina, as it manifests a one-sided Serbian history.