Sigrid Undset (born May 20, 1882 in Kalundborg , Denmark , † June 10, 1949 in Lillehammer , Norway ) was a Norwegian novelist , novelist, lay Dominican and essayist. Her works deal with the conflict between Norwegian tradition, the European crisis of her time, Roman Catholicism and the female emancipation movement. "Primarily for her powerful portrayals of Nordic life in the Middle Ages" , so the reasoning of the Nobel Prize Committee, she received the Nobel Prize for Literature in 1928 .

Sigrid Undset as a young girl

Sigrid Undset was the oldest of three daughters of Ingvald Undset and his wife Charlotte Gyth. Ingvald Undset was an internationally recognized Norwegian archaeologist , while Charlotte Gyth, three years his junior, came from a respected Danish family of lawyers. Sigrid Undset spent the first two years of her life in her grandparents' house in Denmark. Only after the birth of her sister Ragnhild, two years after Sigrid Undset's birth, did she and the family move to a country house on the outskirts of Oslo , which at that time was still called Kristiania . The family was very distant from the Norwegian Evangelical Church.

Her parents aroused Sigrid Undset's interest in Norwegian and European history and culture at a very early age and thus laid the foundation for her future novels. Charlotte Gyth was a watercolor painter . Encouraged by her mother to paint at an early age, Sigrid Undset wanted to be a painter as a child, but she began to add poetry to her drawings at an early age. She learned the Norse language from her father very early on . She also accompanied him to the archaeological university institute in Oslo and visited old churches with him. Sigrid Undset's detailed knowledge of the medieval forms of life that characterize her historical novels Kristin Lavransdatter and Olav Audunsson can be traced back to this.

The parents also made sure that their eldest daughter attended a prestigious private school in Oslo, which was considered very progressive, was one of the first to introduce co-education and also employed teachers. Sigrid Undset didn't feel comfortable at this school. Sigrid Undset was preoccupied with religious topics very early on, and she was not interested in either the Protestant faith represented there or the school's belief in progress. 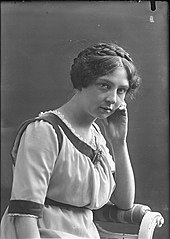 The death of the father

Sigrid Undset's father probably suffered from a late form of syphilis , which was no longer contagious, but at that time also incurable. As a result of the damage to the central nervous system, the disease increasingly restricted Ingvald Undset's ability to move from 1886 onwards. The family was forced to move further to downtown Oslo, near the university, several times. The apartments became increasingly dreary; from 1890 the family lived in a gray tenement in downtown Oslo. For Sigrid Undset, the moves meant the separation from a rural life, in which she felt "like a young snake on a sun-warmed hill".

When Sigrid was eleven years old, her father, to whom she was very close, died. The death of the father meant a massive economic decline for the family. Despite the waiver of the school fees, Sigrid Undset left the private school after the middle school examination. As the eldest she wanted to contribute to the livelihood of the family, she felt that the school fee waiver offered was too great an obligation. At the age of 17 she accepted a position as a secretary at the Norwegian branch of the German AEG in Oslo. She saw herself there as an "office slave" and lived a two-part life for the next 10 years. During the day she worked in the office; in the evenings she read and wrote late into the night. Her intensive preoccupation with Norwegian and European history and literature led to her later becoming one of Norway's leading intellectuals.

The careful observation of the lives of her colleagues shaped her first literary successes. Her first work, a novel that took place in the Middle Ages and which she completed at the age of 22, was rejected by the publishers on the grounds that she should write something more modern. “Crazy with anger” , as she wrote Andrea Hedberg, with whom she exchanged letters for forty years, she began to write to Ms. Marta Oulie . The eighty-page novel published in 1907 begins with the words: "I betrayed my husband" . A woman begins an extramarital love affair in order to escape the desolation of a joyless marriage and experiences how hopeless this path is. In her subsequent novellas, The Happy Age , Frau Hjelde and Hariet Waage , Sigrid Undset also contrasts the romantic ideas of her female characters with their lackluster reality.

With the tragic novel Jenny (1911) Sigrid Undset experienced her final breakthrough as an author. In the meantime she, who was always fascinated by an independent artistic life, had long since given up her profession and received a scholarship abroad, which led her to a longer stay in Rome . She let the strong impression of the journey and the "eternal city" flow into her work about the painter Jenny, who lets her say:

“That's the wonderful thing about going out into the world - any influence from people with whom you happen to have to live together at home ceases. You have to see with your own eyes and think for yourself. We learn to understand that it depends entirely on ourselves what this journey gives us - and what we see and are able to grasp, in which position we put ourselves and under whose influence we voluntarily go. You learn to understand that it depends on you how much life brings us. " 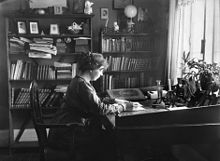 Sigrid Undset on her first day at Bjerkebæk. It was here that she finished the Kristin Lavransdatter trilogy in the years 1920 to 1922.

In Rome she also met the divorced Norwegian painter Anders Castus Svarstad , whom she married in 1912 and whom she then followed to London for half a year . She was also enthusiastic about this cosmopolitan city all her life. Between 1913 and 1919 Sigrid Undset gave birth to three children, two sons and a - mentally handicapped - daughter. At the beginning of the 1920s, their marriage failed; However, she gave her children a safe and loving home in Lillehammer , where she had the Bjerkebæk property built, which she later describes in Happy Times .

Success with novels from the past and present

During these years Sigrid Undset reached the climax of her literary achievements with two medieval novels: In 1928 she received the Nobel Prize for Literature for the three-volume novel Kristin Lavranst Daughter ; it is considered to be one of the main works of Norwegian fiction. The four-part novel Olav Audunssohn about rural medieval life and its religious way of life was also successful with critics and readers.

Undset in 1927
photography by Carl van Vechten , from the Van Vechten Collection of the Library of Congress

The descriptions of the life of Kristin Lavran's daughter and Olav Audunssohn in Norway in the 13th and 14th centuries, in addition to the impressive descriptions of nature and landscape, testify not only to their knowledge of the Middle Ages in its political, social and religious circumstances, but also to their ability to To put yourself in the thoughts and emotions of medieval people in different phases of life and life situations. The character of the landowner's daughter Kristin, who runs an estate as the wife of a knight and finally dies of the plague in a nunnery after marital crises and family tragedies, depicts Undset as a modern-looking, energetic and self-indulgent heroine.

The ability to describe people in their intellectual and spiritual development can also be found in Undset's contemporary and married novels. Already in Der Frühling (1914), Harriet Waage (1917) and Frau Hjelde (1917), then later in Ida Elisabeth (1932) and Das getreue Eheweib ( 1936), she deals very intensively with the often problematic coexistence of two different characters in “ modern “Norway apart - a conflicted topic with which she had gained experience herself. Her female characters in the foreground always appear as inwardly mature personalities who were emancipated for the time, but in the course of their plot the works always remain a plea for women to turn to family and children.

Turning to the Catholic Church

A significant event in Sigrid Undset's life was her conversion to the Catholic faith in 1924, which caused a scandal in the almost purely Protestant Norway. She processed this step in her books Gymnadenia (1929), The Burning Busch (1930), Katharina Benincasa and the essay volume Encounters and Separations (1931).

The German occupation of the country in 1940 ended Sigrid Undset's great creative period. She had to flee Norway because she had been involved in the resistance movement against Hitler and National Socialism in the early 1930s . She traveled with her youngest son Hans via Sweden , the Soviet Union and Japan to the USA , where she stayed until the end of the war. Her eldest son, Anders, had died in the war after she had recently lost her daughter. Nonetheless, she published the work Again in the Future, which still shows a positive attitude towards life . While there she accused National Socialist Germany as the enemy of her beloved homeland Norway, but looked to the future with courage and optimism without hatred and bitterness:

“The ideals of democracies have never been dreams, but goals. [...] We never want to imagine that any future wave could ever bring us to a goal. We can only find the way forward to our goals through our own efforts, through tireless, patient and courageous work. "

In 1943 she was elected as an honorary foreign member of the American Academy of Arts and Letters . In 1945 Sigrid Undset returned to Norway, where she died four years later. She was buried in Mesnali, a village 15 km east of Lillehammer, where her grave can still be visited today.

Undset's work is characterized by geographical and cultural expertise that she acquired without the opportunity to graduate. But Sigrid Undset is even more convincing through human empathy, mature life experience and linguistic expressiveness. Her ability to always reconcile the content and narrative style of her works - from Norwegian sagas to saints' lives to modern prose - is remarkable.

Alongside Olav Duun and Johan Falkberget, Sigrid Undset is one of the authors who had a decisive influence on Norwegian literature at the beginning of the 20th century. All three belong to the so-called neorealists , who stylistically belong to bourgeois realism, but who strive for a deeper psychological drawing of their figures and are nationally oriented.

In Norway, Sigrid Undset - as one of three Norwegian Nobel Prize winners alongside Bjørnstjerne Bjørnson and Knut Hamsun - is counted among the great authors of the 19th and 20th centuries. Norway honors them with an image on the 500 kroner note. In 2002 the asteroid (9919) Undset was named after her. Outside of Norway, however, her works are rarely read.

Bjerkebæk, Undset's former home that is now part of the Lillehammer Museums

After several years of conversion and extensive renovation work, Sigrid Undset's former home in Lillehammer has been open as a museum since the beginning of May 2007. Until then, interested parties had no access to the writer's home. She lived on Bjerkebæk from 1919 until her death. Her private library of around 6,700 volumes, which Borghild Krane cataloged free of charge during her summer vacation from 1965 to 1970, is still there today . According to Krane, the collection includes 2,346 volumes of novels and short stories as well as secondary literature, 1,716 religious books, 1,370 historical works and 1,267 other titles.