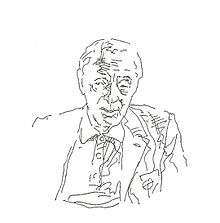 Saul Bellow (born June 10, 1915 as Solomon Bellows in Lachine , Québec , Canada , † April 5, 2005 in Brookline , Massachusetts , USA ) was an American writer and recipient of the Nobel Prize for Literature . His multiple award-winning novels , short stories and essays earned him the recognition of being one of the most important representatives of Jewish-American literature of the 20th century alongside Bernard Malamud and Philip Roth .

Saul Bellow was born Solomon Bellows in 1915 in Lachine, a suburb of Montreal , to a Jewish immigrant family from Saint Petersburg who emigrated in 1913. Bellow spent the first nine years of his life in a multilingual poor district of Montréal, in which numerous Jewish immigrants mainly from Eastern and Southern Europe lived. In addition to English and French, the young Saul Bellow learned Hebrew and Yiddish , which he also spoke at home. He was brought up Orthodox and, according to his mother's wishes, would later become a Talmudic scribe . In 1924 the family moved to Chicago , which Bellow then considered his home and made the setting for many of his works. He himself and his literary work were influenced throughout his life by the Eastern-Jewish urban environment in which he grew up.

In 1934 he began his studies at the University of Chicago , which he continued from 1935 at Northwestern University . There he received his bachelor's degree in social anthropology and sociology in 1937 and then worked at the University of Wisconsin . He married the sociologist Anita Goshkin and worked as a journalist , later as a university professor of literature. For a short time he was also an employee of the Encyclopædia Britannica . He belonged to the international Salzburg seminar .

His early existentialist diary novel Dangling Man attracted attention in 1944. Here the action revolves around a young man who has given up his work in a travel agency to be ready for his call-up. The waiting state in the period between December 1942 and April 1943 makes him that dangling man , ie the “man in limbo”, who experiences the dissolution of his identity and the distance from his former self without any objective. This state of limbo, described in the title of his first novel, as well as the discrepancy between willingness and ability or requirement and feasibility, which the protagonist understands as a dilemma of humanity, also expresses a basic state of mind that is also characteristic of many of the later main characters in Bellow's narrative should be. With his first novel, Bellow also prepared a new direction in American literature: his first novel not only showed Bellow's profound knowledge of the important works of world literature, but also, with its focus on the thematization of the inner alienation and isolation of the protagonist, marked a detachment from the in the aesthetic stoicism prevailing in the 1940s, shaped by the literary model of the Hemingway hero .

Bellow's literary breakthrough came after his initial success in 1953 with the picaresque novel The Adventures of Augie March , whose life-hungry hero, in his attempt to try out different ways of life, clearly stands out from the more passive, reflective and doubting or desperate characters from his earlier works. In the same decade, Bellow published two other novels, Seize the Day (1956) and Henderson the Rain King (1959), which made him increasingly known internationally. While Augie March encompasses an action period of more than three decades in a loose sequence of episodes, the again rather depressing events in the tightly structured short novel Seize the Day are concentrated on the period of a single day on which the 44-year-old protagonist and his previous one Life and come to the conviction that it has failed in crucial areas. In his attempt to build up a strange self, he has taken on burdens and obligations that he can no longer bear. In the end, it remains to be seen whether he will succeed in realizing the Carpe-diem motif of Horace that is echoed in the title in a new life plan. The hero in Henderson the Rain King , who appears as the first-person narrator and who, as a multiple millionaire, suffers no material hardship, is also looking for a satisfying purpose in life and new self-determination. He embarks on a journey to Africa and experiences a series of fantastic, tragicomic and grotesque adventures that repeatedly question his life plans. However, he does not give up and manages to pass the tests he has to face. In doing so, he finally experiences a kind of spiritual rebirth with a spontaneous turning towards the neighbor.

Bellow achieved a great commercial success with the tragicomic novel Herzog , published in 1964 , which many critics consider to be his most artistically successful and most demanding work. In it he dealt with philosophers such as Spinoza , Nietzsche and Heidegger (or with the more distant Oswald Spengler ). In doing so, he took a European as well as an American point of view, trying to combine two identities. With this novel, Bellow triggered a strong response worldwide and also opened up a readership in Germany. The work's title character, Moses Herzog, is a respected Jewish intellectual and university professor who is on the verge of a mental breakdown after the breakdown of his marriage and deep disappointment in his best friend. In order to come to terms with himself again and to realign his present and future, he tries to collect and organize the elements of his life so far, including his childhood memories of life in the Jewish immigrant ghetto of Montreal. He tries to capture his thoughts by writing countless letters to his friends, acquaintances and relatives or to famous personalities of his time, but also of the past. In coping with his personal life crisis, Herzog thus leads, on the abstract level of rationalization, to the confrontation with philosophers and scientists from different times, whose statements he critically reviews. This intellectual inventory of his time, in which Bellow lets the reader participate, ends with Herzog's decision against a fashionable nihilism . He comes to the conviction that the value of man and the finding of meaning for his life are shown precisely in the fact that he proves himself in life and overcomes his personal and practical problems of existence.

The main theme of Bellow's works is the situation of the male, Jewish intellectual in today's USA, who without religious affiliation seeks his way in the struggle of life, especially confused in the struggle of the sexes. The locations of his novels are mainly New York and Chicago. His own minority experience sensitized him to social antagonisms; at the same time he was always a keen assessor of cultural tendencies and changes. In the older years of the author, the protagonists in the works become active characters who master their fate and have an impact on their environment.

Bellow formed together with William Faulkner "the backbone of the American literature of the 20th century", so the assessment of the author Philip Roth .

In 1976, Bellow received the Nobel Prize in Literature “for the human understanding and subtle cultural analysis that are united in his work”. Shortly before, he was awarded the Pulitzer Prize for the novel Humboldts Legacy (English Humboldt's Gift ) .

Despite receiving the Nobel Prize and numerous other awards, Bellow did not achieve the same level of recognition and admiration from the general reading public or in public as other important American authors of the 20th century, such as William Faulkner , F. Scott Fitzgerald or, above all, Ernest Hemingway.

Bellow was married five times, including to the mathematician Alexandra Bellow . He left three sons and a five-year-old daughter at the time of his death.