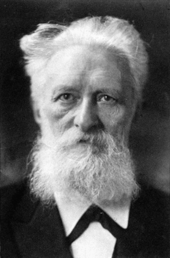 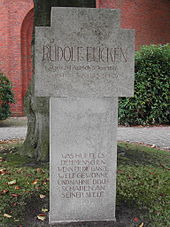 Memorial stone for Rudolf Eucken on the cemetery in Aurich 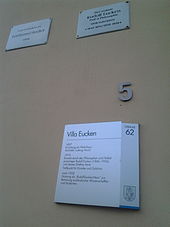 Memorial plaques on Eucken's house in Jena. The panel at the top left reminds of the painter Ferdinand Hodler , who lived in this house in 1908. 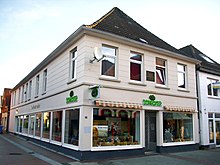 Eucken’s father, the postmaster Ammo Becker Eucken, and his only brother died early; the closer the bond with his mother Ida Maria (née grid man, 1814–1872). After attending the Ulricianum grammar school in Aurich, from 1863 he studied philosophy, classical philology and ancient history with Gustav Teichmüller and Rudolf Hermann Lotze at the University of Göttingen , where he joined a progress movement at the same time as Wilhelm Pfeffer , the later fraternity and today's Corps Frisia . He also sang in the student choir in Göttingen . He then studied in Berlin . He cultivated a closer friendship with the philosopher Friedrich Adolf Trendelenburg . After his doctorate in 1866 on the subject of De Aristotelis dicendi ratione ("About the style of Aristotle "), he worked from 1867 as a high school teacher in Husum and Berlin. From 1869 to 1871 he taught ancient languages ​​and Protestant religion at the municipal grammar school in Frankfurt am Main . At the same time, Eucken continued to deal with questions of the history of philosophy, in particular about Aristotle and Thomas Aquinas .

In 1882 he married Irene (1863–1941), sister of Carl Adolf Passow . This marriage resulted in three children, the chemist Arnold Eucken (1884–1950), the economist Walter Eucken (1891–1950), and the daughter Ida Marie (born January 10, 1888, † October 16, 1943, studied singing (soprano ) and performed with Max Reger , among others ). The children grow up in a cosmopolitan and culturally interested home. The composer Max Reger and writers such as Stefan George and Hugo von Hofmannsthal come and go in the Eucken'schen Villa on Botzstrasse in Jena .

In 1908 Eucken received the Nobel Prize for Literature - "because of the serious search for truth, the penetrating power of thought and the foresight, the warmth and power of representation, with which he represented and developed an ideal worldview in numerous works," as the reason given . This was followed by exchange professorships in England (1911), the USA (1913–1914) and Holland (1914). During the First World War , he supported the national idea. So he signed the Manifesto of 93 , which denied the allegations of the Allies against Germany.

On January 5, 1916 - Eucken's seventieth birthday - he was made an honorary citizen of the city of Jena . The reason given was that, as a professor at the University of Jena, he had contributed “as an ornament to the university to the city's glory” for 41 years. In his books, The Meaning and Value of Life and Spiritual Currents of the Present , Eucken dealt critically with the monism of his Jena colleague Ernst Haeckel , with whom he was personally friends.

At Eucken's suggestion, the Luther Society was founded in Wittenberg on September 26, 1918 .

Eucken's work was widely recognized, especially in Sweden. King Oscar II studied religious-philosophical writings, and Eucken became a member of the Swedish Academy of Sciences . German scholars such as Ernst Haeckel, however, received his award of the Nobel Prize for Literature with rather skepticism. Eucken had more of an outsider position in German science, and the value of his writings was underestimated in terms of linguistic and systematic quality. Rudolf Eucken was a teacher of Max Scheler , who received his doctorate from him. Nowadays, Rudolf Eucken has tended to be forgotten. Ferdinand Fellmann , however, emphasized the similarities with Edmund Husserl's later phenomenology . He described Eucken's “theory of reduction” as a bridge “between German idealism and phenomenology”.