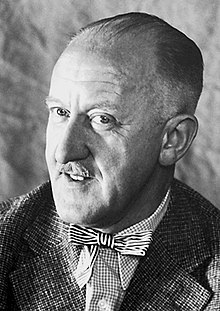 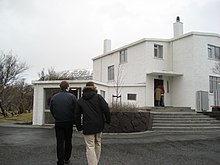 Halldór Laxness was born as Halldór Guðjónsson . His parents were Guðjón Helgi Helgason and Sigríður Halldórsdóttir. Since he came from a wealthy family, he was able to complete his education through numerous trips. On the continent, he got to know Catholicism and converted . He chose the name Kiljan when he converted to Catholicism on January 6, 1923 in the Benedictine monastery of St. Maurice de Clervaux in Luxembourg , after the Irish martyr and Saint Kilian . He took the surname Laxness after the farm Laxnes (Eng. "Salmon Peninsula") at Mosfellsbær , where he grew up.

In 1930 he married Ingibjörg Einarsdóttir. 1945 began his second marriage to Auður Sveinsdóttir and he moved to Gljúfrasteinn in Mosfellsdalur on Þingvallavegur

His oeuvre includes numerous novels and plays, and he was often active as a journalist. His works have been translated into numerous languages. His granddaughter Auður Jónsdóttir is also a writer.

Halldór Laxness died at the age of 95 and was buried in the Mosfellskirkja cemetery in Mosfellsdal.

Laxness' journeys to the continent can be recognized in his early novel The Great Weaver of Kashmir (1927), which has influences from Expressionism and Surrealism and, on the other hand, is occasionally reminiscent of the early Thomas Mann .

Significant works by Laxness are Salka Valka (1931/32), His own Herr (1934–36) and Weltlicht (1937–40). In his own master is about a stubborn small farmers who did not want to give up despite widrigster circumstances its independence (the Icelandic title is Sjálfstætt fólk , German "independent people"). In Weltlicht , he describes the life of a man from the simplest of backgrounds who desperately wants to become a writer and therefore has to fight against many prejudices from those around him.

A well-known book Laxness' is the novel The Icelandic Bell (Icelandic: Íslandsklukkan , 1943–46). Based on historical figures from the time around 1700, such as the linguist Árni Magnússon , it firstly describes the only occasionally happy love story between the scholar and manuscript collector Arnas Arnaeus and the beautiful judge's daughter Snæfríður, and secondly the decades-long trial against the peasant who has been washed away Jón, who has been charged with murder and who has been fleeing across Europe for years. This part of the novel recalls famous picaresque novels like Grimmelshausen's Simplicissimus Teutsch . Both parts are closely linked to each other and to the social and political situation in Iceland at the time; Arnaeus' struggle for the preservation of Icelandic manuscripts and compliance with legal requirements repeatedly raises questions about the identity of Iceland and the legitimacy of its social order.

For a long time Laxness was considered a follower of Marxist-communist teachings. This is expressed, for example, in his novel Atomstation (1948). In this novel, he vigorously opposes the stationing of American missiles in Iceland.

Laxness wrote numerous other novels, including The Happy Warriors (1952), in which he showed the negative sides of saga heroes partly satirically - not necessarily to the delight of all his compatriots. The book was written in deliberately archaic language and is considered by many to be the greatest parody of the Icelandic language.

In the late 1950s he turned away from communism. In his later novels The Fish Concert (1957), The Paradise Found (1960) and Am Gletscher (1968), the social criticism is no longer so clear. In his late work, Laxness is looking for new narrative forms that primarily play with the problem of the narrative perspective . Instead of topics critical of social and religion, Taoist topics found their way into his books.

Some of his novels have been made into films:

Halldór Laxness is considered to be the first modern Icelandic author to achieve world fame. In 1955 he received the Nobel Prize in Literature "for his vivid epic power which has renewed the great art of storytelling in Iceland".

Laxness' other honors include the World Peace Prize in 1953 and the Sonning Prize in 1969 . He received honorary doctorates from the universities of Åbo (1968), Reykjavík (1972), the University of Edinburgh (1977) and the Eberhard Karls University of Tübingen (1982), the latter on the occasion of his 80th birthday.

Due to its long-time communism-friendly attitude, Laxness received more attention in the GDR than in the West German Republic . His post-war works were first translated in the GDR. In the 1990s there was an all-German renaissance of Laxness' works, triggered by a work edition by the Göttingen Steidl Verlag with partly new translations by Hubert Seelow .