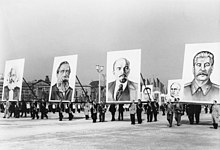 The "creators" of Marxism-Leninism: Marx, Engels, Lenin and Stalin (demonstration on May 1, 1953, East Berlin)

The term Marxism-Leninism denotes the official political ideology of the Soviet Union from the mid-1920s and later that of the entire Eastern Bloc . It was defined by Josef Stalin as "the Marxian doctrine further developed by Lenin under the new conditions of the class struggle in the epoch of imperialism and the proletarian revolutions" .

After Lenin's death in 1924, Marxism-Leninism became the official state doctrine of the Soviet Union, where it was considered the scientific worldview of the working class . Originally only the term Leninism was used . As a result, the pair of terms Marxism-Leninism was primarily used by the communist parties to differentiate themselves from Trotskyism and other groups in opposition to Stalinism , as well as from the reformism and revisionism of social democracy .

The term connection was created to honor Lenin's independent theoretical and practical merits in the further development of Marxism . Based on Stalin, the SED defined Marxism-Leninism as ...

"... the scientific worldview of the working class founded by Marx and Engels and further developed by Lenin, which is continuously enriched by the international communist movement on the basis of the experience of socialist and communist construction and the practice of the revolutionary liberation struggle."

Even after the official Stalin criticism on the XX. At the CPSU convention , the term Marxism-Leninism was continued to be used by the communist and related socialist parties .

Following on from Lenin, Marxism-Leninism is divided into three main components:

Lenin himself did not summarize his worldview under the term Leninism or under the term Marxism-Leninism. Both terms were only used after his death and came up for the first time in the history of the Soviet Union in the dispute with opposition groups about “true Marxism”. Stalin created a personality cult around Lenin and presented his own politics as a direct continuation of the politics of the Bolsheviks in order to differentiate himself from the left opposition around Trotsky , who accused Stalin of bourgeois tendencies. Marxism-Leninism finally became the official state doctrine in the dictatorships of real socialism .

Also Trotskyists and others call themselves Leninists, but distance themselves from Marxism-Leninism from. After it was created under Stalin, critics of this variation of Marxism and the mostly repressive politics associated with it preferred the term Stalinism . Both terms are mostly used synonymously. While Marx, Engels and others abstracted their thinking from the real conditions and the struggles, Marxism-Leninism - especially from the Trotskyist side - is accused of elevating the self-interests of the ruling political caste to the philosophical basis.

Amadeo Bordiga , founder of the Italian Communist Party , publicly rejected the terms Leninism and Marxism-Leninism as early as 1925 and described them as revisionist in a meeting of the Extended Executive of the Communist International .

According to available materials, Stalin spoke of Marxism-Leninism publicly for the first time at the end of the report to the XVII. Party congress of the CPSU (B) on January 26, 1934, namely about " not to cover up the deviations of some comrades from Marxism-Leninism , but to criticize them courageously". Obviously at that time it was a combination of words that only acquired new and greater meaning much later. In November 1938, the CPSU Central Committee condemned “the harmful separation […] between Marxism and Leninism” and introduced the obligatory term Marxism-Leninism - a Marxism-Leninism that de facto only refers to the representation of the Stalinists The interpretation was limited and only had a few “suitable” quotations from Marx, Engels and Lenin here and there. But since the CPSU (B) and Stalin had dominant influence in the Comintern, the term Marxism-Leninism coined by Stalin was later often equated with that of Stalinism , especially during the Cold War .

Before Stalin's death, there was a political break between the Soviet Union and Mao Zedong's China (→  Sino-Soviet rift ). The Soviet Union and the People's Republic of China each identified themselves as the true heirs of Marxism-Leninism. The Chinese Communist Party claimed to have adapted the ideas of Marxism-Leninism (including the works of Stalin) to the Chinese situation, but linked this to a universal claim to validity. This current of Marxism was later named Maoism. Parties and movements that sympathized with the Chinese Communist Party took up this variation of Marxism-Leninism and orientated themselves politically to Maoism. Since China's market economy liberalization, most Maoist parties have taken the view that the Chinese leadership has turned away from the principles of Maoism (and thus Marxism-Leninism) and accuse them of revisionist tendencies.

Marxism-Leninism is mostly used as a name part by Maoist organizations and parties. However, apart from Nepal and India, none of these parties play a significant role in national politics. Usually such parties want to distinguish themselves from other communist parties that they accuse of revisionism. The Black Panther Party in the USA also invoked Maoism.

In North Korea in 1977 the Chuch'e ideology (also Juche or Zuche) replaced Marxism-Leninism. In the works of Kim Il Sung and Kim Jong Il there is always talk of the "raised red banner of Marxism-Leninism and the Juche idea". The fight against revisionism, dogmatism and formalism is particularly important. According to the Juche ideology, the revolution can only be made by one's own people; Socialism must be linked to the particular cultural, political and historical conditions of the respective country, i.e. no formal adoption of the model of another socialist country.

To what extent Titoism in Yugoslavia can be assigned to this Marxist tendency remains controversial. Some elements such as the personality cult or the alliance with the peasant class can also be found in Titoism, the workers' self-management and the balance of nationalities are again features that distinguish it from classic Marxism-Leninism.

Others, especially the Eurocommunists , have distanced themselves from official Marxism-Leninism and instead mostly refer to "Marxism" or "Leninism".

Characteristic of the canonization of Marxism called Marxism-Leninism is - based on the orthodoxy of classical social democracy - in addition to the personality cult around Lenin, Stalin and other heads of state, in particular the creation of a dogmatic Marxist philosophy and economic theory. Critics often question the continuity of the work of Marx and Engels. While Engels spoke of historical materialism, Marx and Engels never used terms such as dialectical materialism - a term that comes from Joseph Dietzgen -, labor theory - the term was first used by Karl Kautsky - or socialist political economy for their teachings. Marx and Engels always spoke of a critique of political economy (of capitalism ) and by no means created their own socialist economic theory.

The differences to related currents are less of a philosophical nature, but rather the result of a certain economic and social pressure, which usually led to a break between friendly state socialist regimes (Yugoslavia-Soviet Union; China-Soviet Union; Albania-China; North Korea-China ...), as well as expressing different national interests. Here the views of the opposing party are often referred to as revisionist. Maoism, for example, refers to Stalin. On the other hand, after the break of the USSR with the People's Republic of China under Mao Zedong, Soviet policy was called revisionism. The situation is similar with the criticism of the reform efforts of Khrushchev , Dubček , Gorbachev and others, which older communists mostly described as revisionist.

The strong personality cult of these regimes often contributed to political crises after the death of a head of state. For example, Yugoslavia fell apart a decade after Tito's death . Nevertheless, the respective state ideologies cited here continue to exist.

Another peculiarity of Marxism-Leninism is its vague relationship to fascism . If fascism was underestimated during National Socialism , many politically right-wing military dictatorships were later referred to as "fascist". The characterization of fascism by Georgi Dimitrov in 1935 also contributed to this. The Dimitrov thesis describes fascism as "the open terrorist dictatorship of the most reactionary, most chauvinist, most imperialist elements of finance capital ."

For Trotsky, on the other hand - one of the most staunch Marxist critics of orthodox Marxism-Leninism - fascism was not just an extreme form of capitalism; The subjective factor was also decisive for him. Accordingly, fascism could only win if the rulers could rely on a mass movement of the radicalized middle classes. In contrast to other currents, Marxism-Leninism - especially Maoism - offers a primarily moral, less sociological analysis of fascism. For example, Maoist groups in Turkey describe them as fascist.

Regardless of the philosophical differences, critics regard the following political views in the various state socialist regimes - including Albania under Hoxha - as commonalities of Marxism-Leninism: