Bolshevik is a redirect to this article. Further meanings are listed under Bolshevik (disambiguation) .

Bolshevik Party Congress, with Lenin on the right. The other participants (from left): Yenukidze , Kalinin , Bukharin , Tomsky , Laschewitsch , Kamenev , Preobrazhensky , Serebryakov and in front Rykov . 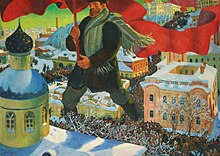 The Bolsheviks ( Russian Большевики , wiss. Transliteration Bol'ševiki , IPA : [bʲʂɨlʲʂɨvʲɪˈki]; also Bolsheviks; literally translated "majority") were a radical faction under the leadership of Vladimir Ilyich Lenin within the Russian Social Democratic Labor Party (SDAPR). They strived not only for social reforms, but also for the overthrow of the tsar as well as socialism and communism through a “ democratic dictatorship of workers and peasants ” and from August 1917 a dictatorship of the proletariat based on workers' councils , also called soviets in Russia . Lenin's April theses played a decisive role in changing her policy . In contrast to the moderate faction of the Mensheviks , they organized themselves as a tight cadre party ( party of a new type ), as a group of professional revolutionaries .

The term Bolsheviks (from Russian bolschinstvo / большинство for "majority") does not reflect the general proportion of votes within the Russian Social Democratic Workers' Party (RSDLP). Only at the 2nd party congress in Brussels and London in 1903, at which Lenin demanded the overthrow of the tsarist rule in Russia and for this purpose the transformation of the RSDLP into a revolutionary cadre party, was his group able to win a narrow majority, also because the delegates of the general had previously Jewish Workers' Association had left the meeting because of disputes over the status of the organization. As a result, the term Bolsheviks (Russian for “majority”) became the self-designation of the radical wing of the party around Lenin, but the actual majority was held by the moderate Mensheviks until the final factual breakup of the party as a result of the 6th party conference in Prague in 1912, the 1903 of Julius Martov were led.

When the First World War broke out , the Bolsheviks condemned Russia's participation as imperialist aggression . Since the tsarist army had to accept more and more setbacks in the course of the war, the party grew rapidly. When, after the end of tsarist rule as a result of the February Revolution in 1917, the Provisional Government led by Social Revolutionary Alexander Kerensky also did not end its participation in the war, the Bolsheviks also gained more and more influence in the Petrograd Soviet and finally formed the strongest faction there from the summer of the same year and after some time the chairman ( Leon Trotsky ). They also gained a majority in the Revolutionary Military Committee, which later organized the October Revolution . Due to the dissolution of the Provisional Government by Red Guards on October 25th, July / 7th November 1917 greg. and the crushing of the Constituent Assembly soon afterwards made the Bolsheviks de facto the sole ruling power in all of Russia.

After the October Revolution

In terms of foreign policy, the Bolsheviks tried to anchor their revolution in Western Europe as well, as this was the only way they saw the chance for Soviet Russia to survive . There were therefore intensive contacts with revolutionary and left-wing socialist parties and groups in Germany , such as B. the USPD and the Spartacus group .

In the Russian Civil War (around 1918–1922) the socialist Red Army fought against the reactionary , foreign-backed White Army , which consisted of parts of the old tsarist military and volunteers, the Czechoslovak Legion , the intervention troops of the Western powers and Japan and Poland . Among other things, the Bolsheviks made pacts with the Machnovshchina , a popular movement in the Ukraine led by Nestor Machno , which contributed significantly to the suppression of General Wrangel's troops . When Makhnovshchina refused to submit to the Bolsheviks, the movement was crushed by the Red Army in the summer of 1921.

With the help of the Red Army built up by Trotsky against much resistance with the help of former tsarist officers on the model of a Western army, the new Bolshevik regime successfully took action against the counterrevolutionaries they designated as such. By 1922, the Bolsheviks managed to control almost the entire east of the vast Russian Empire.

In addition, the civil war was associated with considerable terror behind and on the fronts, as was so-called war communism , an economic policy that placed all companies under state control. Further repressive measures led to extreme supply bottlenecks and thus to uprisings within the population. In 1921, the New Economic Policy replaced war communism.

Since their VII Party Congress, which met from March 6 to 8, 1918, the Bolsheviks called themselves the Communist Party of Russia (KPR (B)) and, from 1925, the Communist All-Union Party with the appendix (Bolsheviks) - WKP (B).

In their own country, especially during Stalin's time, repression against the Soviet population increased. The secret police ( Cheka , GPU ) suppressed all opposition , arrested many critics and potential enemies and executed them. In this way the Communist Party ruled the country for a long time.

In 1952 the term Bolsheviks was removed from the party names of the CPSU and abolished in the official language of the Soviet Union.