Hans Jakob Christoffel von Grimmelshausen came from an impoverished aristocratic family who came from the Thuringian village of Grimmelshausen an der Werra and had settled in Gelnhausen in the 16th century. At that time Gelnhausen was a Protestant free imperial city in the Kinzig valley in what is now the state of Hesse , but was pledged by the empire to the Electoral Palatinate and the county of Hanau-Münzenberg in equal parts. Grimmelshausen's grandfather, a baker and innkeeper, gave up his title of nobility in 1592.

There is no clear documentary evidence for Christoffel's first twenty years of life. His father Johann Christoph died when Christoffel was four or five years old. The widow married again soon afterwards and moved to live with her second husband in Frankfurt am Main . Her son stayed behind in Gelnhausen, grew up with his grandfather and attended the local Latin school . In September 1634, the Thirty Years War (1618–1648) reached the city. It was captured and devastated by the imperial troops of the Roman Catholic party, the same was repeated in January 1635. A large part of the inhabitants, including very likely Grimmelshausen, fled to the nearby fortress Hanau , which was run by General Jakob von Ramsay and Swedish - was held by the Lutheran military.

There are indications that Grimmelshausen was involved in the siege of Magdeburg as a pack boy in the summer of 1631 and belonged to an imperial dragoon regiment in Westphalia in 1637 , but not yet as a regular soldier because of his youth. In 1639, now 17 or 18 years old, he was an active fighter in the regiment of Imperial Colonel Hans Reinhard von Schauenburg. There he was promoted to clerk in the regimental office, since 1644 there have been documents from his hand. In 1648 he served as a clerk in the regiment of Colonel Johann Burkard von Elter in Wasserburg am Inn . In July 1649 he finished his military service in Vilshofen in the Upper Palatinate.

Apparently around this time Grimmelshausen converted to the Catholic faith, in any case his marriage on August 30, 1649 in Offenburg took place according to the Catholic rite. The bride's name was Catharina Henninger and was the daughter of a regimental sergeant. In the marriage certificate, the nobility predicate "von" , which the grandfather had discarded, was used again in connection with "Grimmelshausen". After the wedding they both moved to Gaisbach im Renchtal  - today a district of Oberkirch in Baden-Württemberg  - where Grimmelshausen worked from 1649 to 1661 as estate and castle administrator ("conductor") for the Counts of Schauenburg . During his time there, Gaisbach Castle was expanded , for which stones from the Schauenburg Castle were used. In addition, from 1656 to 1658 he ran the restaurant "Zum Silbernen Stern" in the Schaffnerhaus in Gaisbach. From 1662 to 1665 he was castle vogt on the neighboring Ullenburg , which is owned by the Strasbourg doctor Johannes Küffer the Elder . J. (1614-1675) located. After another attempt as an innkeeper, he joined in 1667 as mayor of Renchen in the service of the Prince Bishop of Strasbourg , Franz Egon von Furstenberg , whose territory this village belonged. He was responsible for the lower jurisdiction on site, for collecting taxes and duties and for maintaining public order.

In 1673, the French King Louis XIV , supported by Grimmelshausen's employer, the Bishop of Strasbourg, opened a new theater of war against the imperial troops in the French-Dutch war on the Upper Rhine . Renchen and its surroundings were also affected by the heavy strain on the country and its people. Grimmelshausen was apparently doing military service again. About his death on August 17, 1676 is noted in the Renchen church book: “The honorable Johannes Christophorus von Grimmelshausen, a man of great intellect and high education, mayor of this place, and although he did military service because of the turmoil of the war, and his children died in the Lord were scattered in all directions, they all came together on this occasion, and so the Father died, piously strengthened by the sacrament of the Eucharist , and was buried. May his soul rest in holy peace. ”Grimmelshausen's wife Catharina, with whom he had ten children, died on March 23, 1683.

It remains unclear when exactly Grimmelshausen began his work as a writer. An indication is provided by the fact that all of Grimmelshausen's works were published in the last ten years of his life, i.e. since 1666. Numerous documents that he wrote as regimental clerk and castle administrator have survived, but neither manuscripts , diaries nor letters about his writing activities or his private life . With only three exceptions, he published his books under pseudonyms . He preferred to use anagrams that he formed from his name, shortened by the components "Hans" and "Jakob": "Melchior Sternfels von Fuchshaim", "Simon Leugfrisch von Hartenfels", "Michael Rechulin von Sehmsdorff", "Samuel Greifnson von Hirschfeld "," German Schleifheim von Sulsfort "," Israel Fromschmidt von Hugenfelß "," Erich Stainfels von Grufensholm "," Philarchus Grossus von Trommenheim ". It was not until 1837, a good 150 years after Grimmelshausen's death, that Hermann Kurz succeeded in resolving these anagrammatic pseudonyms and tracing them back to the real author Grimmelshausen. In particular for the history of the reception of Grimmelshausen's works, it is therefore important that the work unit under the author's name Grimmelshausen only owes itself to a subsequent “decryption”. On the other hand, the contemporary view only offers a heterogeneous amount of pseudonymous published writings that are linked to one another by fictitious authorship drafts. 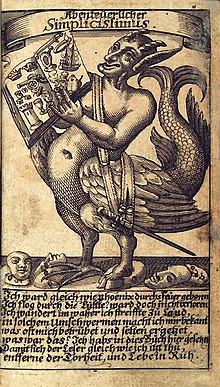 Frontispiece of the first edition, 1669

Grimmelshausen's main work The adventurous Simplicissimus Teutsch , published 1668/69, is a baroque novel of vital versatility. The author paints a detailed picture of the Thirty Years' War and the overgrown German society after the war. Former representatives of literary criticism and scholarship saw the meaning of the work either in the description of personal experiences or in the "abundance of real mood". Such evaluations ignored the fact that Grimmelshausen playfully used set pieces from the classical literature of antiquity as well as from the genre of the Spanish and French picaresque novel ; Mateo Alemán's Guzmán de Alfarache (German 1615) and Charles Sorels Francion (German 1662) should be mentioned here in particular. In addition, the extremely well-read author has processed an astonishingly large number of other templates from different areas of knowledge of his era in his multi-layered novel.

What is striking is the contrast between the hero's longing for peace - it is already mentioned in the caption of the title copper and forms a leitmotif of the entire novel - and the bloody soldier's life and wild adventurism, which Simplex gets into either through external doom or through one's own efforts. There are demonstrably some biographical parallels between Grimmelshausen and his main character , but not a complete match. Even haunted fighting scenes can often be traced back to their literary sources as reading fruits of the author. Scholarly excursions and hilarious scenes, instruction and entertainment alternate with each other in the appropriate language gesture. Often bitter truths are presented in an entertaining satirical form. Last but not least, the novel is an allegorical one, which, according to a narrative style that was still widespread in the 17th century, contains further, more or less difficult to understand, levels of meaning “behind” or “above” the foreground plot. 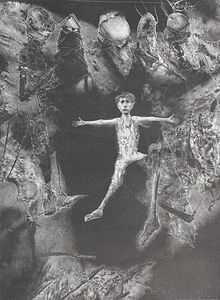 Rolf Münzner : The boy and the power (1991). Lithograph for Simplicius Simplicissimus.

After the baroque editions of “Simplicissimus Teutsch”, new editions carefully related to the original did not follow until the 19th century:

The first edition of Simplicissimus Teutsch contained only books one to five, since 1669 part of it constantly as the sixth book is a continuation ( Continuatio ). Four more books followed by 1675, in which episodes from the life of Simplicissimus are commented on, corrected or put in a different light. It is not known whether Grimmelshausen planned these works as a cycle from the outset. At least in retrospect, he understood it that way and explained in the preface to the tenth and last book that "everything from these Simplician writings is linked / and neither the entire Simplicissimus, nor one [of the parts] alone can be adequately understood without such a combination."

The Simplician cycle consists of the following works:

Popular writings of a satirical character are also part of Grimmelshausen's oeuvre:

There are also some broad-based, gallant art novels in the style of his time: 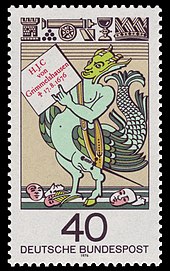 Special stamp for the 300th anniversary of death 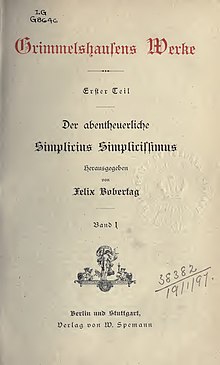