from Wikipedia, the free encyclopedia
This is the spotted version , flagged on July 26, 2020 . There are 2 pending changes that have yet to be viewed.

Oberkirch is a city in the west of Baden-Württemberg , about twelve kilometers northeast of Offenburg . After the district town of Offenburg and the towns of Lahr / Black Forest , Kehl and Achern, it is the fifth largest town in the Ortenau district and belongs to the central area of Offenburg in the regional center of the same name .

Since January 1st, 2004 Oberkirch has been a major district town . With the city of Renchen and the community of Lautenbach , the city has entered into an agreed administrative partnership.

View from the ruins of the Schauenburg to Oberkirch

Oberkirch is located on the edge of the Upper Rhine Plain at the entrance of the Renchtal into the Black Forest .

Coming from the Black Forest in the southeast, the Rench enters the urban area, then flows through the city ​​center in a northwest direction (the old town is on the right bank), then the Stadelhofen district and then leaves the urban area in the northwest towards the Rhine . Oberkirch has two exclaves that are located in the northern Ortenau in the Maiwald.

The following cities and communities border the city of Oberkirch. They are named starting in the north in a clockwise direction : Renchen , Kappelrodeck , Lautenbach , Oppenau , Nordrach , Durbach and Appenweier (all of Ortenaukreis).

The urban area of ​​Oberkirch is divided into the core town and the districts of Bottenau , Butschbach , Haslach , Nussbach , Ödsbach , Ringelbach , Stadelhofen , Tiergarten and Zusenhofen, which were incorporated as part of the municipal reform of the 1970s .

The districts with the exception of Butsch Bach are both towns in terms of Baden-Wuerttemberg Municipal Code, that is, there is one of the voters in each municipal election to be elected Ortschaftsrat with a mayor as chairman. The local councils have between six and ten members, depending on the size of the village.

In detail, the following residential spaces belong to the districts:

Oberkirch was first mentioned as Obernchirchen in the 11th century. The settlement was probably created by the Zähringers and was located north of today's city. Probably after 1218 the place came to the empire and was given to the margraves of Baden as a fief. In 1225 it was mentioned as civitas and later as oppidum. In 1246 the place was burned down and then rebuilt at its current location. Oberkirch came to the diocese of Strasbourg in 1303 via the Fürstenbergs . In 1326 he was granted city rights. Except for a few interruptions, it was ruled by the Strasbourg bishops, but it was partly given to fiefdoms (1604 to 1634 and 1649 to 1665 to Württemberg and 1683 to 1697 to Baden). In the 15th century Oberkirch became the seat of a bailiff who was responsible for several courts in the surrounding area. In the Thirty Years' War it was heavily damaged, as in 1689, but then rebuilt (except for the church).

After the Second World War the district of Offenburg belonged to the state of Baden and from 1952 to the administrative district of South Baden . During the district reform on January 1, 1973, the district of Offenburg was dissolved. He was assigned to the newly formed Ortenaukreis . The incorporation of nine surrounding communities in the early 1970s created the conditions for the population to exceed the 20,000 mark in 2002. As a result, the city administration applied for a major district town , which the state government of Baden-Württemberg then decided with effect from January 1, 2004. Oberkirch thus became the fifth major district town in the Ortenau district.

Gaisbach , first mentioned in 1225 "in the Geißbach", developed at the foot of the Schauenburg , which made up an independent territory of the knighthood of Ortenau and came to Baden in 1805.

Nussbach was first mentioned in 994 as Nuzbach and Zusenhofen in the 12th century as Uzzenhöfen. These villages belonged to the Landvogtei Ortenau, which was in front of Austria.

The following communities were incorporated into the city of Oberkirch:

Population figures according to the respective area. The figures are census results (¹) or official updates from the respective statistical offices ( main residences only ).

The name Oberkirch refers to a chapel that was assigned to the church in Nussbach before the 13th century. In 1225, an existing chapel was raised by the Strasbourg bishop Bertold von Teck to a church that had to be permanently occupied by a clergyman and was occupied with pastors by the Allerheiligen monastery . In 1803 the places became part of the Diocese of Constance before they became part of the newly founded Archdiocese of Freiburg in 1821/27 . The communities then belonged to the dean's office in Oberkirch. Today all communities in the Oberkirch urban area belong to the deanery Acher-Renchtal . There are the following Catholic parishes (for their churches see under Buildings): St. Cyriak Oberkirch (with Butschbach and since 1937 also with Ringelbach), St. Sebastian Nussbach (with Bottenau), St. Jakob the Elder Ödsbach (own parish since 1932 ), St. Wendelin Stadelhofen (own parish since 1887), St. Urban Tiergarten (own parish in 1875) and St. Joseph Zusenhofen (own parish since 1961). St. Aloysius Haslach was a subsidiary of Renchen-Ulm and is now part of the Oberkirch pastoral care unit.

At the beginning of the 19th century Protestants also moved to Oberkirch. The Protestant congregation received its own church in 1866. Since the 1st of Advent 2016, the Protestant church has been called the Martin Luther Church. The Protestants of all nine districts also belong to the Protestant community: Bottenau, Butschbach, Ödsbach, Ringelbach, Tiergarten, Haslach, Stadelhofen, Nussbach and Zusenhofen. The evang. Parish Oberkirch belongs to the Evang. Ortenau church district, Kehl region, the Evangelical Church in Baden .

For the Muslims in Oberkirch, who are predominantly of Turkish origin, the Turkish Association Oberkirch e. V. a mosque on Oberdorfstrasse.

The municipal council is directly elected for five years and has 26 members who are called City Councils.

The local elections on May 26, 2019 led to the result shown in the adjacent diagrams.

At the head of the city of Oberkirch stood the mayor appointed by the bishop . There is also evidence of a council since 1327. In Baden's time, the mayor and the local council ran the city administration. Since it was raised to the status of a major district town in 2004, the mayor has been named mayor . He is directly elected for a term of eight years. He is chairman of the municipal council . His general deputy is the first alderman with the official title "Mayor".

The mayors and mayors

The coat of arms of the city of Oberkirch shows under a red shield head, in which a silver sloping bar, split by blue and gold, in front on a green three-hill a silver church with roof turrets, behind a black lion covered with a continuous, multi-toothed red tournament collar. The city flag is red-white-red. The coat of arms has been in use since 1896, but it was not established in its current form until 1968. The flag has been in use since 1926.

The church as a so-called "talking coat of arms" is already included in the seal imprint from 1338. In 1570, the then bishop of Strasbourg, Johann IV. Count von Manderscheid-Blankenheim, allowed his coat of arms to be used as the city's coat of arms. But the shape was not determined until the 19th century. The sloping beam is the coat of arms of the diocese of Strasbourg, the lion that of the Lords of Blankenheim.

Oberkirch maintains a town partnership with the following cities : 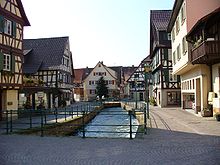 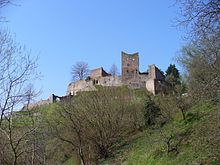 The Heimat- und Grimmelshausen Museum is located in the old town hall. Among other things, it provides information about the city's history and the life of the poet Hans Jakob Christoffel von Grimmelshausen , who wrote his work “ Simplicissimus ” in Oberkirch . The municipal gallery, which is also located there, regularly presents well-known artists from home and abroad.

One of Oberkirch's landmarks is the Schauenburg ruin, which dates back to the 11th century and stands 200 meters above the town. Von Grimmelshausen worked there as the castle administrator after the Thirty Years' War . At the end of the war in the years 1650–1660 he had the south tower of the Schauenburg removed and the stones rolled into the valley to build the Gaisbacher Schloss . Hans Jakob Christoffel von Grimmelshausen as administrator of Hans Reinhard von Schauenburg (defender of Offenburg) was also the host of the Gasthaus zum Silbernen Stern in Gaisbach.

There is also the Fürsteneck ruin . The ruins of the Ullenburg are located in the Tiergarten district .

The old town still has some historic half-timbered houses and baroque buildings as well as fragments of the old city wall. The Catholic parish church of St. Cyriak, on the other hand, was only built in 1863 in the neo-Romanesque style instead of a previous building that had been demolished. The Protestant town church was built in 1866 on the site of the former Capuchin monastery that was demolished in 1847.

In contrast, there is the media library that was inaugurated in 2010. This leisure, educational and cultural facility impresses with its modern design language, which has also been recognized in the relevant specialist circles.

There are the following churches and chapels in the districts:

The SV Oberkirch is the local football club, which is best known for its success in the 60s in all of southern Baden. Today the senior team plays in the Offenburg district league.

Another successful sports club is the Oberkirch shooting club . The shooting club has been successful nationally, internationally and on the southern Baden level in various disciplines and age groups since the 1980s. Numerous members were members of the national team or won titles at national level.

Agriculture in Oberkirch is characterized by viticulture and fruit growing . There is also the paper and textile industry as well as mechanical engineering . Oberkirch is the headquarters of the August Koehler paper mill and the publicly traded automotive supplier Progress-Werk Oberkirch .

In viticulture, the local cooperative winegrowers are influential. Most of the vineyards are cultivated by members of the Oberkirch winegrowers' cooperative . Pinot Noir and Riesling wines (also known as “Klingelberger” in the region) are the most popular types of wine.

In the Oberkirch area there were also mines that extracted fluvial and barite underground . These were the Hesselbach and Ödsbach pits.

For the "Spatwerk Hesselbach" owned by Hans Grimmig, a tonnage 45 m long shaft is specified for 1948 , from which a raw production of 4030.5 t fluorspar and 252 t heavy spar took place in 1949 via three blind shafts and two tunnels .

The same corridor system as for the Hesselbach mine also formed the basis for the Ödsbach mine. This is mentioned for the first time in 1911 by Freiherr von Verschuer. In 1914 the conveyor tunnel had already reached a length of 175 m. In 1920 the main tunnel was 240 m long. In 1921 there was a workforce of 45 men. In 1931 the 64 m level was laid over a shaft and this shaft was equipped with an electric hoisting machine . There were other smaller spar pits in Bottenau and in the Durbach Valley.

The city can be reached via a railway line from Offenburg via Appenweier. The city belongs to the tariff association Ortenau , which serves local public transport (ÖPNV) through several bus lines. In addition, the Ortenau S-Bahn serves the city ​​of Oberkirch ( Renchtalbahn ). The ring bus has existed since 2005. This travels the city and its districts with three lines.

The bypass of the federal highway 28 has relieved Oberkirch and Lautenbach from through traffic since August 2014. Over a total length of six kilometers, the regional traffic on the important west-east connection between Strasbourg and Tübingen can pass the Renchtal without crossing Oberkirch and Lautenbach. The construction time was seven years. The heart of the 69 million euro project are the two tunnels.

The Acher-Rench-Zeitung of the Mittelbadische Presse reports on local events in Oberkirch as a daily newspaper .

The Ortenaukreis is responsible for the Renchtal School for people with language disabilities.

The city of Oberkirch has granted the following people honorary citizenship:

Cities and communities in the Ortenaukreis