Appenweier is a municipality in the Ortenau district in Baden-Württemberg and is located around seven kilometers north of the regional center of Offenburg .

Appenweiers was first mentioned in a document in 884 . This makes Appenweier one of the oldest written places in the Ortenau district.

Witch hunts were carried out in Appenweier from 1575 to 1630 . 35 women and men got into witch trials and were executed.

In the Thirty Years' War the place was the victim of the worst devastation, which continued in the following revolutionary wars. In 1632 Appenweier was burned down by Swedish troops, followed by arson by French troops in 1689 .

In 1750 the church consecrated to St. Michael was rebuilt in the old town center in rococo style. Appenweier belonged to the Landvogtei Ortenau until 1805 and then came through the Reichsdeputationshauptschluss to the Grand Duchy of Baden , where it belonged to the administrative district of Kehl, which later became the district of Kehl . Due to the district reform , the place fell in 1973 to the Ortenaukreis.

Population figures according to the respective area. The numbers are estimates, census results (¹) or official updates from the Baden-Württemberg State Statistical Office

The municipality council in Appenweier consists of 19 members and the mayor as chairman. The mayor is entitled to vote in the municipal council. The local elections on May 26, 2019 led to the following preliminary final result.

The coat of arms of Appenweier shows Saint Michael with a blue robe and spread wings, standing on a green dragon against a golden background. St. Michael holds a black lance in his right hand and a shield in his left. The official blazon reads: In gold, a blue armed archangel (Michael) standing on the belly of a lying, two-legged, green dragon, thrusting a black spear into the jaws with his right hand, holding a blue shield with a continuous gold cross in his left.

Appenweier has a partnership with the following city : 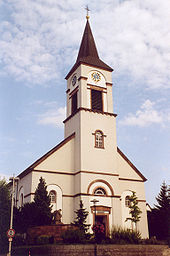 View of the hamlet Zimmer with the pilgrimage church

A skater scene has been established in Urloffen since the 1990s, with its central meeting point at the skater area on Gewerbestrasse in Urloffen. The main occupation is skating with the skateboard , whereby inline skaters and BMX riders are also active in the scene . In 2012 and 2013, the municipality of Appenweier invested in new concrete ramps and the extension of the system by a mini ramp. In addition to expanding the catchment area of ​​the skate facility to include the region around Bühl, Offenburg, Achern and Oberkirch, this increased the variety of skate opportunities and the capacity of the facility to accommodate people.

The White Automotive GmbH is the largest employer in the town of Appenweier with over 500 employees. Weiss is a system supplier to the automotive industry for the production, painting, assembly and logistics of plastic add-on parts in the exterior area.

The company Klocke Pharma-Service , which belongs to the Klocke Group and is based in the Urloffen district, is the second largest employer in the Appenweier community with over 300 employees. The group's companies specialize in contract manufacturing and packaging of pharmaceuticals, vaccines and cosmetic products.

In the Urloffen district there are several horseradish growing and processing companies. The horseradish festival is celebrated there twice a year.

The former record player manufacturer Dual operated a factory in the Urloffen district that produced from 1971 to 1980.

Appenweier is a railway junction where a total of three railway lines meet. The Rhine Valley Railway connects Appenweier with Mannheim via Karlsruhe , as well as Basel via Offenburg and Freiburg im Breisgau . The Europabahn connects with Strasbourg in France via Kehl and the Renchtalbahn branches off to Bad Griesbach .

A big problem for Appenweier is the planned new threading of the Europabahn into the Rheintalbahn. A high-speed route is planned that would actually divide the town of Appenweier, against which there is strong resistance. Alternatively, it would be possible to run the high-speed trains between France and Germany over the disused and partially dismantled Rœschwoog – Rastatt railway line , which would allow a considerable acceleration and would not require any major construction work in Appenweier.

Cities and communities in the Ortenaukreis