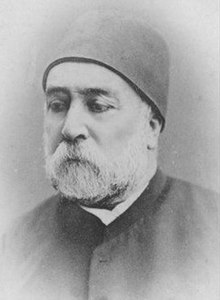 Mahmud Nedim's father was Nacib Pasha , ex- Governor General of Baghdad . After holding various subordinate posts at the gate, he successively became Secretary of State for Foreign Affairs, Governor General of Syria and Smyrna , Minister of Commerce and Governor General of Tripoli , Minister of Justice and Minister of the Navy (1869), Grand Vizier from 1871 to 1872 and from 1875 to 1876. He was highly favored by Sultan Abdülaziz and fell very much under the influence of General Ignatjew , the energetic Russian ambassador before the war of 1877/78 , and his benevolence towards Russia earned him the nickname Mahmudoff . His administration was utterly unsuccessful from any point of view, and he was largely responsible for issuing the disposition which suspended the interest on Turkish funds. From 1879 to 1883 he was Minister of the Interior.