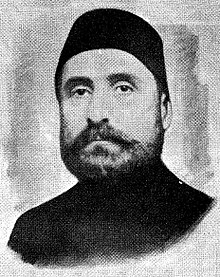 Mehmed Rüşdi was born in poor conditions in the coastal town of Ayancık on the Black Sea in 1811 as the son of the boatman Hasan Ağa. At the age of three, the family moved to Istanbul , where he also attended school. After graduation, he was recruited by the military and studied with a Count Tănase. This taught the boy the French language. Sultan Abdülhamid II recognized the young man's talent, brought him to court and hired him as a translator. Mehmed Rüşdi Pascha quickly became known in the empire for his translations. Two of his most important translated texts were manuals of French military tactics and military training. After these translations he was promoted again and sent to England to study and translate more Western works. Rüşdi was thus surrounded by Western ideas that resembled his reformist colleagues with whom he later pushed for Tanzimat reforms.

In 1839, at the age of 28, Mehmed Rüşdi was promoted to Mir alay (regimental commander with the rank of colonel) and served in Rumelia and Anatolia. He continued his military career, was appointed Mirliva of the army in Rumelia in 1843 and was promoted to Ferik in 1845 . Soon he was appointed a member of the Council for Military Affairs ( Dâr-ı Şûrâ-yı Askerî ). In 1847 he was appointed commander of the 1st Army and in 1851 chairman of the council for military affairs and thus minister of war, a position he also held in 1855 and 1857. In May 1851, the sultan appointed him Serasker and thus commander in chief of the Ottoman army, a position he held several times until 1869. In 1854 he became a member of the High Reform Assembly ( Meclis-i Âlî-i Tanzîmat ), which was supposed to advise on reform of the Ottoman state.

On June 5, 1866, Mehmed Rüşdi Pasha was appointed Grand Vizier of the Ottoman Empire for the second time, despite the anti-reformist opposition in the government. Although Mehmed Rüşdi Pasha defeated his rivals in the government in the struggle for office, internal opposition to the reforms led to his being dismissed for the second time on February 11, 1867.

On October 19, 1872, Sultan Abdülaziz Mehmed Rüşdi Pasha appointed Grand Vizier for the third time in his political career. This term of office was also short-lived and ended after only about four months. Mehmed Rüşdi Pascha was again pushed out of office because of his reformist views.

In the 1870s there were numerous uprisings within the empire. Students held demonstrations and spread reformist ideals. The civil uprising and unrest led to the popular Mehmed Rüşdi Pasha being reappointed Grand Vizier of the Ottoman Empire on May 12, 1876. This was done to appease the reformists and contain the unrest. This did not save Sultan Abdülaziz, however, he was murdered on May 30, 1876 by his ministers with the participation of Mehmed Rüşdi Pascha. The sultan's assassination was passed off as a suicide.

After the assassination of Abdülaziz, officials of the Ottoman Empire, including Mehmed Rüşdi Pascha, appointed Murad V as the new sultan, because they believed that they could implement their reforms. Murad V. was strongly influenced by the ideas of the Tanzimat reforms. He was also impressed by the French and other Western cultures. Mehmed Rüşdi Pasha continued to serve as Grand Vizier under the new Sultan and gained power. Murad V was supposed to adopt an Ottoman constitution , which, however, did not succeed even with the support of Mehmed Rüşdi Pascha. So Murad V was replaced by his brother Abdülhamid II . Mehmed Rüşdi Pascha didn't like Abdülhamid II, whose negligence and lack of concentration on government affairs bothered Mehmed Rüşdi Pascha. He resigned on December 19, 1876 at the age of 65 from his position as Grand Vizier because he did not agree with Sultan Abdülhamids II. On December 23, 1876, the Sultan passed the constitution by decree, which for the first time provided for a limitation of the Sultan's power through a parliament in two chambers, whose Chamber of Deputies emerged from elections. However, the parliament was closed again by Abdülhamid II after the Russo-Ottoman War (1877/78) and was not reconvened until the Young Turkish Revolution in 1908.

Mehmed Rüşdi Pascha was appointed on May 28, 1878 for his fifth and final term. He immediately began investigating the murder of the former Sultan Abdülmecid I. After making several allegations and continuing the investigation into the attack, he was released from office after just a week. Following his allegations, he was charged and questioned before the highest court of the Ottoman Empire, but was not convicted due to his state of health. The Sultan sent Mehmed Rüşdi Pasha into exile.

Mehmed Rüşdi Pascha died on March 27, 1882 at the age of 71 in Manisa of a neurological disease. His body was buried in the garden of Hatuniye Mosque.