This article covers the month of February. For the album of the band Silly see February (album) . 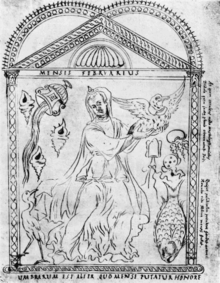 The month of February in the chronograph of 354 by the late antique calligrapher Filocalus .

In the Roman calendar , February was originally the last month. For this reason, it was precisely this month that was appended with surplus leap days , a custom that has been preserved through the Julian and Gregorian calendar reforms.

February always begins on the same day of the week as June of the previous year because there is never a leap day (February 29) between the two months.

From a banking perspective, February has 30 interest days like every other billing month (according to the German interest calculation method ) , so that interest statements by February 30th make sense.

Under Emperor Commodus the month was renamed Invictus , but after the emperor's death it got its old name back. The old German name for February is Hornung , because this month the mature red deer shed the rods of its antlers and start pushing new antlers. Another theory assumes that Hornung means “the bastard conceived in the corner / secret”, since he falls short in the number of days. In Alsace , this month is still called that today. The old name of the month has also been preserved in Pennsylvania German as Hanning .

In the Rhineland and the Netherlands, the names Sporkel , Spörkel and Spürkel were used earlier for February . This expression is derived from the Latin term Spurcalia , which was used by the Church in the Middle Ages to describe the "immoral festivals" celebrated by the people during Carnival. The term fool's moon for February comes from the fact that the old early spring and fertility rituals were held at this time to drive away the demons of winter. Under the influence of Christianization , these boisterous celebrations as were Fastnacht (Fassenacht, carnival) or carnival on the day before Ash Wednesday is limited, so these fools time (mostly) ends in February.