The title of this article is ambiguous. Further meanings are listed under May (disambiguation) .

The May (from Middle High German meie : the month of May ', also, Spring') is the fifth month of the year in the Gregorian calendar . He has 31 days .

According to a number of Latin authors, this month is named after the Roman goddess Maia , to whom the Flemings Volcanalis made a sacrifice on the first day of this month. The creation of the equation of this - according to Gellius - venerated goddess “Maia Vulcani” (probably to be thought of as the “wife of Vulcanus”) with the goddess Bona Dea and Terra - according to Macrobius - or a Pleiad and the mother of Hermes / Mercurius is unclear; but the etymological assignment to the word root * mag (and thus to growth and multiplication) is considered certain. This means that the mensis Maius is part of the original Roman peasant year. Macrobius knows a god "Maius, qui est Iuppiter", who is only locally worshiped. During the reign of Emperor Nero , the month was renamed Claudius , one of the names of the emperor, which, however, did not prevail. Under Emperor Commodus , the month was then called Lucius , again one of his names, and this renaming was also reversed after the emperor's death.

In the pre-Julian Roman calendar, May was the third month, and in the Julian calendar the fifth, each with 31 days. 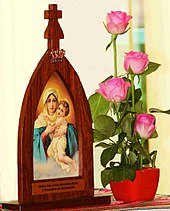 The month of May in the chronograph of 354 by the late antique calligrapher Filocalus . 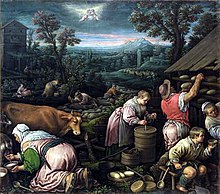 The first of May is the international public holiday (in Germany: public holiday) of the labor movement . The second Sunday in May is Mother's Day in German-speaking countries .

Charlemagne introduced the name Wonnemond in the 8th century (actually Old High German "wunnimanot" = pasture month), which indicates that the cattle could be brought back to pasture in this month. The old name of the month actually has nothing to do with “delight” in today's context. But this misunderstanding can already be found at the beginning of the modern era and New High German. According to the German dictionary of the Brothers Grimm sv WONNEMONAT, Basilius Faber declares in 1587 [sic!]: "Maius, der may, a frondibus Carolus Magnus the merry month, id est mensem amoenitatis olim nuncupavit" ("maius, der may, once named Karl after the leaves the great the merry month, ie the month of loveliness ”). May was also called the flower moon because of the main flowering time of most plants. According to old tradition , one can only be sure of the increasing warmth after the so-called ice saints from May 11th to May 15th. May has been celebrated in Europe with May celebrations, parades and rides since around the 13th century. In many areas of Germany and Austria, the setting up of imposing maypoles is an established custom; Festivals like Beltane or Walpurgis Night had existed for a long time .

Wikisource: May  sources and full texts

Commons : May  - album with pictures, videos and audio files