The title of this article is ambiguous. Further meanings are listed under September (disambiguation) . 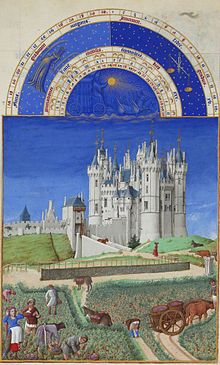 The month of September in the Duke of Berry's book of hours , the castle of Saumur

The September is the ninth month of the year in the Gregorian calendar and has 30 days .

The equinox is on September 22nd or 23rd : the sun is in the equatorial plane of the earth and on this day it rises precisely in the east and sets precisely in the west . On one of these two days, astronomically speaking, autumn begins .

In the Roman calendar , September was originally the seventh month ( lat . Septem = seven). 153 BC However, the beginning of the year was brought forward by two months, so that the relationship between name and month count was lost. This is sometimes overlooked when transferring previously used Latin dates (“ 9ber ” and “7ber”).

Renaming in the Roman Empire

In the Roman province of Asia Minor , September was the first month of the year because it was the birthday of Emperor Augustus ( A curious marginal note from world history: this local tradition was later adopted in the Byzantine Empire and was also valid in Russia until 1700 ; only then was the general rules for the beginning of the year ). When the Senate suggested that September should also be renamed in honor of the Emperor Tiberius (like July after Julius Caesar and August after Augustus), Tiberius declined, asking what happened to the thirteenth Caesar. When it was later suggested that the month of September should again be renamed Tiberius after him and the month of October after his mother Livia Drusilla in Livius , Tiberius refused again, this time not to have to accept equality with his mother.

In 37 Caligula renamed September Germanicus after his father . The emperor achieved that his full name Gaius Caesar Augustus Germanicus was reflected in the month sequence (Gaius) - Julius - Augustus - Germanicus . This feigned honor of the famous general did not last, because after Caligula's death September got its old name back. During the reign of Emperor Domitian , the month was renamed Germanicus again, which again did not prevail. When he took office of Antoninus Pius , the Senate this time suggested a name change to Antoninus ago, but the Emperor refused. Under Commodus , however, September was called Augustus and August was renamed Commodus in his honor . And finally wanted to 275 the Senate September in Tacitus rename (birth month of Emperor Tacitus ), which, however, like all the other renames not prevailed.

September begins on the same day of the week as December .

Holidays and events in September

In Liechtenstein, the birth of Mary on September 8th is a public holiday.

In Austria the only public holiday this month is the regional Rupertikirtag on September 24th. It is celebrated in memory of St. Rupert of Salzburg in the province of Salzburg. However, it is a public holiday according to state law , which only affects schools, as well as some offices and authorities.

In Germany there are no public holidays in September.

In Munich begins traditionally since 1872 , the Oktoberfest in the second half of September.