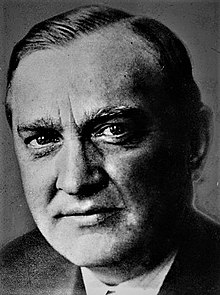 The Stefan Banach Monument in Krakow

Stefan Banach ( ˈstɛfan ˈbanax ? / I ; born March 30, 1892 in Krakow ; † August 31, 1945 in Lemberg ) was a Polish mathematician . He is considered the founder of modern functional analysis and one of the main representatives of the Lviv school of maths .

Banach's father was the tax or railroad employee Stefan Greczek, his mother after the baptism Katarzyna Banach, who was not married to Stefan Greczek. He grew up in a foster family in Kraków (with Franciszka Płowa and her daughter, Maria Puchalska) after initially being with his grandmother, who fell ill. He never got to know his mother (hardly anything is known about her, his father refused to provide Stefan Banach with information about it), while he maintained correspondence with his father. As a child he learned French fluently from an acquaintance from the foster family, and he also learned Latin as an autodidact. From 1902 to 1910 he attended the fourth grammar school in Cracow (Henryk Sienkiewicz grammar school). Even when he was still at school he was considered highly gifted in mathematics, but showed no interest in humanistic subjects, so that he was not one of the best students in his school and was only admitted to the Matura thanks to the intervention of his mathematics teacher. At school he was friends with his mathematically gifted classmate Witold Wilkosz. Despite their interests, both decided to study something other than mathematics because they felt that there was nothing new to discover in mathematics. Banach chose civil engineering. Since his father was of the opinion that he would not take his studies seriously enough, he withdrew his son's financial support. Banach first worked in a bookstore. Between 1911 and 1913 Banach was a student of mechanics at the Lemberg Polytechnic , where he completed his intermediate diploma. But he never finished his studies. In between he returned to Krakow frequently.

After the outbreak of the First World War , he worked as a road construction supervisor. Because of his short-sightedness, he was unfit for military service. After his return to Krakow he earned his living with tutoring and as an assistant teacher. He continued to study mathematics as an autodidact and at the university, where he probably heard lectures from Stanisław Zaremba . In 1916, the mathematician Hugo Steinhaus accidentally became aware of Stefan Banach when he heard a conversation with his friend Otto Nikodym in a park in Banach about the Lebesgue measure . They then met more often and their acquaintance resulted in a joint publication (only published in the Bulletin of the Cracow Academy in 1918 due to the war ) and long-term collaboration. After his first publication, Banach continuously submitted further mathematical papers. Through Steinhaus' efforts, Banach received from 1920 to 1922 an assistant position to Antoni Łomnicki at the Chair of Mathematics in the Department of Mechanics at the Lemberg Polytechnic. In 1922 he passed his doctoral examination at the Jan Kazimierz University in Lviv without having previously obtained degrees in mathematics. Because of his talent, an exception was made for him. The title of his doctoral thesis was "Sur les opérations dans les ensembles abstraits et leur application aux equations intégrales" (On operations in abstract sets and their application to integral equations ; Fundamenta Mathematicae 3 , 1922). With the fundamental theorems contained in this work, he created a new area of ​​mathematics, functional analysis . 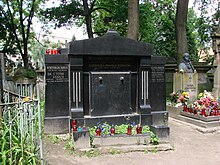 He completed his habilitation in 1922 at the University of Lemberg (decision of the department council of June 30th) with a thesis on measurement theory, and on July 22nd of the same year he became associate professor and in 1927 full professor (second chair for mathematics). In 1924/25 he was on a research stay in Paris. In Lviv he was considered an eccentric: instead of working in his office at the university, Banach usually sat in the local " Scottish Café " to fill his notebooks with ideas for functional analysis - hence his notes from this period are also called "Scottish notebooks ". In the 1930s, John von Neumann tried a total of three times to convince Banach to continue his scientific career in the USA. However, Banach always refused because he felt connected to Lviv and Poland and did not want to leave his family. In addition to Steinhaus, Stanislaw Ulam and Kazimierz Kuratowski were also in Lemberg , who taught there from 1927 to 1934 and worked a lot with Banach.

After the invasion of the Red Army in the same year he became a corresponding member of the Academy of Sciences of the Ukrainian Soviet Republic and stayed at the Lviv University as holder of the first chair for mathematical analysis and dean of the mathematics and physics faculty of this university (1939-1941). The well-known Soviet mathematicians Sergei Lwowitsch Sobolew and Pawel Sergejewitsch Alexandrow visited him in Lviv in 1940 and Banach, in turn, was in the Soviet Union several times. When German troops marched into his homeland, he was in Kiev and immediately returned to Lemberg.

Under the German occupation from 1941 onwards, he had to earn a living for himself and his family at times by donating blood to Rudolf Weigl's Institute for Bacteriology to feed lice , which were then used for typhus experiments. There was also a serious illness.

After the Red Army took Lviv again in 1944 , he became a mathematics professor again. He renewed his contacts with Soviet mathematicians and met Sobolev near Moscow. He planned to return to Krakow and teach there. On August 31, 1945 he died of lung cancer in Lemberg and was buried in the Riedl Monument in the Lychakiv Cemetery in Lemberg.

With Steinhaus he founded the journal Studia Mathematica in 1929 . He wrote textbooks for universities (for example on mechanics) and schools and, together with Steinhaus and other Polish mathematicians, published the series Mathematical Monographs from 1932 , the first volume of which was by Banach and dealt with the theory of linear operators in functional analysis.

In 1920 he married Łucja Braus. His son Stefan Banach became a well-known neurosurgeon. He was known to smoke 4-5 packs of cigarettes a day.

In 1930 he received the Lviv City Science Prize. From 1936 to 1939 he was Vice President of the Mathematical Committee of the Council for Exact and Applied Sciences. In 1936 he gave a plenary lecture at the International Congress of Mathematicians in Oslo ( "The theory of operations and their significance for analysis" ). In 1939 the Polish Academy of Sciences awarded him its grand prize.

Among other things, he dedicated his first work to the Fourier series . In the first work written together with Steinhaus, he dealt with the question of the convergence in the mean of the partial sums of a Fourier series and was able to answer it definitely in the negative. He also worked on orthogonal functions and series , the Maxwell equations , derivatives of measurable functions, and measure theory .

In his doctoral thesis and in the monograph “Théorie des opérations linéaires” (theory of linear operations) published in Warsaw in 1931 and in French in 1932, he axiomatically defined those spaces that were later named after him, the Banach spaces . Stefan Banach put the final basis for functional analysis and proved many fundamental propositions about the Hahn-Banach theorem , the Banach fixed-point theorem and the uniform boundedness principle . He introduced the relevant terminology used in functional analysis around the world today and gave the first lecture in the field.

In 1924, together with his Polish colleague Alfred Tarski , he formulated a sentence that became famous as the Banach-Tarski Paradox , an important contribution to set theory.

Banach wrote over sixty scientific papers and found numerous new theorems that turned out to be of fundamental importance to many areas of mathematics. Banach's working style, his extraordinary scientific intuition, his directness and openness allowed him to found the mathematical school of Lemberg together with Steinhaus.

Thanks to his experience as a tutor, Banach was an excellent lecturer and was also the author of many textbooks, including even textbooks for middle schools. He was known to be late in his lectures and to finish them before the scheduled time.