Birth of the Virgin , fresco by Domenico Ghirlandaio 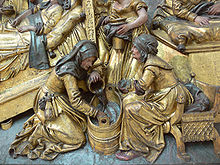 Sculpture of the Birth of Mary (detail), Augsburg around 1520

The feast of the Birth of Mary is celebrated on September 8th in the liturgical year of the Roman Catholic Church , the Orthodox Church and the Anglican Church . It commemorates the birth of Mary , mother of Jesus Christ .

The festival developed at the end of the 5th century from the consecration of today's St. Anne's Church in Jerusalem , a basilica that is built on the site that has long been considered the birthplace of Mary. In the 7th century, the feast of the birth of the Theotokos was celebrated in the Eastern and Western churches . The feast of the birth of Mary later determined the solemn feast of the Virgin and Mother of God, conceived without original sin, to be December 8th, nine months before September 8th.

Numerous churches and monasteries around the world are dedicated to the patronage of the birth of Our Lady (see also Church of the Birth of Mary ).

In the Tyrolean towns of Nassereith and Obsteig , a high mass is celebrated on the Sunday after the birth of Mary, followed by a procession . In Neuleiningen in Rhineland-Palatinate , on the Saturday after the birth of the Virgin Mary, there is a Marian celebration in the pilgrimage church of St. Nicholas followed by a procession of lights through the castle village, which is illuminated with candles. On the following Sunday the big day of pilgrimage is celebrated with many pilgrims; The high point is the pilgrimage service.

In Christian iconography , the birth of Mary is a frequent motif as an individual representation, but above all as part of cycles on the life of Mary , the life of St. Anna , the mother of Mary, or on the childhood and youth history of Jesus. Paintings and sculptures of the Birth of Mary often contain genre-like elements that can provide information about obstetrics and customs around birth and the puerperium at the time when the works of art were created. Well-known representations are the fresco Ghirlandaios in the Florentine church of Santa Maria Novella or the painting Birth of the Virgin by Pietro Lorenzetti in Siena.

The birth of Mary as a public holiday