Our Lady is a redirect to this article. Further meanings are listed under Our Lady (disambiguation) . 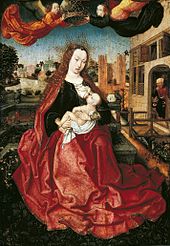 Master of Frankfurt : Madonna and Child

Theotókos at the Romanesque west portal of the Moosburg Kastulusmünster

The term Theotókos , which comes from profane Greek, is first recorded in Christian usage in Alexander of Alexandria around 322. The use of this title in the Sub tuum praesidium , the oldest Marian prayer in Christianity (found on a papyrus dating back to the 3rd century is dated), points to an even earlier usage and already to its importance for the Christian life of faith and prayer.

The Council of Ephesus in 431 confirmed the use of the term Theotokos against Nestorius , who taught that the divine and human nature in Jesus Christ are largely divided and unmixed. Mary should not be described as the Theotokos, but as the Theotokos.

Catholic dogmatics sees the term Mother of God as a more catchy synonym for the term Theotokos . Conversely, she considers the thesis “Mary gave birth to God but is not his mother”, which she discovered behind the above-mentioned sensation, to be a more recent formulation of precisely what the council once wanted to condemn. Nevertheless, Dei genetrix is by no means uncommon in the Latin texts , while mater Dei occurs mainly, albeit prominently, in the Ave Maria ; it is often a question of translation.

Our Lady is represented in the iconography of the image of Mary as Mary with the child , often referred to as the Madonna and Child .

The following main types of representation can be distinguished from the early Byzantine forms:

Since the 3rd century at the latest, with the emergence of the prayer We have been fleeing under your protection and umbrella, O holy Theotokos , there is also the Madonna of the Protective Cloak .

In heraldry , various representations of this heraldic figure have emerged as a common figure . A distinction can be made between a standing and a seated saint. A further distinction is made between the arm with which the baby Jesus is held. Whether the boy is held or carried on the right or left arm is only important for describing the coat of arms and should always be mentioned. A symbolic peculiarity is not hidden behind it, although this is sometimes claimed in interpretations. Both figures, mother and child, are depicted with a halo around their heads, Mary often with a mandorla . These attributes of saints are executed simply or radiantly in gold. Mary in the coat of arms can often be recognized by the occasional real white lilies . This flower represents virginity. The background of many coats of arms is enhanced by an altar. Mary and child are placed as human figures in silver or gold and with many details in the coat of arms. The hair color is not set to blonde (gold). Additions are crown , staff with lily or other religious insignia . In many cases, other heraldic figures are also placed in the heraldic field .

The feast of Our Lady is celebrated in the Roman Catholic Church on January 1st , the octave day of Christmas. Until the calendar reform of 1969 , she celebrated the feast of the motherhood of the Blessed Virgin Mary on October 11th. In the Greek Orthodox Church this festival is celebrated on Boxing Day ( December 26th ).