The title of this article is ambiguous. Further meanings are listed under Insignia (disambiguation) . 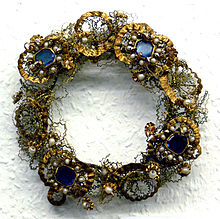 Crown (of the virgins) for the golden jubilee of profession , Lake Constance area, around 1760

A insignia (from latin insigne , characteristics, [military] badge, Award ' , more often in the plural insignia used; noun to adjective insignis , by a badge before other recognizable, recognizable, distinct, prominent, flashy' ) is a mark state,-sized or religious dignity, power and distinction. Signs of rule are also used, especially in political contexts . The insignia should make the status, service or office of the wearer visible to the outside world.

Well-known examples of insignia are: