This article deals with the pallium worn by Roman Catholic metropolitans; for other meanings see pallium (disambiguation) .

Innocent III. with pallium in the late antique-Byzantine style

The Archbishop of Mainz, Peter von Aspelt, with a pallium, as was customary since the High Middle Ages 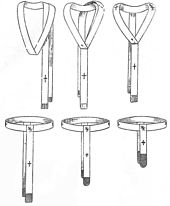 Development of the pallium

Benedict XVI. with the newly designed pallium of the Pope

The pallium is an official badge of the Pope , which he regularly awards to the metropolitans of the Latin Church . It is a ring-shaped band, about 5 to 15 cm wide, a kind of stole , and is worn over the chasuble . Usually six black silk crosses are embroidered in a pallium.

Until the 3rd century, the pallium was part of the clothing of high Roman officials. After Christianity was recognized as the state religion in 380, it was also bestowed on high clergymen ( patriarchs ). In the Eastern Churches it is called Omophorion and is part of the usual official costume of bishops. Awards of the pallium by the Pope to individual archbishops of the Western Church have been handed down since the 7th century . Pope Sergius I presented the Frisian missionary Willibrord with the pallium as a sign of his new dignity when he was consecrated on November 21, 695. Likewise, Pope Leo III. on April 20, 798 to Archbishop Arn von Salzburg as Metropolitan of the Bavarian Church Province the pallium. Since the middle of the 11th century, the pallium has been gaining increasing legal importance; it is now becoming an archbishop's insignia . From 1049, every archbishop should come to Rome for the award and take an oath of allegiance. But in the run-up to the investiture dispute , no German bishop followed the invitation to take a palliative oath until 1074.

The pallium is made from the wool of two lambs that the Pope had on the day of St. Agnes (January 21st) were blessed. Since their wool is no longer sufficient for all newly appointed metropolitans, other wool is added. The pallia are spun and woven by the nuns of the Santa Cecilia monastery in Trastevere . On the eve of the Solemnity of Peter and Paul , the new pallia are kept in a golden container in the Confessio of St. Peter's Basilica , the tomb of St. Peter under the main altar, making them a relic of touch . Their storage gives this place the name Pallienniche . The golden box in which the pallia are kept is often mistaken for the reliquary of St. Peter. Pieces of lead are sewn into the ends of the pallium for weighting purposes. Three of the embroidered crosses can be pierced with needles, which symbolize the three nails of the cross. In the past, these needles were used to fix the pallium on the chasuble .

The pallium was regarded as a sign of the participation of the metropolitan in the pastoral power of the Pope (in partem sollicitudinis) , to whom it was entitled as an insignia of his full power ( plenitudo potestatis ) per se. The pallies are given on the solemnity of the apostles Peter and Paul (June 29th) in Rome . The solemn handover is linked to an oath of loyalty by the Metropolitan to the Pope and his successors. The canonical law of the Latin Church states that “a metropolitan is obliged to request the pallium, in person or through a representative, of the Pope within three months of receiving episcopal ordination or, if he has already been ordained, after the canonical delegation It is a sign of the violence with which the metropolitan in communion with the Roman Church is endowed by the law in his own province. ”Today it is therefore a sign of the pastoral power of a metropolitan in communion with the Pope in Rome. However, he is only allowed to wear it in the churches of his ecclesiastical province . In the early and high Middle Ages , wearing the pallium was limited to a few days a year. In the course of the 11th century, the days on which the archbishop was allowed to use this insignia were increased by papal pallia privileges (so-called “pallia days”). The obligation to personally obtain the pallium from the Pope in Rome, as laid down in canon law, did not establish itself until the late 11th and 12th centuries, although isolated older regulations have been preserved in this regard. Later this duty was dispensed with more and more frequently until it assumed its present form in the Codex Iuris Canonici .

The Pope can use the pallium wherever he presides over a Holy Mass . According to the Corpus Iuris Canonici of the Latin Church, it was not allowed to wear a pallium in the presence of the Pope. Since this regulation is no longer in force, it came into practice that the metropolitan, in whose ecclesiastical province the Pope is staying, also put on his pallium.

The pallium is not transferable and is therefore buried with the deceased archbishop. If a metropolitan changes to another metropolitan seat, he needs a new pallium. At the funeral, the pallium that he received first is folded up and deposited under his neck, while the one he received last is put on him in the usual way.

In January 2015 the Vatican announced that in future the pallium in Rome will only be presented to metropolitans after the blessing by the Pope on Solemnity Peter and Paul and will later be laid out in a separate festival service in the respective archdiocese by the apostolic nuncio . The Holy Mass for the delivery of the pallium in St. Peter's Basilica on June 29, 2014 was the last occasion with the exception of visits by the Pope, to which several bishops wore a pallium at the same time.

In the course of the liturgical reform of the Second Vatican Council , efforts were made to renew the form of the pallium, which had withered over time. Pope John Paul II briefly (1999/2000) wore a pallium of the long type, as shown in the above illustration for Archbishop Peter Aspelt of Mainz. For reasons of its weight and, especially for an age-bent wearer, unfavorable cut, it was not retained. The situation changed when Pope Benedict XVI took office. In the first years of his pontificate he wore a pallium with five red crosses of the original type and method of carrying - not, as was usual in the last centuries, shortened and narrowed in a Y-shape on the chest and back, but as in late antiquity and the early Middle Ages hanging the ends of the V-shaped collar over the left shoulder (cf. the illustration of Innocent III and the first image of Benedict XVI on the right). This was interpreted as a step towards the separate churches of Orthodoxy , which know the Omophorion in a similar form. A corresponding change in the pallium of the metropolitan was under discussion.

Since the Solemnity of Peter and Paul in 2008, Pope Benedict XVI. a new pallium that was not designed according to the shape of its predecessor or the pallia of the archbishops. It looks similar to the flat pallium from the time of the Tridentine Reform (16th / 17th century). This step took place for reasons of clearly visible continuity as well as because of the inconvenient way of wearing the "intermediate form", according to the papal master of ceremonies Guido Marini in an interview. The pallium of the Pope has been since Benedict XVI. larger and wider than that of the archbishops and embroidered with six red instead of black crosses. In the meantime, the Pope mosaic of Benedict XVI. changed accordingly in Sankt Paul Outside the Walls .

According to the Vatican spokesman Federico Lombardi, the pallium that Pope Francis was put on at the inauguration on March 19, 2013 by Cardinal Protodeacon Jean-Louis Tauran was the same pallium that Benedict XVI had. had worn. This pallium is a round woven Roman pallium with six red crosses on the approx. 9 cm wide white sheep's wool and is intended to remind of the good shepherd who carries the lost lamb on his shoulders. Since the Solemnity of the Apostles Peter and Paul in 2014, Francis has again been wearing a metropolitan pallium with six black crosses.