Holy Willibrord. Illumination from the environment of the master of the Registrum Gregorii (partly also attributed to the master), Trier around 1000 (Paris, Bibliothèque Nationale, Lat. 10510)

Willibrord missionaries in Friesland - from Arend History of the Netherlands, Volume 1 (1840) 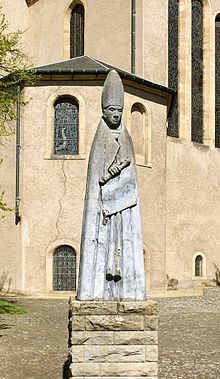 Statue of St. Willibrord in Echternach.

Willibrord statue (wood) in the basilica in Echternach

Monument to Willibrord in Trier

Saint Willibrord ( Villibrordus ) (* around 658 in Northumbria , later England ; † November 7, 739 in Echternach ) was an Anglo-Saxon missionary who founded the Echternach monastery . He is often referred to as the " Apostle of the Frisians ".

On November 7, 2015, the Archbishop of Luxembourg , Jean-Claude Hollerich , appointed Willibrord, in addition to St. Tarzisius, the patron saint of the altar servers of Luxembourg .

Together with eleven companions - including Suitbert - he moved to Friesland in 690 . Politically supported by the Frankish caretaker Pippin the Middle , Willibrord was initially able to proselytize in the Franconian- ruled Fresia citerior (corresponds to this side of Friesland up to the Lek and some areas south of it). The starting point for the mission was presumably Antwerp with the Peter and Paul Church built by the Aquitaine mission bishop Amandus .

In the second half of the 7th century, the lower course of the Meuse probably formed the Franconian-Frisian border. The conquests of Pippin in 690 did not lead to a (re-) possession of Utrecht . This was only made possible by a second Frisian campaign by the Carolingian forefather in 695, which was perhaps caused by tensions between groups of the Frisian nobility ( Wursing ) and Radbod , who were friendly to the Franks , and culminated in the battle of Dorestad . From then on, Friesland was perhaps Franconian up to the Vliestrom (between Vlieland and Terschelling ), as evidenced not least by the work of Willibrord's helper Adalbert in Egmond and the old border function of the Vlie. In the period that followed, there was at least partial agreement between Pippin and Radbod, which made it possible for Christian-Frisian emigrants to return.

The special significance of his mission lies in the fact that he broke with the Iro-Scottish ideal of the ascetic homelessness of the wandering monks . This Peregrinations The saint: was ideal among English missionaries in Sweden for a long time effectively Eskil († 1080) still believed the sky all the more to get closer, the farther he walked away from the home. With Willibrord, this old mission ideal was replaced by cooperation with the Franconian housekeeper and the papacy, the integration of the missionary into the imperial association and the integration into the papal missionary power by acquiring the archbishop's title. Another sign of this involvement is that Pippin sent him to Rome with the support of all (favente omnium consensu) .

In November 695 the missionary stayed in Rome for the second time (after 692) and was ordained there at Pippin's request by Pope Sergius I (687–701) as traveling archbishop to the Frisian people (Latin: in gentem Frisonem ) - according to the Roman universal missionary approach to converting the entire Frisian people. By changing his name to "Clemens" he entered the Familiaritas of the Roman See. The (metropolitan) bishopric of the Frisian ecclesiastical province, which was founded in this way and is subordinate to the Roman Church, was perhaps already and certainly determined as Utrecht in agreement with Pippin . In any case, shortly after 695/696 Willibrord was assigned the location as the center of the new Frisian church organization. He transferred the doctrine developed in England that an archbishop must receive the pallium in order to be able to fulfill his function, as a sign of participation in the power of the Pope , to the continent and thus introduced a new section of papal powers. In England this view had been established since Gregory the Great . The archbishop was entitled to found new dioceses, and he was the link between the diocesan bishops and the Pope. This view prevailed on the continent with the incoming missionaries from England, including Boniface .

From here the ecclesiastical structures and Christianity continued to develop under the protection of Frankish rule (settlement of Franks (homines Franci) ) and with the inclusion of the social elites, while the pagan Friesland of the small king Radbod continued to exist outside the sphere of influence of the Hausmeiers . Willibrord went to him around 700 and was welcomed there, but the missionary efforts were initially unsuccessful.

Willibrord's mission was abruptly interrupted by Pippin's death in 714. At that time, Radbod managed to take advantage of the turmoil within Franconia to recapture large parts of the Franconian-ruled Friesland. It was only when Karl Martell (714-741) was able to assert himself as caretaker and princeps - against the resistance of Plectruds - that the former Franconian Friesland succeeded in the campaign of 722, the 733 and 734 further Frisian campaigns and the expansion of Franconian rule up to and including zur Lauwers followed. The opportunities for missionary work were there again, mission and Christianization could be resumed after the years of interruption by Willibrord (who also worked with Bonifatius for a short time in 716 , although the two did not really get along), even if not in Denmark. There it was only accepted again under Ludwig the Pious , as Charlemagne refused to proselytize areas that were not subject to it.

In 690 he also brought the cult of St. Oswald with him to Friesland, which spread from there.

Willibrord altarpiece in the basilica in Echternach

Sarcophagus for Willibrord in the basilica dedicated to him in Echternach

Willibrord spring in the crypt of the basilica in Echternach

Willibrord spent more and more time in his Echternach monastery , which he had founded in 697/698 on the basis of a donation from Irmina von Oeren and to which he assigned extensive property - in Friesland, Thuringia and elsewhere - and where he also on the night of the 6th to Died November 7, 739. According to his will from 726, the missionary was buried in the choir of his monastery church and was soon venerated as a saint in Echternach.

Every year on the Tuesday after Whitsun, the Echternach jumping procession takes place in Echternach . In this religious procession, the participants "jump" to polka melodies in rows through the streets of the city to the grave of St. Willibrord in the Echternach basilica. This procession was added to the list of the Intangible Cultural Heritage of Humanity by UNESCO in 2010.

The November 7 is Willibrord Memorial for the following churches:

The Willibrordi Cathedral in Wesel, which was formerly part of the Echternach Monastery, and other Willibrord churches in the German-speaking countries were named after him. The St. Willibrord high school in Bitburg in the southern Eifel also bears his name. A plaque about him is in the Walhalla in Donaustauf .

In Utrecht , where Willibrord was ordained bishop at the end of the 7th century, the Sankt Willibrord Church bears his name.