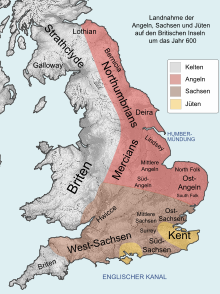 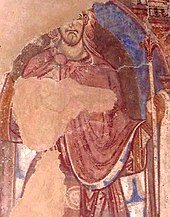 Oswald was a son of King Æthelfrith of Northumbria and came from his second marriage to Acha, the daughter of the former king Ælle of Deira . Acha was a cousin of his predecessor Osric (633-634), the king of Deira. Eanfrith , his predecessor in Bernicia , was his half-brother. His son Æthelwald , who was sub-king in Deira around 651 to 655, probably comes from the marriage to an Irish woman. Around 635 he married Cyneburg, the daughter of King Cynegils of Wessex.

Youth and Exile in Scotland

Oswald's father Æthelfrith was originally king of Bernicia and united both kingdoms to form the new kingdom of Northumbria with the conquest of Deira around 604 . Æthelfrith confirmed his rule by marrying Acha from the royal house of Deira, who became Oswald's mother.

Around 616, however, the heir to the throne of Deira, Edwin , whom Æthelfrith had driven into exile, succeeded in conquering Northumbria with the help of King Rædwald of East Anglia through the battle of the River Idle, in which Æthelfrith was killed. Now Edwin, in turn, sent the sons of Æthelfrith into exile as rivals to the throne. Oswald, Oswiu , Æbbe and possibly other siblings went to King Eochaid Bude (608–629) in the Irish-Scottish Empire of Dalriada . His half-brother Eanfrith moved to the Picts with other siblings . Oswald was raised by the monks of the Iona monastery and baptized Christian. During their exile, Oswald and probably his brothers took part in Dalriada's campaigns in Ireland. His son Æthelwald , who was sub-king in Deira around 651 to 655, probably comes from the marriage to an Irish woman.

In 633 the kings Cadwallon ap Cadfan of Gwynedd and Penda of Mercia allied and rebelled against King Edwin of Northumbria. Together they destroyed the Northumbrian army on October 12, 633 at the Battle of Hatfield Chase near Doncaster . Edwin fell in battle; likewise his son Osfrith. His son Eadfrith had to surrender and was later murdered by Penda. The immediate result of the defeat was the renewed division of Northumbria: while Osric was able to hold out in southern Deira, northern Bernicia fell to Eanfrith , Oswald's half-brother who had returned from exile, and thus to the old dynasty there.

According to Beda Venerabilis , Osric and Eanfrith are said to have been baptized Christians who rejoined the Anglo-Saxon religion after ascending to the throne . Osric continued the fight against Cadwallon, which he included and besieged in 634, presumably in York . When a failure Cadwallons Osric and his army fell was wiped out. Cadwallon plundered Northumbria and murdered Eanfrith, who was ready to make peace.

In 634 Oswald returned from exile and defeated Cadwallon in the Battle of Heavenfield near Hexham . The victory was viewed as a divine judgment by the outnumbered Christian army of Oswald. Cadwallon was killed in the battle. It was probably this victory that led to his recognition as a Bretwalda , at least in the north of England . He may have been assisted in taking power by Domnall Brecc , king of Dalriada, and Gartnait mac Uuid, ruler of the Picts. Oswald also secured the throne of Deira and drove his heir Oswine of Deira by Wessex into exile. The two kingdoms Bernicia and Deira - he came from both royal families - were reunited to form Northumbria.

Northumbria in turn was considered to be the supreme power of the entire island. In the entry of the year 827 (829) of the A-manuscript of the Anglo-Saxon Chronicle , which in turn is based on information in Beda's Historia ecclesiastica gentis Anglorum , he is referred to as the sixth Bretwalda and is said to have ruled over all British, Picts , Scots and Anglo-Saxons. Oswald's power, however, has been exaggerated in the sources. How far his influence actually extended is uncertain; there is no evidence that Oswald dominated northern Wales and the Pict areas. However, his sphere of influence certainly included the kingdoms of Lindsey , Sussex and Wessex . With Penda, however, there was another important king in Mercia . Oswald used his suzerainty and formed alliances to counteract this growing danger. Oswald was involved in founding the first diocese in Wessex. In 635, Oswald was godfather when King Cynegils (611 – around 642) from Wessex was baptized by Bishop Birinus in Dorchester-on-Thames . He finally consolidated his alliance with Wessex by marrying Cyneburg, the daughter of King Cynegils. In 637 Oswald probably supported the Pict king Domnall Brecc, who had hosted him during his exile, with some troops in the battle of Mag Ráth . Domnall suffered heavy losses in the battle and Oswald was able to gain supremacy over Dalriada. Oswald was also dominant in the relationship between Northumbria and the Kingdom of Kent . Its king Eadbald (616 / 618–640) had taken in his sister Æthelburg, the widow of Oswald's uncle and predecessor Edwin. Fearing an attack on the lives of her sons and potential heirs to the throne by her nephew Oswald, she sent them to her relative Dagobert I in the Franconian Empire .

In Northumbria, Oswald vigorously ensured the restoration of Christianity. He had the construction of the stone Church of St Peter begun by Edwin , a predecessor of today's York Minster , which was destroyed several times , completed. Paulinus , the Roman Catholic Bishop of York , had fled to Kent under his predecessor. To re-Christianize, Oswald turned to the abbot Segene / Segenius of the Iona -Scottish monastery . First Cormán was sent as a missionary, but he soon gave up his missionary work without any results and returned to Iona. Aidan reprimanded his methods and was appointed bishop himself in 635. Oswald assigned him the island of Lindisfarne near the royal castle Bamburgh as a bishopric. On the island, Aidan and 12 Scottish monks founded the Lindisfarne monastery as a center of missionary activity in the same year and began the Christianization of Northumbria. Aidan initially preached in Scottish Gaelic and King Oswald translated for his Anglic court. Oswald also supported the founding of other monasteries by donating land.

Penda of Mercia, who was allied with the British Kingdom of Powys , remained a threat. In 642 Oswald dared to attack. The battle of maserfield (probably at Oswestry , near the Welsh border) on August 5, Penda could decide for themselves. Oswald, around 38 years old, was killed. Oswald's body was dismembered and displayed. The immediate consequence of the defeat was the renewed division of Northumbria: Oswald's brother Oswiu succeeded the throne in northern Bernicia , while in southern Deira the old dynasty there came to the throne again with Oswine , a son of Oswald's predecessor Osric . 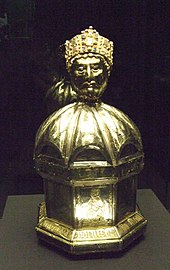 Since he died fighting the last pagan empire of the Anglo-Saxons, he was considered a martyr and was venerated as a saint. Immediately after his death, miracles were reported at the place where he died. The center of the Oswald cult was Bardney Monastery in Lindsey , but it soon spread to Ireland and continental Europe, especially Flanders, Germany and Austria. Numerous churches in England and on the continent were consecrated to Oswald.

Oswald is the patron saint of the city and canton of Zug , the English kings, the crusaders, reapers and cattle. He is called to protect against the plague. In some regions he is one of the fourteen emergency helpers . Its feast day is August 5th in the Catholic and Anglican Churches. In Evesham and Gloucester the translatio will be commemorated on October 8th.

His brother Oswiu and his daughter Osthryth recovered the remains and buried the torso in Bardney Monastery in Lindsey . In 909 some relics from Bardney are said to have been transferred to St. Peter's in Gloucester by Æthelred , the Ealdorman of Mercia, and his wife Æthelflæd .

The head was taken to Lindisfarne Monastery . He was brought to safety in the coffin of St. Cuthbert in Chester-le-Street by Bishop Eardulf of Lindisfarne in 875 after a long odyssey from Danish Vikings . This is why this is sometimes portrayed with Oswald's head. Bishop Aldhun Durham convicted 995 Cuthbert's bones, and Oswald's head from Chester to Durham and initiated 998 a stone church as the resting place of St Cuthbert. In 1104 Cuthbert's grave was reopened and his body was reburied in the newly built Durham Cathedral . When the grave was reopened in 1826/1827, Oswald's skull is said to have been in it.

Partial relics of the head can be found in Echternach , Hildesheim and in Paderborn Cathedral . In the Rhineland-Palatinate Boßweiler , Diocese of Speyer , there is a pilgrimage documented as early as the Middle Ages, with a pilgrimage church and skull relic (part) of St. Oswald.

One arm first made it to the capital Bamburgh , but was later transferred to Ely . The other arm is said to be in Gloucester or Durham .

The saint is represented with the regalia and insignia of a king, above him a dove, a sun on his chest, with ravens or a golden stag.

In 634, Oswald is said to have erected a cross before the Battle of Heavenfield , the shavings of which were strewn in water and said to have healing properties. In Beda's time the monks of nearby Hexham Abbey had built a church there and made a pilgrimage to the site on August 4th each year. Healing properties were also ascribed to the soil on which he died. So many sick people took a little bit of earth with them until a man-deep hole was formed over time. According to legend, his severed arms were imperishable.

In western Styria there is a regular meeting of the chapels from those places that are named after St. Oswald (Oswalder meeting) .