Dorchester-on-Thames [ ˈdɔːtʃɪstə ] is a small town and civil parish ( civil parish ) in the county of Oxfordshire in England.

Dorchester dates back to a Neolithic settlement . The Romans also settled here and called the settlement Dorcic . In 635, Bishop Birinus established a mission in Dorchester after converting the King of Wessex , Cynegils , to Christianity. At that time the place was the center of the Kingdom of Wessex. Dorchester was later replaced by Winchester as capital and conquered by Offa , King of Mercien .

In the 9th century the place became the seat of the Bishop of Dorchester after the Bishop of Leicester had to flee from the Vikings . Large parts of the kingdoms of Wessex and Mercia belonged to the diocese . In 1072 the bishopric was moved from Dorchester to Lincoln . 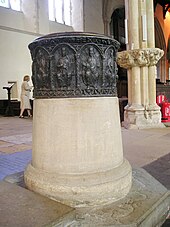 The spacious church was a Saxon, then a Norman episcopal church from 635 to 1072 and an Augustinian abbey church founded by Bishop Alexander von Lincoln from 1140 , where crowds of pilgrims venerated the shrine of St. Birinus . The monastery was dissolved by Henry VIII in 1536 and the Birinus shrine was destroyed. Richard Beauforest of Dorchester bought the monastery buildings and the church in 1554; the sacred building has served as the Anglican parish church since then . A Norman baptismal font made of lead , which shows eleven apostles in relief , is particularly worth mentioning. The church tower was built in 1602.

The World Poohsticks Championship has been taking place in Dorchester since 1983 , a game that Pooh the Bear and his friends play in the book by Alan Alexander Milne : The players throw sticks into the river while standing on a bridge. The winner is the one whose stick appears first on the other side of the bridge.

The city is the birthplace of Mark Wright (* 1963), a soccer coach and former soccer player.