Font is a redirect to this article. Further meanings are listed under baptismal font (disambiguation) .

Since baptism is the rite of acceptance into the church, the baptismal font can often be located near the portal of a church , in a baptistery or in a separate building, the baptistery . 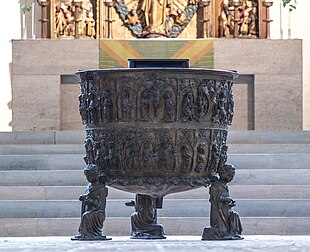 Bronze baptismal font in the Marienkirche in Lübeck

In the early centuries of the Church, baptism was mostly done by immersion in "living water". According to Beckmann, baptisms by pouring over were the exception. Since the 4th century, baptism by pouring over the person to be baptized was predominant, as is shown by representations from late antiquity and the early Middle Ages. In some regions of the early Church , the person to be baptized continued to be baptized by immersion. Most of the surviving baptismal fonts from the first millennium around the Mediterranean are too small for that. It is not possible for adult baptized persons to go into hiding. Since in the beginning both baptismal liturgy and the execution of baptism were mainly aimed at adolescents and adults, basins set into the ground, called piscina (from Latin: piscina = water container), were used.

The oldest baptismal piscina is known from the Syrian house church of Dura Europos from the 3rd century. The baptismal font of the Lateran Baptistery in Rome from the 4th century is still present under the current structure. A 4th century christening piscina sunk into the ground was excavated in the cathedral group of Geneva . Studies show that it - like numerous other early Christian baptismal fonts - was made smaller, which suggests that immersion baptism was replaced by baptism by pouring over it. The time at which this happened will have to be judged after the excavations under the Geneva Cathedral have been completed. The function of the 64 m² basin between the basilica buildings at the location where Trier Cathedral was later built is controversial. Maybe this is a representative tank. One of the almost 1000 known early Christian baptismal fonts around the Mediterranean can be viewed within the preserved foundation walls of the baptistery in Portbail in Normandy ; it may date from pre-Merovingian times. Like the oldest piscina in the well-known baptistery of Poitiers , this cannot be dated precisely because of the known archaeological finds. Most of the early Christian baptismal fonts recorded by excavations in France and Germany belong to the middle Merovingian period , i.e. the 6th / 7th. Century.

With the increasing spread of Christianity , more and more children were baptized, which is why baptismal fonts - much later also called cuppa or baptismal font - in the east since 6/7. Century and in the west since the Carolingian era .

The earliest free-standing baptismal fonts are monoliths standing on the floor , often ornately decorated with reliefs , ornaments or figurines . Baptismal fonts were also made of bronze , e.g. B. Medieval bronze feet of the Low German cultural area . Further names for these first baptismal fonts are baptismal tubs ( vat = bucket) and baptismal tub . Both terms clearly illustrate the barrel-like appearance. In the further development these first basins were placed on supports. These supports could be designed as animals, demons or hybrid beings, and served to ward off evil. During the transition from the Romanesque to the Gothic, the basins became steadily narrower and higher, so that a goblet shape gradually emerged. The baptismal fonts usually consisted of a foot, a shaft and a more or less voluminous basin. The demon-repellent figures of the Romanesque were transformed at the same time into depictions of angels and symbols of the evangelists or disappeared completely. The base and shaft of the substructure became even narrower until they developed into columnar supports for a baptismal bowl that only held a small amount of water in the Renaissance and Baroque periods.

Often pools today are round or octagonal z. B. alluding to the seven days of creation and the "new creation" or to the circumcision of Jesus , which according to Jewish custom took place on the eighth day after his birth. In the Middle Ages, a design that is based on the description of the "brazen sea" in the Temple of Solomon ( 1 Kings 7: 23-27  EU ) is also common. Some modern triangular basins symbolize the Trinity of Father, Son, and Holy Spirit.

In the celebration of Easter Vigil , the baptismal water is consecrated according to Western tradition. The font was therefore completely filled with water that was only renewed once a year; To protect against contamination and evaporation, most fonts had a metal or wooden lid. Since the liturgical reform of the 2nd Vatican Council, the baptismal water has only been kept in Catholic churches for the Easter period, otherwise it has been specially consecrated for each baptism celebration.

The baptismal harvest, a combination of baptismal font and lectern , is located in the Schmannewitz church . The Gothic baptismal font in La Baussaine combines a container for water with that for baptism.

The capacities were usually 150 to 180 liters , in individual cases even up to 420 liters. Measurements by the Bremen calibration office in 2000 of a total of 51 bronze baptismal fonts from Romanesque and early Gothic churches from the 13th and 14th centuries showed that they usually embodied a certain volume as standard . The volumes shown were, for example, 1  ohm , 1  Oxhoft , 1  Malter or 2  bushels .

The traditional baptismal fonts or fonts from the Middle Ages continued to be used, but they were now empty and were filled with water on the occasion of a baptism. The baptismal jug "which is a special Lutheran device" was used for this purpose.

The Orthodox churches still know the baptism of children by immersion to this day. (Relatively large) baptismal fonts made of metal are widespread. At the edge of these basins there is a holder for three candles, which are put on at the baptism ceremony as a symbol of the Trinity.

The reformation of the Baptist movement coming Mennoniten practice, depending on the community submerging or sprinkling or pouring over a smaller font.

Baptists practice baptism by immersion and are free to perform it in bodies of water or in the facilities of a swimming pool or the like, depending on local conditions.

In historical Baptist churches of the 19th century in Germany, a typical arrangement looks like this: “There is a very high pulpit in the middle, and the baptismal font is located in a kind of crypt right below it.” This is consistent as the immersion in the Water is interpreted theologically as dying and resurrecting with Christ. In newer Baptist churches, the baptismal font is usually asymmetrically located in a corner of the room: for practical reasons, to shorten the way for the person to be baptized to a changing room. The free church architect Ulrich Arndt advocates placing the place of baptism at the center of new churches; he sees the Baptist baptismal architecture ideally realized in the baptismal church St. Petri Pauli in Eisleben.