This article is about the French city. For further meanings, see Poitiers (disambiguation) .

Poitiers [ pwat'je ] is the capital of the Vienne department in western France . By 2016, she was also the capital of the then defunct region Poitou-Charentes . It is located on the Clain River and has 88,291 inhabitants (as of January 1, 2017).

Because of their 78 under monument protection standing cultural monuments she was awarded the predicate city of art and history excellent.

The town is Celtic in origin, The tribe of pictones founded the Oppidum Lemonum strategically located on a mountain spur between the coincident here rivers Clain and Boivre . Under Roman rule Poitiers was called Pictavium . The city received a Roman urban system with an axilla still visible today, consisting of the Decumanus Maximus (today Grande Rue) and the Cardo (today Rue Arsène Orillard). A Christian community has been attested in Poitiers since the 2nd century, which gained supraregional importance at the latest with the election of Bishop Hilarius (315–368). From 418 at the earliest, Poitiers assumed important political and economic tasks in the Tolosan Empire of the Visigoths .

Not far from the city, these 507 were defeated by the Franks in the Battle of Vouillé . The Franconian Merovingians and Carolingians initiated the construction of numerous churches within the Gallo-Roman walling, as well as on the Old Market and on the banks of the Boivre. In 558, Radegundis of Thuringia, with the support of Chlothar, founded the Sainte-Marie-hors-les-Murs monastery near the city . In the battle of Tours and Poitiers (732) the Franconian ruler Karl Martell stopped the further advance of the Moors into Central Europe . In the 8th century Poitiers became the center of the County of Poitou. With the transfer of the ducal title of Aquitaine to the Counts of Poitou at the end of the 10th century, Poitiers rose to become the capital of the entire southwestern French region between the Loire and the Pyrenees . Poitiers flourished under the rule of Eleanor of Aquitaine , but the conflict with England began when she married Henry II Plantagenet .

In 1356 the French King John the Good was captured in Poitiers after the Battle of Maupertuis between England and France. In 1369 the city was retaken from France. Because Paris was under English occupation at this time, the government of Charles VII was transferred to Poitiers from 1423 to 1436. Here the monarch founded the University of Poitiers in 1431 on the orders of the Pope . From 1527 onwards, several Protestant communities emerged in the Poitou, many of them sought refuge in the city of La Rochelle, which had been converted into a Huguenot fortress . The Edict of Poitiers , which was issued on September 17, 1577, following the Peace of Bergerac , ended the sixth Huguenot War with extensive concessions to the Protestants and essentially confirmed the provisions of the Peace of Saint-Germain of 1570. At that time Poitiers had largely lost its former economic and political importance. However, the city remained the seat of the Archdiocese of Poitiers .

As a result, the city's population grew only slowly and was also declining at times. In the middle of the 16th century Poitiers had around 15,000 inhabitants. The number grew to 25,000 within a century, but then fell to between 17,500 and 18,140 by the second half of the 18th century. In the year of the French Revolution , Poitiers had 21,000 inhabitants, at the beginning of the 19th century this number had fallen to 16,000. The city's industrialization largely failed to materialize in the 19th century. With the appointment of Poitiers as the capital of the Vienne department and the establishment of a garrison under Napoléon Bonaparte , the city was to be given economic impetus, since the university, with a few hundred students, had sunk into insignificance. This policy began to bear fruit in the middle of the 19th century. In 1881 almost 10% of the city's population were members of the military, and there were also new immigrants from the agricultural surrounding area. Around 1900 41% of the workforce worked in small craft and commercial enterprises. Nevertheless, the settlement area grew only slightly. In 1931 around 40,000 people lived in the city.

Description : In silver, a red lion surrounded by a black border with nine golden balls reaching up to the blue head of the shield with three bar-white golden lilies .

Poitiers has prehistoric and ancient cultural monuments such as the Pierre Levée dolmen on the later Roman road to Avaricum (Bourges) or Lugdunum (Lyon) and the remains of one of the largest Roman arenas (early 1st century, originally 150 × 130 m). A dedicatory inscription for the Gallic god Adsmerius was also found here.

From the 12./13. The remains of the former fortifications , known as the "Wall of Eleanor of Aquitaine ", date from the 19th century . Parts of the city ​​wall and the towers built in the Boivre valley have been preserved . The latter currently host facilities of the postal authority.

Another tourist attraction is seven kilometers north of Poitiers which at the time of the Paris industry Cité des Sciences et de l' inspired Futuroscope . 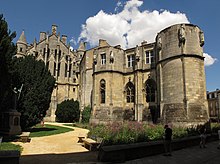 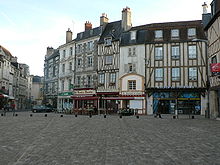 The former residence of the Counts of Poitiers has preserved its donjon called “Tour Maubergeon”, established at the end of the Middle Ages . Today it houses the Palace of Justice.

Also preserved the towers remained of the castle of Jean I. de Berry , the castle Clain at the confluence of the Clain and the Boivre.

In the old town, especially in the area of ​​the Rue de la Chaîne, the Place du marché Notre-Dame, the Rue de la Regratterie and the Rue des Vieilles Boucheries, there are numerous beautiful half-timbered houses .

Among the so-called "Hôtels Particuliers", i.e. the former city palaces of the upper middle class, the Hôtel Fumé and the Hôtel Berthelot on Rue de la Chaîne, where the university's history and humanities faculty is currently located, as well as the Hotel du Puyarreau.

Also worth seeing are the Hôtel de Ville de Poitiers , the town hall, the statue “Notre-Dame des Dunes” and the copy of the Statue of Liberty , which was erected in memory of General Jean-Baptiste Berton at the former location of the pillory where the general was was guillotined in 1822 .

The early Christian baptistery of St. Jean (in the core 6th century with possibly older predecessors), one of the oldest preserved sacred buildings in France, the Romanesque churches of St. Hilaire-le-Grand and Sainte-Radegonde, which are the presence of outstanding personalities, are of art historical importance in Poitiers, thanks to the holy Doctor of the Church Hilarius of Poitiers and Saint Radegundis , the wife of Chlothar I , as well as the Church of Notre-Dame la Grande .

The Poitiers-Biard Airport is located west of Poitiers.

In the west of the city, west of the airport, the Autoroute A10 ( L'Aquitaine ) runs, which is part of the European route 5 in this area . There are two access points (29: Poitiers-Nord and 30: Poitiers-Sud).

The Poitiers train station, built in 1851, is on the Paris – Bordeaux line .

The ITF Poitiers, a tennis tournament of the ITF Women's Circuit , takes place in Poitiers.

The University of Poitiers was founded in 1431 by Charles VII. Poitiers has the second oldest university in France. Thinkers like François Rabelais , René Descartes and Francis Bacon attended the university. Today Poitiers is one of the largest student cities in France - the city has more students per inhabitant than any other French university city.

The universities of Poitiers are:

Municipalities in the Arrondissement of Poitiers