Radegundis is a redirect to this article. For other people with this name, see Radegundis (name) . 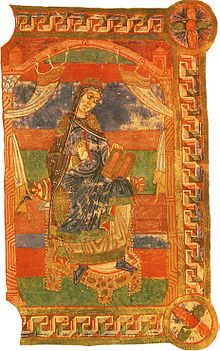 Radegunde ( Radegund , Radegundis , French Radegonde ; * around 520; † 13 August 587 in Poitiers ) was the wife of the Frankish King Chlothar I and daughter of King Berthachar of Thuringia .

Radegunde is venerated as a saint in the Roman Catholic Church . She is the patron saint of weavers and potters and the city of Poitiers . Her Catholic and Protestant feast day is August 13th .

Your mother is not known. Since Radegunde must have been an orphan before 531, she was brought up with at least two brothers at the court of Thuringian King Herminafried , her uncle. Everything else, whether Herminafried had her parents killed or something similar, is speculation and not proven by any source. She must have received a very good education at the royal court.

Radegunde in the Franconian Empire

In 531, after the battle of the Unstrut , which the Thuringians lost to the Frankish king Chlothar I , Radegunde and her brother were deported to Neustria to the royal villa Athies near Péronne on the Somme . Here Radegunde was brought up in a Christian way, learned the Latin language , read the writings of the church fathers and poets and took care of the care, nutrition and instruction of poor children.

Queen of the Franks

Around 540, King Chlothar forced her to marry Radegunde against her will. He had previously personally killed two of the three underage sons of his brother Chlodomer who were left behind ; also he had already had four wives. Radegunde fled but was seized and brought back.

The wedding took place in Vitry (Artois), the marriage remained childless. However, the couple adopted and raised a girl named Agnes .

As queen, Radegunde lived very ascetically at the court in Soissons , according to her vitae . She gave gifts to the church; at the table she let the meat bowls pass and filled herself with beans or lentils. The courtiers mocked that the king had married a nun . She also asked the king to pardon those sentenced to death and devoted herself to nursing the sick.

Around 550, Chlothar probably had Radegundes brother murdered in retaliation for an uprising by the Saxons and Thuringians. This hit Radegunde so deep that she finally parted with Chlothar. There is no evidence of divorce .

Life as a benefactress and a nun

They fled to Noyon , where Bishop Medardus of Noyon for deaconess was ordained. She left her royal robes to the church at Noyon and gave away her other possessions to the poor.

She then continued her flight to Saix and then to Poitiers . The bishop Germanus of Paris asked the king to give up the persecution. Chlothar sent the bishop to ask her forgiveness and let her know that he would support her plan to found a monastery.

In 558 Radegunde, with the support of Chlothar, who had already unsuccessfully asked Radegunde to return to him, founded the monastery of Sainte-Marie-hors-les-Murs , later the Abbey of the Holy Cross in Poitiers, whose nuns were based on the order of St. Caesarius of Arles lived. The Abbey of the Holy Cross was the first women's monastery in Europe. Chlothar placed it permanently under his protection. Two hundred young girls followed Radegunde's invitation to enter. She appointed her foster daughter and friend Agnes as abbess . According to tradition, Radegunde is said to have chosen the lowest services in the monastery. She also took care of the nursing . Two days a week she gathered the poor and the sick in the monastery bathhouse ; She also washed lepers herself. Radegunde is considered the patron saint of scabies .

At this time the monastery was the most important women's monastery in the Franconian Empire. Radegunde was also in contact with Bishop Gregory of Tours .

With Chlothar's death around 561, the Franconian Empire was divided up among his four sons, from whom Radegunde had the continued existence of the monastery legally secured. She also asked the bishops of Gaul for protection and support for her life's work, who assured her of this protection around 575.

In 565 the writer, poet and priest Venantius Fortunatus traveled to Gaul and stayed in Poitiers. He lived here as a trusted friend of Radegund for twenty years. Through letters and journeys he defended the interests of the monastery vis-à-vis kings and dignitaries.

Radegunde died on August 13, 587 and, at her request, was buried in the monastery church that was consecrated to her .

Soon after Radegunde's death, Venantius Fortunatus wrote a first life story that is an important source. Another vita was created around 600 and was written by the nun Baudonivia of the Abbey of the Holy Cross.

After her death, her reputation as saints quickly spread throughout the empire. After her canonization in the 9th century, around 150 churches were consecrated in France, later also in England, Austria, Belgium, Italy, Canada and the Congo.

In her homeland there were only three churches or chapels with the patronage of St. Radegundis, so z. B. at the Mühlburg in Mühlberg, Thuringia . In Lower Saxony, Adalbert von Bremen consecrated the Wiefelstede Church to John the Baptist and the Radegunde in 1057 .

In May 1562, Huguenots desecrated Radegundes grave. They blew the lid of the coffin and burned some of the bones. Some of the relics were saved and put back in the sarcophagus . Her tomb is still a place of pilgrimage to this day .

On the occasion of the 1300th anniversary of Radegund's death in 1887, Pope Leo XIII donated. a gold crown adorned with precious stones placed on the statue of the saint in the cathedral of Poitiers. A memorial stone was erected on the chapel at the Mühlburg on the 1400th anniversary of her death.

Radegunde is the patroness of Jesus College in Cambridge .