This article looks at the outstanding early Christian authors. The historical representative of a church community is treated under the church father . 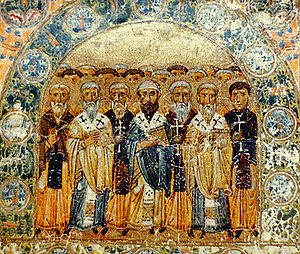 As a church father (from Latin pater ecclesiae to ancient Greek πατὴρ ἐκκλησιαστικός Father ekklēsiastikós ) is a Christian author refers to the first eight centuries of the teaching and the standards of this vital Christianity has helped and so the honorary title of Doctor of the Church was excellent, and his life as a saintly applies .

The Orthodox Church counts all important Christian authors in their field, including those from more recent times up to the present day, among the Church Fathers, whereby no totality is required with regard to orthodoxy . Very few of the Church Fathers are recognized as being flawless in their traditional teachings. The authors of Orthodox Canon Law, to whom most of the classical Greek Fathers belong: Dionysius of Alexandria , Gregorius of Neocäsarea , Athanasius the Great , Basilius the Great , Gregory of Nyssa , Gregory of Nazianzen , Amphilochius, Timothy of Alexandria enjoy a special place , Theophilus of Alexandria, Cyril of Alexandria , Genadius of Constantinople, John IV (Patriarch) , Tarasius of Constantinople and Nicephorus the Confessor. Even John Chrysostom , the founder of the Chrysostomosliturgie is next to St. Basil the Great and Gregory Nazianzen one of the Three Holy Hierarchs (also see below).

The Catholic Church judges a church father based on the following four criteria:

In the Occident, Ambrosius , Hieronymus , Augustine and Gregory the Great are called the great church fathers. In the Orient one means Athanasius , Basilius , Gregory of Nazianzen and John Chrysostom .

Doctors of the Church must always be respected and recognized dogmatists of theology. Your life data do not matter. The exact criteria for this group are:

All the great church fathers are doctors of the church, including those of the Orient. With the addition of other deserving dogmatists, the group of church teachers has now been expanded to 36. They can certainly satisfy the quality of antiquitas , as Hilarius of Poitiers or Leo the Great show.

A third group is designated by the Catholic Church as church writers; these are early Christian authors who are not considered orthodox or holy. Origen and Tertullian belong to this group . 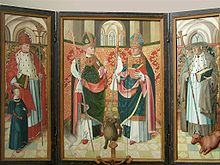 Altar panel with the four Latin Fathers of the Church, Bordesholm Monastery 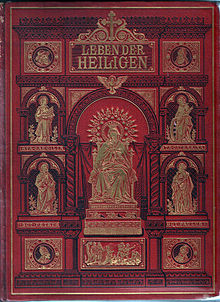 Life of saints . The Latin church fathers are shown in the corner squares of the cover.

In Western art, two groups of four are represented in particular (see Doctors of the Church ):

A seldom depicted group of four who have a certain relationship with the Church Fathers are the " Four Wise Men ".

Church fathers of the 2nd century

Church fathers of the 3rd century

Church fathers of the 5th century

Church fathers of the 6th century

Church fathers of the 8th century

Commons : Fathers of the Church  - collection of images, videos and audio files