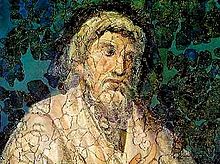 Wall painting from the fourth century

Lactantius was of Berber , non-Christian origin. In Sicca Veneria he became a student of Arnobius the Elder .

Lactantius initially had a successful public career. The Roman emperor Diocletian appointed him as the official rhetorician to Nicomedia ; the journey from Africa is described in his poem Hodoeporicum , which has not survived . There he made the acquaintance of the governor and polemicist Sossianus Hierokles , the philosopher Porphyrios and the later emperors Constantine and Galerius . After converting to Christianity, he resigned his position shortly before the publication of Diocletian's first "Edict against Christians" of February 24, 303, which initiated the persecution of Christians under Diocletian .

As a Latin rhetorician in a Greek city he then lived, according to Hieronymus , in poverty and earned meager earnings from his writings until Constantine became his patron . Because of the persecution of Christians he had to leave Nicomedia and at an advanced age was appointed by Emperor Constantine to teach his son Crispus . In 317 Lactantius Crispus followed Augusta Treverorum ( Trier ); the date and circumstances of his death are unknown.

Lactant is one of the best known apologists (defenders) of early Christianity , that is, he defended Christianity with his writings against the pagan criticism of his environment. The Latin of Laktanz, who also teaches rhetoric, was so good that Pico della Mirandola called him the "Christian Cicero " (Cicero christianus) . However, writers like Jerome expressed doubts about the content of his theology, such as his views on the nature of Jesus. Lactantium did not reject pagan literature, but used it quite extensively and saw its stylistic dexterity as a good means of conveying Christian ideas in a catchy way. Theologically, Laktanz represented an eschatological and a dualistic worldview.

His most important work are the "Divine Instructions" (Institutiones Divinae) , which for apologetic purposes unfold a comprehensive representation and criticism of ancient philosophy, mythology, etc. from a Christian perspective. In the Middle Ages , however, his little writing De mortibus persecutorum ("From the deaths of the persecutors"), in which he tells the life and above all the suffering and death stories of ten Roman emperors , who according to tradition were involved in the persecution of Christians in the The Roman Empire particularly stood out. The work is considered to be strongly propagandistically colored, the respective years of rule are presented in the worst possible light; Nevertheless, the work is a not unimportant source for the history of late antiquity in the time of Diocletian. It also contains one of the versions of Constantine's vision ( De mortibus persecutorum 44: 1-9). A full manuscript was not discovered until 1678 in the French Abbey of Saint Pierre de Moissac .

He dealt extensively with evil or evil , asked the following questions and developed possible alternatives: Either God wants to eliminate the evils and cannot: Then God would be weak, which would not apply to him, or he could and wants to not: Then God would be jealous of what was alien to him. Or he doesn't want to and can't: Then he would be weak and envious at the same time, i.e. not God. Or if he wanted to and could do it, which was only befitting God, then he asked further: Then where do the evils come from and why does he not take them away?

Vides ergo magis propter mala opus esse sapientia: quae nisi fuissent proposita, rational animal non essemus. “So you see that we need wisdom above all because of evil. If this were not there, we would not be reasonable living beings. ”According to Lactantius, the evils serve the knowledge of the good, the question remains open, why God created the opposition between good and evil.

Lactantium rejected the spherical shape of the earth , which only a few educated people did in the period from late antiquity to the renaissance. For him, the resulting possibility of the existence of antipodes , i.e. people in the southern hemisphere below, contradicted the statements of the Bible (for example Rom. 10.18  EU ). The church father Augustine of Hippo joined in the rejection of the antipodes, even if he believed the spherical shape of the earth to be possible. In De genesi ad litteram , Augustine exhorted the Christian preachers not to contrast proven statements of the pagan philosophers about the cosmos with nonsensical assumptions derived from the literal interpretation of Scripture. In 748 Boniface accused Virgil of Salzburg of heresy with Pope Zacharias , referring to lactance, since he was considering a separate redeemer for the antipodes. Philosophers such as Blaise Pascal and René Descartes reminded the Church of this letter when they rejected the heliocentric system on the basis of scriptures.

Beginning of the Divinae institutiones in a magnificent Renaissance manuscript (Florence, around 1425)