The unknown author is the author of a collection of writings which, according to him, come from the Dionysius Areopagita mentioned in Acts 17.34  ELB . The actual identity of the author is not yet known to the researchers, despite some suggestions. Both the literary dependencies of his writings and quotations in his work point to the Antiochene area as the place of origin. His noticeably awkward Greek can also be explained by the bilingualism practiced there at the time . Presumably it was a Syrian monk. Maybe he was close to the theological and philosophical school of Caesarea .

In his works, Pseudo-Dionysius Areopagites reinterprets the Neo-Platonism, which was then popular as a doctrine of salvation, in a Christian way. In particular, numerous traces of the Neo-Platonist Proklos can be detected. In addition, the author is under the influence of Clement of Alexandria , the " three Cappadocians " and Origen .

The earliest date for the writing of his writings is the year 476, since Pseudo-Dionysius presupposes elements in the divine service that were only included in the liturgy by Petrus Fullo at this time . The latest period for the creation of the works is the period between 518 and 528, for which quotations from Severus of Antioch are documented.

Dionysius the Areopagite as bishop and one of the seventy apostles. Byzantine mosaic from the beginning of the 11th century, Hosios Lukas monastery in Boeotia , central Greece

Some in the Orthodox Churches still hold to an equation of Pseudo-Dionysius Areopagita with the Paulus student Dionysios Areopagita . According to Eastern tradition, Dionysius had studied astronomy in the Egyptian city of Heliopolis , the seat of an early Christian diocese , and was orally initiated into the divine mysteries by Hierotheos (55–60), the first bishop of Athens appointed by Paul (10–64) . After the death of his bishop and teacher, Dionysius succeeded him in office and wrote down the traditional teachings. In 96 Dionysius was martyred in Athens under Emperor Domitian (81–96) at the age of 90 .

The Orthodox tradition counts Dionysius among the Seventy Little Apostles . His writings were supposedly kept in hidden manuscripts by theologians, but also in the Alexandria archives. The content of his works was known and from Clemens of Alexandria (around 150-215), Origen (Alexandrians, 185-254), Dionysius of Alexandria († 264/65), Gregory of Nazianz (329-390) and Kyrill von Alexandria (375 / 80–444), from the latter with a reference to the archives of the Alexandria Library. An Orthodox commentary on the Areopagite is known from Dionysius of Alexandria . In the year 451 quoted according to Orthodox tradition Juvenal of Jerusalem , 422–451 bishop of Aelia Capitolina (Jerusalem) and 451–458 first patriarch of Jerusalem , from the writings of the "great Dionysius" ( On the divine names 3,2). 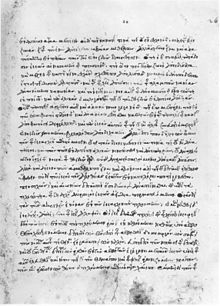 The beginning of De ecclesiastica hierarchia in the Latin translation by Ambrogio Traversari . The picture in the initial shows the alleged author Dionysius Areopagita in conversation with a cleric. Biblioteca Apostolica Vaticana, Vat. Lat. 169, fol. 31r (15th century)

The writings of Pseudo-Dionysius include:

The authenticity of the Areopagitic writings was already questioned by Bishop Hypatios of Ephesus (531-536) in 531 because they were not known to tradition. At a synod of proponents and opponents of the two-natures Christology of the Council of Chalcedon (451) in Constantinople , as chairman of the meeting, he stated to the Severians : “If none of the ancient writers mention them, I don't know how you can now prove that they belong to Dionysius. "

The synod expressed itself on behalf of the summoning emperor Justinian I (527-565) against the theology of the so-called Monophysites . In the dispute at that time, the followers of patriarchs (from 512) Severus of Antioch were called Severians . As an opponent of the Council of Chalcedon, he had to flee to Egypt after the death of Emperor Anastasios I (July 9/10, 518), where he came into contact with the Pseudo-Areopagitica and died on February 8, 538 in Xois in the Nile Delta. In 528 his writings, which were written in Greek in exile, were translated into Syriac. This translation is considered to be the earliest evidence of quotations from the works of the Pseudo-Dionysius Areopagites in Western science.

Between 536 and 543/553 the Corpus Dionysiacum was edited and published by Bishop John of Skythopolis or scholars of his circle. This edition with a marginal commentary ( Scholien ) and a prologue is the starting point for a broad history of the work's impact. After that, it was quickly agreed - especially in the west of the Mediterranean - to recognize the authenticity (as already with Gregory the Great [† 604]). The first comment on the scriptures comes from Maximus the Confessor († 662). Through this interpretation Dionysius Areopagites was raised to authority in the area of ​​the Byzantine Church. In the period that followed, the Areopagitic literature was considered to be part of the Bible canon due to its alleged early Christian origin and had a great influence on medieval theology of both the Eastern and Western Churches. There are authors who, looking back over the past one and a half millennia of theological history, consider Dionysius to be the most influential theological author after the biblical writings.

From the 9th century onwards , Abbot Hilduin's Post Beatam ac Salutiferam , also known as Areopagitica , equated the areopagite with the early Christian Parisian martyr St. Dionysius , after whom the St. Denis Abbey near Paris is named. The Greek-speaking theologian was franked and a Latin version of the texts was widely used. The abbey was probably responsible for the amalgamation of the three bearers of the name, i.e. Dionysius, the martyr and author of the Areopagitic writings, mentioned in the Bible.

After returning to St. Denis around 1121, Petrus Abelardus noticed the various people with the name "Dionysius" while studying the history of the patron. The abbey also had a good Greek edition of the works of Pseudo-Dionysius, a gift from Charles the Bald , which had been translated into Latin by Johannes Scotus Eriugena in the 9th century. This translation made both Neoplatonism and the doctrine of the Nine Choirs of Angels of Pseudo-Dionysius widely known. For the entire Middle Ages , the concept of Platonism , mysticism , cosmic emanation theory and (moderate) Monophysitism was to become a system of unique fascination, especially in the negative theology of the important mystic Meister Eckhart and his student Heinrich Seuse .

After criticism of the authenticity of the writings, Petrus Abelardus then had to leave the monastery, so that evidence of the next serious doubts could only be found again in Laurentius Valla and Erasmus of Rotterdam in the 15th and 16th centuries. The proof of the inauthenticity could only be provided through philological research in the 19th century by Hugo Koch (1869–1940) and Joseph Stiglmayr (1851–1934). Since then it has been known that Dionysius of Areopagus, who according to the Acts of the Apostles was converted by Paul, cannot be the author of the writings ascribed to him.

In terms of the history of its effects, Pseudo-Dionysius is important as theoretician of the church hierarchy. Both in theology proper (doctrine of the Trinity) and in the angelology ( Angel -Teaching) he is seeking to legitimize the sanctity of the Church's power and its secular structure of spiritual direction theologically. For this reason the “Heavenly Hierarchy” and the “Church Hierarchy” are closely linked: Through its mystification, the ecclesiastical office is sacralized. In addition, his mystical theology with the two paths of knowledge of God and the Christian appropriation of Neoplatonism in the Corpus Dionysiacum remains fundamental for the theology of the coming centuries.

For Pseudo-Dionysius God is the cause, beginning, being and life of all things. God is the one and perfect beyond all being ( hyperousios ), which is never reached, but remains over-recognizable ( hyperagnostos ). The knowledge of God leads by analogy to the cause of everything, but without knowing God according to his essence. Attributing attributes to God ( theologia positiva , kataphatike ) must be based on the biblical revelation of God. Denying God's attributes ( theologia negativa , apophatike ) is an attempt to make the unspeakable God recognizable. Through purification ( catharsis ) and enlightenment ( photismos ), perfection ( teleiosis ) can be achieved in a knowledge that is not cognitive in the normal sense.

To person and work