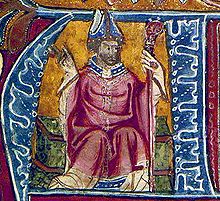 Coming from poor Anglo-Norman backgrounds, Grosseteste studied the artes liberales at the cathedral monastery in Hereford before 1190 and was accepted into the service of the local bishop. He then studied theology in Paris and was perhaps the first Chancellor of Oxford University in 1214 . In 1225 he, who was still a deacon , received his clerical beneficiaries; in 1229/1230 he took care of the theological training of the English Franciscans .

1235 became the greatest bishop in Lincoln. He looked after his diocese, who identified himself with the church reforms decided on at the 4th Lateran Council (1215), in pastoral care and administration. His own reform impetus brought him, especially after the Council of Lyon (1245), into increasing opposition to the papacy. So he presented Pope Innocent IV (1243–1254) with a memorandum in 1250 in which he criticized the papal granting of benefits and made them responsible for the grievances in the English Church. In the last year of his life, Grosseteste had to grapple with a case of papal benefices (to the nephew of the Roman bishop) even at his own cathedral in Lincoln.

Robert Grosseteste died on the night of October 8th to 9th, 1253. Various attempts at canonization ( canonization ) were unsuccessful.

Many works by Robert Grosseteste have come down to us. Grosseteste was considered a master of Aristotelian logic , as an observer of natural phenomena (optics, climate, form, movement, time), which he analyzed with mathematics and geometry , as a translator from the Greek (Aristotelian ethics, writings of John of Damascus and Pseudo -Dionysius ), as a metaphysician ("God is light"). In three works - Compotus , Compotus Minor , Compotus Correctorius - he dealt with the Computus . A fourth work with u. a. Carmen de mundo et partibus is attributed to this topic (Axel Bergmann: Carmen de mundo et partibus , Frankfurt am Main 1990). Scriptural commentary, for example a hexaemeron , sermons and an allegorical poem about redemption ( Château d'Amour ) round off the literary oeuvre of the important conservative church scholar. His theories of light paved the way for experimental optics ; his work was continued by Roger Bacon .