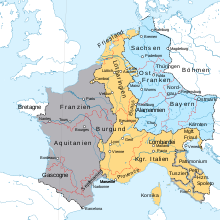 ﻿Empire of Charles the Bald after the Treaty of Verdun 843

﻿Empire of Charles the Bald after the Treaty of Meerssen 870

Charles II is enthroned between two arms bearers and female personifications from the countries of Francia and Gothia , miniature from the Codex aureus of St. Emmeram , Reims around 870. The depiction of Emperor Henry II in his sacramentary is based on this 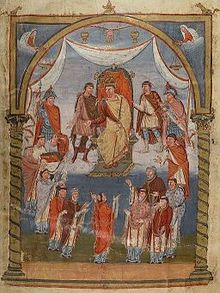 Surrounded by bodyguards and companions, Karl receives a delegation of monks from the Tours monastery , who, on behalf of their abbot Vivian, bring a Bible. (Dedication image from Vivian's Bible , 875; Paris, Bibliothèque nationale de France, Ms. lat. 1, fol. 423r). 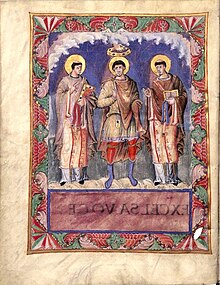 Miniature from the sacramentary of Charles the Bald : the ruler between Popes Gregory IV and John VIII.

Karl was the youngest son of Ludwig the Pious from his second marriage to Judith . After the execution of Count Bernhard von Septimanien in 844, which was arranged by Karl, the suspicion arose that he had been killed for adultery with Karl's mother. Above all, Karl's rival brothers fueled the rumor that Karl might not be Ludwig's son at all, but the descendant of Bernhard from his relationship with Judith.

His upbringing by Walahfrid Strabo , who was called to the court of Charlemagne in Aachen , could not be confirmed.

His nickname the Bald could indicate that before the Reichstag in Worms 829, in contrast to his older brothers , Karl was not taken into account in the division of the Franconian Empire, so up to this point he was bald in the sense of landless / without possessions .

At the age of six, Karl was appointed dux Alemanniae in August 829 . As early as 838 he was crowned sub-king of Neustria (northern France). After the death of Emperor Ludwig in 840 and the victory over the eldest brother Lothar I in the Battle of Fontenoy in 841, together with Ludwig the German, the western third of the empire from the Pyrenees to the Scheldt fell to Charles in the Treaty of Verdun in 843 . A little later, the Treaty of Coulaines (November 843), which severely restricted his power, was imposed on him by his followers . In 848, after the deposition of his nephew Pippin II , he finally added direct rule over Aquitaine to the West Franconia that was thereby consolidated .

In 864 he issued the Edictum Pistense , in which, for the first time in Europe, it was legally stipulated which properties money coins had to have in order to be recognized as fit for payment.

After the death of Lothar II in 869, the ruler in the northern third of the Middle Kingdom divided by Lothar I in 855 , he tried to join the entire area to his western empire, but had to share it with his half-brother Ludwig the German in the Treaty of Meerssen in 870 .

The west of France was hit by Viking attacks several times during his reign . In 845 a large Viking fleet appeared before Paris, led by a certain Ragnar ; the Vikings only withdrew after paying a large sum of money. This was to be followed by further sieges by Vikings in 856, 865 and 866. Charles proved incapable of organizing an effective and sustainable defense, which during the time of his rule contributed to the decline of the political power of royalty and the rise of the high nobility.

He himself died in October 877 and was buried in Nantua , later reburied in the Saint-Denis basilica . When the royal tombs of Saint-Denis were sacked during the French Revolution , his tomb was opened and looted on October 18, 1793, and his remains were buried in a mass grave outside the church.

Karl's heirs were Ludwig the Stammler in western France and his East Franconian nephew Karlmann in Italy , eldest son of the East Franconian King Ludwig the German; In Burgundy, Boso von Vienne founded the Kingdom of Lower Burgundy in 879 .

He had nine children from Irmentrud:

He had at least three children from Richildis: