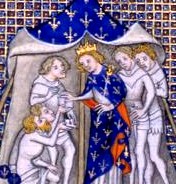 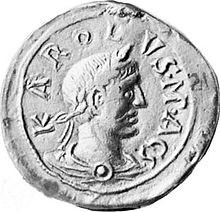 Seal with the portrait of Charles III.

Grave in the choir area of ​​the Abbey Church of St. Maria and Markus , Reichenau

According to today's knowledge, he was wrong to carry the non-contemporary epithet of fat . In the German rulers lists he is referred to as the third , but not in French lists. In historical studies, Karl is regarded as a “weak” ruler, but this may also have something to do with his illness; he probably suffered from epilepsy .

Karl was the third and youngest son of Ludwig the German and his wife Hemma from the Guelph family . In the division of the kingdom of his father, he was 865, the East Frankish part kingdom Alemannia assigned in which he assumed power after the death of the 876th

Karl profited from the expansion policy of his brothers, because after their death he also took over their parts of the empire in Eastern Franconia. In November 879 he received the Kingdom of Italy from his brother Karlmann , King of Bavaria and Italy, shortly before his death (September 22, 880). The partial kingdom of Bavaria initially received the third brother Ludwig the Younger . After his death on January 20, 882, Karl finally took over the king's power in the whole of Eastern Franconia.

Charles III had quite good relations with the papacy . On February 12, 881 he was crowned emperor by Pope John VIII in Rome, which further stabilized his position in the crumbling Carolingian Empire. However, Charles did not provide the support in Italy that the Pope had hoped for; his means of power were apparently insufficient for this. The high point of his reign was the (only short-term) unification of West and East Franconia. After the death of his second nephew Karlmann , the king of West Franconia , in December 884, Karl III. 885 proclaimed ruler there too.

Charles' reign was overshadowed by the continuing threat of Viking raids in the Rhineland , which he was unable to counter effectively. At times there were also tribute payments to the Normans . In 882 an agreement was reached at Asselt that was ultimately quite unfavorable for the empire, but other Norman groups repeatedly attacked the empire. A large Norman army even besieged Paris in 885/86 . Karl's government was also not able to assert itself in the entire empire. To make matters worse, Karl suffered from epilepsy and his health deteriorated further and further, so that he was practically no longer capable of governing. His most important political advisor was Liutward von Vercelli , who was overthrown in 887 by an intrigue at court.

In the west, Karl ruled until shortly before his death in 888. In eastern France, however, he lost power in November 887 after a brief armed conflict with his nephew Arnolf of Carinthia and abdicated at a Reichstag in the Palatinate of Trebur. Charles died on 13 January 888 in Neudingen on the Danube and was in the choir of the Abbey Church of St. Mary and St. Mark's on the Lake Constance situated island Reichenau buried.

In the Bavarian (Regensburg) continuation of the Annales Fuldenses for the year 888 it is noted that after the death of Charles many reguli (petty kings) in Europe seized power. The Carolingian empire had thus effectively disintegrated.

In 862 Karl married Richardis , daughter of the Alsatian Count Erchanger from the Ahalolfinger family , who became abbess in the Säckingen monastery in 877 and in Andlau in 887 . The marriage remained childless, but he and a concubine had an illegitimate son, Bernhard, who was probably born in 876 and killed in 891/892. Richardis himself left Karl due to court intrigue in 887 and retired to the Andlau monastery.

In the years from 879, when his marriage had remained childless for 17 years, Karl planned to build another member of the Carolingian House as his successor. In this context, the adoption of the West Franconian ruler Karlmanns in 883/884, who died in 884, is certain. It is possible that he had already had his older brother Ludwig III. adopted, but who had died in 882. When Karl finally became the sole ruler of the Franconian Empire, as numerous relatives had died, this possibility was largely eliminated. Now he made the attempt to get his biological son Bernhard through Pope Hadrian III. to be legitimized. But since Hadrian died on the way to the Frankish Empire in 885 and his successor's position on this question was by no means certain, this attempt also failed. In 887 Karl therefore adopted Ludwig Bosonides , who was descended from the Carolingian Ludwig II of Italy through his mother and thus had at least a certain dynastic legitimacy.

In the succession struggles after the death of Charles III. Bernhard did not play a significant role. Ludwig Bosonides was crowned emperor in 901, but only had a power base in Italy and was driven out and blinded by his rival Berengar I in 905 .

Wikisource: Karl the Fat in The German Emperors by Max Barack  - Sources and full texts