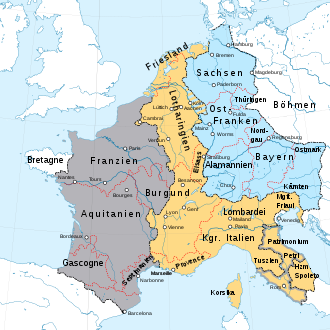 ﻿West Franconian Empire after the Treaty of Verdun of 843

The Western Francia ( Latin Francia occidentalis ) was the western part of the divided Franconian Empire . It was created in 843 by the Treaty of Verdun and was expanded in 870 by the Treaty of Meerssen , then narrowed in 880 by the Treaty of Ribemont . The Kingdom of France developed from the West Frankish Empire in the course of the 9th and 10th centuries .

The process of the creation of France was slow and gradual and the people living at the time were hardly aware of it. Therefore it is difficult to fix in time. It is believed that the process no later than the dynasty change of 987 (transition from the Carolingian to the Capetians was completed). Therefore, the Capetians who reigned from 987 are always referred to as kings of France . The Carolingian and Robertine kings in the period between the middle of the 9th century and 987 are referred to in modern popular scientific and scientific literature partly as West Franconian and partly as French kings, depending on where the researchers concerned start the transition from western France to France. All of these periodization approaches are arbitrary. Even the change of 987 was not seen by contemporaries as a major turning point or even as the foundation of an empire. At that time one did not even see the final disempowerment of the Carolingians, but only an episode in a long-lasting power struggle between two rival sexes . Only in the course of the following decades did the Capetian rule prove to be permanent.

With the Treaty of Verdun (843) the Franconian Empire was divided into three parts: