Provisional Government of the French Republic

When Provisional Government of the French Republic ( French Gouvernement provisoire de la République française , shortly GPRF ) in the June 3, 1944, Algiers formed French government of Charles de Gaulle and the governments of France immediately after the liberation and the fall of the Vichy regime to designated for the establishment of the IV Republic . This was preceded by the III. Republic from 1870 to 1940.

Presidents of the Provisional Government were: 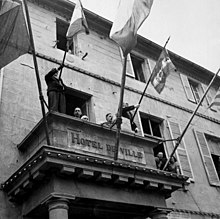 The key challenges the Provisional Government initially faced were:

After the government reshuffle of September 9, 1944, the de Gaulle government included members from all forces not compromised by war crimes and collaboration; H. the Communists (PCF) , the Socialists (SFIO) , the newly founded Christian Democrats (MRP) and the Radical Party . Of 22 ministries, only eight were with former III. Republic occupied.

Important political innovations in the de Gaulle government even before the elections to the National Constituent Assembly on October 21, 1945 were the introduction of women's suffrage , the reintroduction of the referendum ( there had been no referendums since the plebiscites of the Second Empire ) and the introduction of proportional representation . In addition, the de Gaulle government began an extensive program of economic and social reform. a. the establishment of works councils , the establishment of a comprehensive social security system and the nationalization of key industries and transport companies (coal mines, creation of the state-owned energy company EDF and the airline Air France ), and the collaboration of compromised companies.

On October 21, 1945, elections to the National Assembly were held for the first time since the war ; The strongest party was the PCF (26.12% of the vote), followed by the MRP (23, 81%), SFIO (23.35%), the moderate right (15.60%) and Radicals (10.49%). At the same time, voters decided in a referendum with 96.37% of the vote that this assembly should draft a new constitution and with 66.48% passed a law on the provisional political order. Among other things, this envisaged the limitation of the mandate of the Constituent Assembly to seven months and the parliamentary responsibility of the Provisional Government towards the Assembly.

On November 13, 1945, the Constituent Assembly unanimously approved the de Gaulle government. The relationship between de Gaulle and the communist-socialist majority in the assembly quickly deteriorated: the communists claimed one of the key ministries (interior, foreign or defense ministries) as the strongest party, including de Gaulle in view of the looming Cold War between the USA and the Soviet Union was not ready. The socialists demanded a significant reduction in the defense budget, which de Gaulle rejected.

At the core of the conflict, however, is de Gaulle's rejection of the restored power of the parties and the parliamentary system of government . On January 20, 1946, he therefore announced his resignation, which he explained to the Council of Ministers as follows:

“Exclusive rule of the parties has been restored. I reject this. But without forcibly establishing a dictatorship, which I do not want and which would undoubtedly end badly, I do not have the means to prevent this attempt. So I have to withdraw. "

→ Main article : The emergence of the IV Republic

The first draft constitution, which was passed by the constituent national assembly on April 19, 1946 with the votes of the communist-socialist majority, was rejected by the referendum of May 5, 1946.

Despite the slight change in the majority structure and the violent public criticism of de Gaulle, the second draft constitution, which the Constituent National Assembly adopted on September 29, 1946, provided for a parliamentary system of government in which the national assembly clearly took precedence over the second chamber, the Conseil de la République received. The constitution of the fourth republic was adopted on October 13, 1946 in a referendum with 53.5% of the vote. However, 31.2% of the electorate stayed away from the vote, so that de Gaulle's assessment is almost correct that a third of the French have rejected the constitution, a third abstained and only a third agreed.

The governments of Gouin, Bidault and Blum

After de Gaulle's resignation, the three big parties agreed on a coalition agreement that established the governments of " tripartism ". The new President of the Provisional Government was initially the socialist and former President of the National Constituent Assembly Félix Gouin, who was replaced by Georges Bidault after the success of the MRP in the elections for the second National Constituent Assembly. However, the communists had again failed to obtain one of the three key ministries required for home affairs, foreign affairs or defense.

The governments of Gouin and Bidault were burdened by growing tensions between communists, socialists and Christian Democrats under the influence of the changing global political situation as well as by the outbreak of the Indochina War following the proclamation of the Republic of Vietnam by Ho Chi Minh .

After the first regular election to the National Assembly of the Fourth Republic, a socialist minority government under Léon Blum held office as the last Provisional Government for a month, because the second chamber of parliament and the president had to be elected before a regular government could be established. The Blum government at least managed to take measures to combat inflation, which were reflected in a 5% decline in the general price level.

On January 16, 1947, the socialist Vincent Auriol was elected President of the State by the National Assembly and the Conseil de la République , and on January 22, the majority of the National Assembly voted in favor of the investiture of Prime Minister Paul Ramadier , so that the time of the Provisional Governments came to an end.