Vincent Auriol (born August 27, 1884 in Revel , Haute-Garonne department , † January 1, 1966 in Paris ) was a French statesman and socialist politician. He was the 16th President of the French Republic from 1947 to 1954 and the first President of the Fourth Republic and the French Union , which lasted until 1958.

After studying law , philosophy and political science , the son of a baker settled in Toulouse as a lawyer and also worked as a journalist. In 1904 he became a member of the Fédération socialiste (later SFIO ) and in 1914 its deputy for the constituency of Haute-Garonne. From 1919 to 1936 he was secretary of the socialist parliamentary group. His name is closely linked to that of Léon Blum , who in 1936 after the election victory of the Left became Prime Minister of the Government of the Front Populaire (Government of Blum I), in which Auriol headed the Ministry of Finance in 1936/37 . At that time he reformed the Banque de France and became Minister of Justice in 1937. 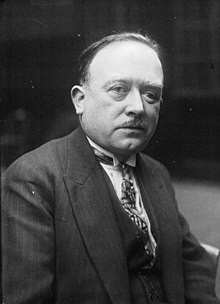 In 1940, after the German invasion and the military defeat of France , he spoke out against surrender and voted against the authorization of Marshal Pétain to set up the authoritarian Vichy regime as “Chef de l'État français” in Vichy, which was completely dependent on the occupying power . Auriol was - like Blum, who was later deported to Germany - interned, joined the Resistance and escaped in 1943 to de Gaulle , the head of Free France in London .

In 1943 and 1944 Auriol was a member of the provisional national assembly in Algiers and - after the liberation of Paris - in Paris. In 1945 he became Minister of State and Deputy Prime Minister under General de Gaulle. He represented France at the United Nations and became president of the constituent national assembly in January 1946 .

After the entry into force of the new constitution - the first draft of which had been rejected in a referendum - Vincent Auriol was elected first President of the Fourth Republic and the (following the example of the British Commonwealth of Nations newly created) " Union française " elected. His inferior conservative competitor was Auguste Champetier de Ribes (1882-1947). In 1947 Auriol forced the expulsion of the communists under Maurice Thorez from the coalition government of the socialist Paul Ramadier . After the losses of the divided left in the parliamentary elections on June 17, 1951 , he appointed conservative politicians such as Antoine Pinay and Joseph Laniel to head the government, but he did not succeed in winning the opposition Gaullists to cooperate.

During the Cold War he consistently pursued the foreign policy orientation of the Fourth Republic on the course of the USA and Great Britain towards the Eastern Bloc and advocated a policy of strength against the independence movements in the ex-colonies, which now had the status of "associated" areas or states. In 1949 he played a crucial role in the reinstatement of the Vietnamese Emperor Bảo Đại (who had abdicated in 1945), although the French socialists initially supported the communist-nationalist government formed by Ho Chi Minh . In 1953 Auriol accepted the banishment of the Moroccan sultan (and later king) Mohammed V by the French general resident Marshal Alphonse Juin .

Auriol spoke out against the European Defense Community EVG - which was ultimately rejected by the French parliamentary majority - and German rearmament . After the end of his seven-year term ( Septennat ), he rejected the request of the Socialists to stand for re-election. His moderately conservative successor René Coty was only chosen in the 13th round after a seven-day chaotic election.

In 1959 Auriol left the Socialist Party, led by his adversary Guy Mollet , in a dispute over their decision to tolerate General de Gaulle's government and to participate in the establishment of the Fifth Republic . In 1960 he resigned from the constitutional council ( Conseil constitutionnel ) under protest , to which he automatically belonged as a former head of state, because he strictly rejected the constitutional development under de Gaulle. Auriol was a staunch opponent of the introduction of popular elections for the president.