The coat of arms of the King of France since the 13th century (France ancien): The French lily banner ( Fleur-de-Lys )

The head of state is at the top of the state hierarchy of offices . It represents the state internally and externally. In France , the head of state is the president . His predecessors as the highest authority included kings and emperors . The French monarchs and presidents are included in the list of heads of state of France . Also listed are the kings of western Franconia, from which France arose, although it is incorrect to refer to the western Franconian kings of the 9th and 10th centuries as "kings of France". The West Franconia came into being through the division of the Franconian Empire in the Treaty of Verdun of 843. The transition from West Franconia to France was fluid and extended over a long period, so that no specific point in time can be set for the creation of France. 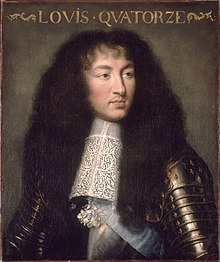 A clear demarcation between the Frankish Empire, which emerged in late antiquity as part of the migration of peoples , and the French state is not possible. The French understanding of history emphasizes the continuity back to the time of the Merovingians . The first de facto official work of French historiography, the Grandes Chroniques de France from the late 13th century, divides the history of the Franks and France into the successive dynasties of the Merovingians, the Carolingians and the Capetians . To this day, Chlodio (5th century) is named first in French rulers' lists as the oldest historically tangible Frankish king. In older historical works, his legendary father Faramund appeared at this point, and some medieval lists of kings go back to the mythical Trojan king Priam .

An older approach, no longer represented today, sees Hugo Capet (987–996) as the first king of France, since with him a French national dynasty took over rule. This view is no longer upheld in research today, as the change of dynasty of 987 was not viewed by contemporaries as such a turning point.

The following list begins with the division of Verdun in 843. For the kings who ruled before that, see the list of Frankish rulers .

According to the Carolingian self-image, after the division of the empire in 843, the West Frankish king was still “King of the Franks” (Latin: Francorum rex, French: roi des Francs ). This is how the kings were called by contemporary authors, while in official documents they mostly only used the simple designation "King" ( rex ), following the example of Louis the Pious , who since his coronation as imperator exclusively called himself imperator augustus without a national or national name . Only from Charles III. The simple- minded (893–923) was linked to a political agenda by deliberately including the title “King of the Franks” in his documents from 911 onwards. In that year, Ludwig the child, the last Carolingian of the Eastern Empire died and Charles III. the simple-minded, as the senior of the Carolingian dynasty, now also claimed rule in the Eastern Empire. With the recognition of Charles the Fat in East Franconia as King of the West Franconians in 884, he could even invoke a precedent. In the Treaty of Bonn 921 , however, Karl had to give up his claim to rule over the Eastern Empire. Regardless of this, he retained the title of "King of the Franks", to which his successors also held on.

In addition to the western part of the old Franconian settlement area between Loire and Scheldt , the former Neustrian Francia (translated into German as " Franzien "), the West Franconian Empire also included settlement areas of other peoples, such as the Gallic Aquitaine, Burgundy, Bretons and since the 10th Century also Normans. After the kingship of the last Carolingians and the first Capetians was characterized by a persistent phase of weakness and feudal disintegration and, from the 12th century, came back to a universal concept of monarchy, this was also reflected in the title of its kings. Philip II August (1179–1223) was the first to use the title rex Franciæ in his documents , initially alongside the traditional title Francorum rex , until it disappeared from royal correspondence at the end of the 13th century. In Old French, however, the new title as roi de France was still derived from Francia and appears in this form for the first time in a document from King Louis IX. from the year 1241. Translated into German, the title was literally "King of Franconia", although "France" was the common name of the country. In this case, too, the title was program, because it no longer identified its bearer as the ruler of an ethnic group, but of a geographically defined area of ​​rulership: "France" as the scope of its legislative and ruling power, precisely its kingdom, including all subjects who are independent of them ethnic origin in the French colloquial language were soon only known as Français ( French ). At the same time, a new concept of the state manifested itself in this title, in which the feudal union state was replaced by a transpersonal and universal monarchy . The continuity to the old empire of the Franks could be preserved in the new title by changing the (ethnographic) name of the people into the (geographical) name of the kingdom. It should be noted that the term Francia was used in the narrative chronicles as a paraphrase for the western empire before the 13th century and that the title Francorum rex , subordinate to the title rex Franciæ , continued to be used, especially on seals, until the end of the monarchy stayed.

Until the French Revolution in 1789, the official title of the rulers of France was “King of France”, between the years 1284 and 1323 and 1572 and 1791 with the addition “and of Navarre” (Latin: rex Franciæ et Navarræ, French: roi de France et de Navarre ), as they also served as kings of Navarre in those periods . After the elimination of the Ancien Régime by the Revolution, the constitution passed on September 3, 1791 changed the title of head of state to “King of the French” ( roi des Français ), since the kingship is no longer through the divine right , but through the will of the people should be legitimized. The two empires from 1804 to 1815 and 1852 to 1870 ( empereur des Français ) as well as the bourgeois kingship from 1830 to 1848 followed the same principle . Only during the restoration phase between 1814 and 1830, in which the aim was to restore pre-revolutionary conditions, was action taken back once more to the traditional royal constitution.

While the constitution of the First French Republic (1792-1804) did not provide for a formal head of state, the executive power of the republican France was taken by an elected president from the Second Republic (1848-1852). His official title was always "President of the French Republic" ( président de la République française ). The head of state of the short-lived “ Vichy regime ” (1940 to 1944), which collaborated with Nazi Germany , carried the simple official title of “head of state” ( chef de l'État or chef d'État ). In the period from 1944 to 1947, the French state had no formal head. During this time, the presidents of the Provisional Government are listed. Only with the proclamation of the Fourth Republic in 1947 did the country get a president again.

Since King Henry IV ascended the throne in 1589, every French head of state has also been a prince of the Pyrenees state of Andorra ( prince d'Andorre ), which he presides over in co-lordship ( cosuzeraineté ) with the Bishop of Urgell .

The West Franconian Empire was founded on August 10, 843 by the partition treaty of Verdun .

The first republic was proclaimed on September 21, 1792 after the king had been deposed. She did not have a formal head of state, but was represented in the succession of three executive bodies, the chairmen of which can be regarded as the "first men of the state".

The first empire was established on May 18, 1804 when the senate conferred the title of imperial on the consul Napoléon Bonaparte .

On April 1, 1814, the French Senate proposed the leadership of a provisional government to Talleyrand , which in turn offered the kingship to the Bourbons, who were returning from exile. In the Charte constitutionnelle passed on June 14, 1814 , the restoration of the monarchy was enshrined in the constitution.

Restoration of the empire after Napoleon's return from exile on March 20, 1815.

The constitutional monarchy, which is generally known as the “ July Monarchy” because of its founding in the Revolution of 1830, was established on August 6, 1830 when the Chamber of Deputies applied for royal dignity to the Duke of Orléans and enshrined it in a new constitution the next day.

The second republic was proclaimed on February 25, 1848. In June, to put down the June uprising, the National Assembly handed over executive power to the Minister of War, Louis-Eugène Cavaignac (military dictatorship).

The Provisional Government of the French Republic was formed on June 3, 1944 in Algiers with General Charles de Gaulle at its head. On August 25, 1944, they moved into Paris, which had been liberated by German troops.

The Constitution of the Fourth Republic came into force on October 27, 1946.

The constitution for the Fifth Republic came into force on October 5, 1958 and is still in force today.