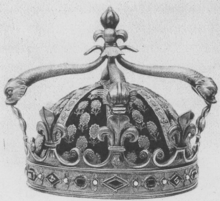 Crown of the Dauphin Louis Antoine worn at the coronation of Charles X in 1824 .

Heraldic representation of the crown of the Dauphins

Dauphin was the name of the heir to the throne of the King of France at the time of the Valois and Bourbon dynasties .

The title "Dauphin" (literally: " Dolphin ") goes back to the nickname of Count Guigues IV of Albon († 1142), who called himself le Dauphin . This nickname became a title under his descendants, the dolphin became their heraldic animal and finally gave the county of Albon in Viennois the name " Dauphiné " (literally: "Delfinat"). In 1349 the childless Dauphin Humbert II became a monk and gave his principality to the French crown, d. H. King Philip VI Since the Dauphiné de jure belonged to the Holy Roman Empire and King Philip did not want to be a feudal lord of the Roman-German Emperor, he passed the principality along with the title Dauphin to his grandson and future heir to the throne, the later King Charles V , who then passed both on passed on his son, the later Charles VI. This practice then solidified, and after the middle of the 15th century (the German emperors had meanwhile given up their claims to the Dauphiné) the respective French crown prince was called the Dauphin , or Dauphin de France (similar to the English crown prince traditionally Prince of Wales or the Spanish Crown Prince Príncipe de Asturias ).

The title was only available to descendants of the reigning king, but not to heirs to the throne who succeeded him as younger brothers or who came to the throne from sidelines of the ruling house. Therefore z. B. the important kings Francis I or Henry IV never Dauphin.

The last French crown prince to be officially called le Dauphin was Louis-Antoine de Bourbon, duc d'Angoulême (Louis XIX.). He was the son of Charles X , who resigned after the July Revolution of 1830 and renounced the throne. The eldest son of the French pretender to the throne from the House of Bourbon continued to carry the title as heir apparent during the Second Empire and the republics.

Today's holder of the pretender title Dauphin de France is Gaston Louis Antoine Marie d'Orléans (* 2009), eldest son of the pretender to the throne and head of the House of Orléans , Jean d'Orléans , Count of Paris (* 1965). The respective French pretender to the throne still awards titles of dukes and counts within his family, which today's French courts refer to as purely courtesy titles, but which are also used as such.

In today's French usage, the word “dauphin” is also used in a different, more general meaning. It denotes the desired or designated successor of a higher official.