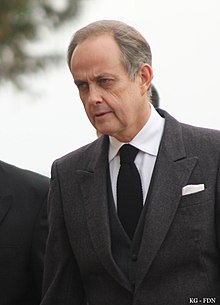 Jean Charles Pierre Marie d'Orléans, Count of Paris (born May 19, 1965 in Boulogne-Billancourt ) is the current head of the House of Orléans , which ruled the French Kingdom from 1830 to 1848 as the last line of the House of Bourbon .

The House of Orléans had exiled France by law from 1886 to 1950; only the grandfather Henri d'Orléans was able to return afterwards. Jean d'Orléans has had the title of Duke of Vendôme under private law since September 27, 1987, and that of Dauphin of Viennois since June 19, 1999. In 2006, his family made him Dauphin de France , whereby his older brother, François d 'Orléans († 2017) was taken out of the line of succession because he and his younger sister, Blanche, are mentally disabled. Since the death of his father in 2019, he has held the title of Count of Paris , Duke of France as Head of the House of France. These are birthright titles used under private law according to the historical house law of the formerly ruling French royal house of the Capetians , which are referred to by today's French courts as purely courtesy titles, but are also used as such, and also by politics and the press. The common salutation is Monseigneur .

Jean d'Orléans studied philosophy and law , including in California . He works in the banking sector in France. The respective Count of Paris is also the honorary president of the Fondation Saint-Louis family foundation , which manages the heritage and cultural assets of the House of Orléans, which includes the Amboise Castle , which is used as a family museum , the ancestral castle Bourbon-l'Archambault and the Dreux Castle residence with the Burial chapel belonging to the Orléans.

Jean d'Orléans wanted to marry Tatjana Duchess of Oldenburg (* 1974) in 2001 . The wedding was canceled at the last minute because his father feared that marrying a Protestant would weaken his son's claims to the throne. In March 2009, Jean d'Orléans married Philomena de Tornos, daughter of Don Alfonso de Tornos y Zubiría and Maria Antonia (Edle von) Steinhart. Her grandfather Juan de Tornos y Espelíus was the private secretary of Don Juan de Borbón y Battenberg , the father of King Juan Carlos .

He has five children with her:

As the French king, Jean d'Orléans would carry the name Jean IV (John IV). The proponents of his claim to the throne, the Orléanists , stand in contrast to the legitimists , whose claimant to the throne is Louis Alphonse de Bourbon .