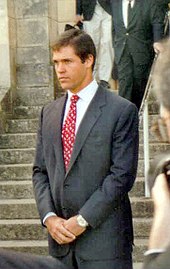 Louis Alphonse Gonzalve Victor Emmanuel Marc de Bourbon, duc d'Anjou - ( Spanish Luis Alfonso Gonzalo Víctor Manuel Marco de Borbón y Martínez-Bordiú, duque de Anjou ; born April 25, 1974 in Madrid ) is a Spanish prince, who is dynastically the oldest of the entire house is the Capetian . However, as a result of his grandfather and father's renunciation, he did not become King of Spain.

Since January 30, 1989 he has been claiming to be head of the "House of France" of the Bourbon dynasty , in competition with the French House of Orléans .

Louis is the second son of Alfons Duke of Anjou and Cádiz (1936-1989) and his wife María del Carmen Martínez-Bordiú y Franco, granddaughter of the Spanish dictator Francisco Franco . His parents' marriage was divorced in 1982 and church annulled in 1986. On February 7, 1984, his older brother, Francisco (* 1972), died in a car accident, and his father was killed in a skiing accident in Colorado on January 30, 1989 .

Since the death of his father in 1989, he has been regarded by some of the French monarchists as a pretender to the French throne; he takes on this theoretical dynastic role, contrary to the will of the Spanish king, with some self-confidence. King Juan Carlos I of Spain declared the Spanish title Duke of Cádiz , which Louis Alphonses father had received in 1972 from his grandfather-in-law, the dictator Franco, as not hereditary, which is why Louis Alphonse is not allowed to use it. Louis Alphonse, for his part, spoke out against moving Franco from his monumental mausoleum.

Louis Alphonse studied economics in Philadelphia at the University of Pennsylvania and worked for BNP Paribas in Madrid for several years , since 2005 for the Bank Banco Occidental de Descuento in Venezuela, later in New York and finally again in Madrid. In addition to Spanish, he also has French citizenship, as his paternal grandmother was French.

On November 6, 2004, Louis Alphonse married the Venezuelan María Margarita Vargas Santaella in La Romana . No member of the Spanish royal family took part in the wedding of the self-proclaimed "Duc d'Anjou". Their daughter Eugenia was born on March 5, 2007 in Miami , Florida . She was baptized on June 3, 2007. On May 28, 2010, twin sons Louis, Duke of Burgundy, and Alphonse, Duke of Berry, were born in New York, and Prince Henri, Duke of Touraine, was born on February 1, 2019.

Dispute over seniority in the "House of France"

After the death of Henri III. Jules de Bourbon, prince de Condé , in 1709 transferred the "Sun King", Louis XIV. , The rank of "first prince of the blood" - and thus the right to inheritance in the event of the extinction of his own French descendants - to his nephew Philippe II. Charles de Bourbon, duc d'Orléans (1674–1723) and his descendants. One of the king's grandchildren, the founder of the Spanish Bourbon-Anjou line , inherited the Spanish throne from the Habsburgs in 1700, but only on the condition that there was never a personal union with France; In 1713 this Spanish grandson, Philip V , declared an express renunciation of the throne for France in the Treaty of Utrecht , thus establishing the “House of Spain” of the Bourbons.

If the great grandson and successor of the Sun King, Louis XV. , died without a male heir from his line (and there was no such thing between 1713 and 1729), then Philippe II. d'Orléans, who took over the reign of the Child King according to the will of the Sun King, and subsequently his son Louis I. d'Orléans inherited the throne - unless the Spanish line had possibly revoked its renunciation and started (and won) a war of succession. To prevent this, the regent led the war of the Quadruple Alliance against Bourbon Spain from 1717-1720 .

But it was not until 1883, after several revolutions, republics, restorations and Bonaparte empires, that the French descendants of the Sun King died out of the direct royal line of the Bourbons with the childless Count of Chambord . The Legitimists recognize since the Bourbons of the line of Anjou (the Spanish Bourbons) as a pretender to the French throne. Since the founder of the Spanish Bourbons was a grandson of Louis XIV, but the Orléans line only descends from a brother of the Sun King, the Bourbon-Anjou are more closely related to the royal line of the Ancien Régime than the younger Bourbon line of the House of Orléans , which, however, occupied the throne in France with the "citizen king" Louis-Philippe I from 1830 to 1848. Louis-Philippe had only received this from Parliament because he had renounced a re-establishment of the absolute monarchy "by the grace of God" and accepted a constitutional monarchy and the other achievements of the French Revolution , symbolized by the tricolor , including the old royal line was never ready until its extinction in 1883. From 1886 to 1950, all Bourbons were banned from France.

From the standpoint of the legitimists, who adhere to the monarchy “by the grace of God” and reject the compromises of the “citizen-king”, the Bourbon-Anjou - viewed purely genealogically - take the place of the Bourbon-Orléans as the first princes of the blood ; consequently, they deserve the legitimate succession of the main line.

In their claims, however, the Legitimists ignore the provisions of the Treaty of Utrecht , which ended the War of the Spanish Succession in 1713 when the Duc d'Anjou and now King of Spain had renounced any claims to the French throne, as did the other European powers and which, secondly , corresponded to the testamentary condition of the last Spanish Habsburg, Charles II , who had bequeathed the Spanish crown to the Duc d'Anjou only on the condition that a personal union with France never came about .

In the opinion of the legitimists, however, this renunciation contradicts the succession regulation practiced since the Middle Ages within the house of the Capetians according to the pure principle of the firstborn and is therefore void. Louis Alphonse de Bourbon is, however, the first Bourbon Anjou to agree to resolutely take up this centuries-old rivalry and play the legitimist game, which his father and grandfather only half-heartedly did - perhaps because he was given the Spanish throne as a result of his father's resignation and Grandfather's escaped, perhaps only because he is flattered to be courted accordingly. Curiously, of all people, his cousin, King Juan Carlos I of Spain, with reference to the Treaty of Utrecht, supported the claims of the House of Orleans to the French throne and disapproved of the legitimist claims of Luis Alfonso, who, however, was genealogical senior within the Bourbon-Anjou line comes to. The two current pretenders to the throne of the House of Bourbon in the event of a re-establishment of the monarchy in France are therefore today Louis Alphonse de Bourbon for the Legitimists and Jean d'Orléans for the Orléanists .

The father of the current Orleanist leader, Henri d'Orléans , sued his Spanish cousin Louis Alphonse in French courts in 1988/89 to forbid him to use the lily coat of arms of the Bourbons without the tournament collar of a subordinate line (or the red border of the Spanish Bourbon- Coat of arms), because the pure lily coat of arms is the historical symbol for the "House of France" or its head. Thereupon, two instances successively declared that they were not responsible for the underlying dynastic dispute over the succession to the throne or the seniority within the "House of France" and that all lines of the Bourbons were allowed to carry this coat of arms.

Henri d'Orléans also had an article by the journalist Nicolas Kayanakis published on his website, according to which an ancestor of the Spanish Bourbons, Francisco de Paula de Borbón (1794–1865), was of extramarital origin, since his mother Maria Luise of Bourbon-Parma was hers Her husband, King Charles IV of Spain , was known to have cheated, making the entire line illegitimate by blood. Henri d'Orléans also took up the pen himself in a letter to the editor to the newspaper Le Figaro (in response to an article by journalist Stéphane Bern on April 24, 2014), the marital descent of King Alfonso XII. of Spain, and declared that none of today's Spanish Bourbons had a drop of the “Sang de France” (blood of France) except for King Juan Carlos I and his children, since his mother was a real Bourbon woman.

Louis Alphonse de Bourbon would be named Ludwig XX as king . wear. He currently claims the following titles as head of the House of Bourbon: