Coat of arms of Guigues IV of Albon; the crooked dolphin also appears in the coat of arms of Buis-les-Baronnies , which was annexed to the Dauphiné in the early 14th century.

The Counts of Albon had carried the title Dauphin von Viennois since the 12th century. It later became the French province of Dauphiné .

The County of Albon was created when the Archbishop of Vienne spun off two new fiefs from the County of Vienne , which he had received in 1023 - Maurienne in the north, from which Savoy developed, and Albon in the south, from which the Dauphiné arose.

Count Guigues IV of Albon († 1142) called himself Delfinus (French Dauphin ) and had the image of a hunched dolphin in his coat of arms . This nickname developed into a title among his descendants and the dolphin became an integral part of their coat of arms. This gave the county of Albon the name Dauphiné de Viennois ; later the entire domain of the Dauphins was called Dauphiné .

On July 16, 1349, the last Dauphin Humbert II transferred the Dauphiné to the French Crown Prince Charles, who later became King Charles V. Since the Dauphiné, as part of the Kingdom of Burgundy, was a fief of the Holy Roman Empire , the Dauphins' feudal position was developed the French royal family Valois as complicated. The land was bequeathed to Prince Karl, as neither his grandfather, King Philip VI. , nor his father, the then Crown Prince Johann , wanted to enter into a vassal relationship with the Roman-German Emperor. This problem arose when Prince Charles himself ascended the French royal throne in 1364. Usually, fiefs that belonged to the heir to the throne were united with the royal domain when he ascended to the throne , but this was forbidden with the Dauphiné, as this was a fiefdom of the emperor and not the French crown and therefore could not be connected to it.

In order to avoid feudal entanglements, Karl, like his father and grandfather, renounced the government in the Dauphiné when he ascended the throne and entrusted it to an agent appointed by him. The eldest son and presumptive heir to the throne of the king was appointed sovereign, who was also given power of government when he came of age. The Dauphiné thus left the Holy Roman Empire de facto, if not immediately de jure, as the emperors initially maintained their claim to sovereignty over the area.

This changed in 1457. The ruling Dauphin, Prince Ludwig , was in constant opposition to his father, King Charles VII , and with the Dauphiné had its own administratively and economically well-defined household power. In order to force his son into submission, King Charles VII withdrew the Dauphiné from him through its military occupation and forced their classes to pay homage to the French crown. The autonomous administration of the country was incorporated into the administrative order of France and thus effectively made a French crown land. Thus, not only the factual but also the legal annexation of the Dauphiné by France was carried out. On the part of Emperor Friedrich III. , the former overlord of the country, there was no objection to this act.

The ruler of the Dauphiné was the French king from then until the end of the monarchy. But due to the practice up to 1457 of handing this province over to the heir to the throne of France, it had prevailed until then to address the heir to the throne by the title Dauphin . This tradition was maintained even after the annexation of the Dauphiné, and the Crown Prince of France was called Dauphin de France until the end of the monarchy . 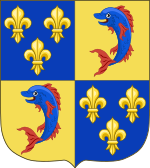 Annexation of the Dauphiné by the French crown in 1457. For the Dauphins de France see: List of Dauphins of France