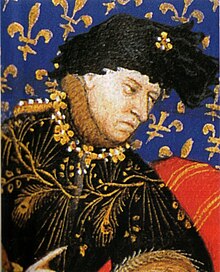 Charles VI in an illumination by the Boucicaut master 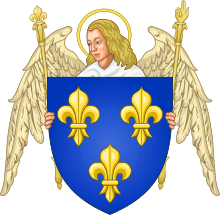 The royal coat of arms of Charles VI. 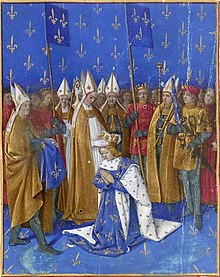 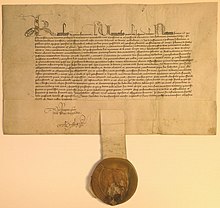 Charles VI was the eldest of the three surviving children (out of a total of nine) of King Charles V of France and his wife Johanna von Bourbon .

Since he was only eleven years old when he came to the throne in 1380, he was initially under the tutelage of his father's three younger brothers, the dukes Ludwig von Anjou , Johann von Berry and Philipp von Burgund , who served as the Regency Council ( government of the dukes ) also ruled for him.

On his accession to the throne, Charles inherited a country that was weakened by the great plague of 1349/50 and the Hundred Years War , which had flared up again and again since 1337 , but was successfully reorganized by his father and by his general Bertrand du Guesclin in many campaigns of the English Troops had been released. The rulers, on the other hand, pursued contradicting goals, mostly guided by their own advantage and profit. So France was badly governed by them and additionally exploited. This caused many uprisings, especially in Paris and other cities, which however could be suppressed. 1382 z. B. The rebellious citizens of Ghent , Bruges and Ypres were defeated in the then part of the Kingdom of France, the county of Flanders near Roosebeke .

It was not until 1388 that Karl officially took over the government himself. He proved to be good will, but weak and erratic. After all, he ruled with a happy hand for a few years because he relied on his father's advisers , known as the Marmousets . From 1392 at the latest, however, he was temporarily mentally disturbed and from 1393 (see: Bal des Ardents ) he was mostly incapable of acting, even if he was apparently clear-headed for a short while.

The ex-regents took advantage of this situation. H. the uncles of the king to manipulate him in their favor or to act behind his back. Little by little , Charles's ambitious younger brother, Duke Ludwig von Orléans , appeared as her rival, and he enjoyed the support of the young queen, Isabeau de Bavière .

Around 1400 two parties had formed at the court, which extended into the country: on the one hand, the "Orléanists" around Duke Ludwig and on the other hand the Bourguignons around Duke Philipp and, after his death in 1404, around his son Duke Johann Ohnefurcht . When in 1407 Ludwig was murdered in the street by Johanns murderers, his son Karl von Orléans allied himself with Ludwig von Anjou and his father-in-law, Count Bernard VII von Armagnac .

Since Johann was not brought to account for the murder despite all the efforts of the Orléans family, the Armagnacs and Bourguignons broke out into civil war in 1410 . Here the Armagnacs were victorious in 1413 and took control of Paris. Queen Isabeau, who had since collaborated with the Burgundian party, was expelled from the throne council.

France was divided by these internal political conflicts under a weak king. Henry V of England took advantage of this weakness in 1415 to begin new raids and conquests on French soil, during which his troops won the Battle of Azincourt , which was extremely costly for the French, in autumn 1415 and occupied Normandy in 1417.

In 1417 Bernard, now Konnetable of Paris, who had unlimited power in the Privy Council after the death of the two heirs to the throne Jean and Louis, the capture of his son-in-law Karl and the departure of Louis VII of Bavaria, banished the Queen and her court. Hundreds of citizens were driven out of Paris in their wake. Thereupon the queen allied herself with John of Burgundy, formed a counter-government in Troyes and in 1418 conquered Paris back. Bernard of Armagnac was executed. This was followed by a slaughter of the Armagnacs, from which the new (since 1417) Crown Prince ( Dauphin ) Karl was able to escape by fleeing to Bourges.

Charles VI dismissed the Armagnak authorities and approved the government formed by Isabeau in Troyes, which made the Duke of Burgundy governor and endowed with great power. The Dauphin, although lieutenant general of the king, remained under the influence of the Armagnacs, especially Anjou Yolantha of Aragon , his mother-in-law, who was allied with them , and could not be induced to return to Paris and take his place as heir to the throne in the Privy Council. In the meantime the English were on the verge of Paris, and many cities and regions were devastated. The split in the royal family worried many. Both Johann von Montfort , Duke of Brittany and son-in-law Charles VI. like his daughter Michelle de Valois , tried to persuade the Dauphin to return and reconcile with Burgundy in order to jointly defeat the English. After an unsuccessful attempt at Corbeil, the Dauphin met the Duke of Burgundy in 1419 on the bridge of Montereau. The heated exchange of words culminated in the murder of the Duke. It is historically not clear whether the Dauphin himself committed the murder or his entourage.

Charles VI Failure was not to act quickly enough to prevent Duke Philip the Good's successor from covenant with England. He described his son as immoral and unworthy of the succession to the throne.

1420 disinherited Charles VI. and Isabeau the Dauphin in favor of their daughter. Through the Treaty of Troyes , they married their daughter Catherine to Henry V of England and appointed him heir to the French throne of the United Kingdom of France and England.

When King Charles VI. died in autumn 1422, but was not followed by Heinrich V, who had died of dysentery in August, but by his one-year-old son Heinrich VI. At the same time, the Dauphin was proclaimed King Charles VII in Bourges, so that France had two kings for a while.

Charles VI was buried in the tomb of the French kings, the Basilica Saint-Denis . When the royal tombs of Saint-Denis were sacked during the French Revolution , his grave was opened and looted on October 17, 1793, and his remains were buried in a mass grave outside the church. 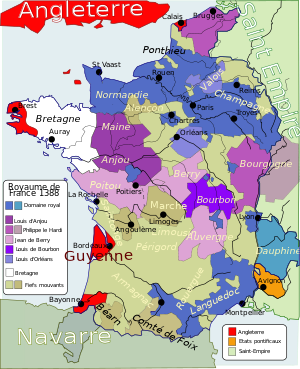 Distribution of the appanages under Charles VI. 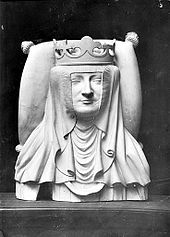 Bust of Isabella of Bavaria, partial plaster cast of her tomb in the cathedral of Saint-Denis

Charles VI was married to Elisabeth von Bayern-Ingolstadt (called Isabel) on July 17, 1385 . With her he had twelve children, eight of whom reached adulthood:

He also had the illegitimate daughter Marguerite (1407-1458) with Odette de Champdivers .