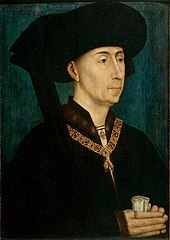 Duke Philip the Good, copy of a lost portrait by Rogier van der Weyden . Philipp wears the Collane (necklace) of the Order of the Golden Fleece . 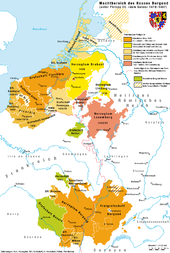 Philip the Good , Dutch Filips de Goede , French Philippe le Bon (born July 31, 1396 in Dijon , † June 15, 1467 in Bruges ), was Duke of Burgundy from the Burgundian sidelines of the house from September 10, 1419 until his death Valois , son of Duke Johann Ohnefurcht ( Jean sans peur ) and Margaret of Bavaria . Its historical significance lies primarily in the fact that under his rule he united various counties and duchies, from which the Netherlands, Belgium and Luxembourg later emerged.

Philipp grew up mainly in Ghent . The first title he received from his father in 1405 was the title of Count of Charolais as an apanage . Philip became Duke of Burgundy and Count of Flanders , Artois and Count Palatine of Burgundy in 1419 when his father John was murdered by the people of the Dauphin (see Civil War of the Armagnacs and Bourguignons ).

Out of hatred for the Dauphin, later Charles VII of France , he allied himself in the Treaty of Troyes of May 21, 1420 with Henry V of England against France in order to get revenge. When the Treaty of Arras was finally concluded on September 21, 1435 , Philip had Charles VII guarantee his complete independence from the French crown, as well as the counties of Auxerre , Mâcon , the Castellanei Bar-sur-Seine and all conquests in Picardy ( County Boulogne , County Ponthieu , southern part of County Vermandois and the Somme cities in the vicinity of Amiens ). In this way he achieved the possibility of an independent great power policy between France and the German Empire for his young state of Burgundy. By inheritance from Philip of Brabant from the Burgundy-Brabant sidelines, Philip the Good had already become Duke of Brabant and Limburg in 1430. 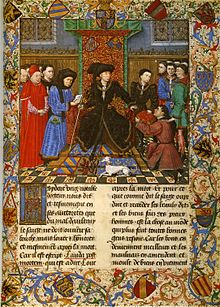 Philipp receives a book. Representation in a magnificent manuscript made for him in 1447/1450. Vienna, Austrian National Library , Cod. 2549, fol. 6r

In 1421 he bought the county of Namur . In 1433 in the Hague Treaty he wrested the counties of Holland , Zeeland , Friesland and Hainaut from his cousin Jakobäa von Bayern , whose heir he had already become in 1428 in the Delft Treaty of Reconciliation . He proceeded similarly with Elisabeth von Görlitz , who held the Duchy of Luxembourg as pledge . In 1442 she was forced to appoint Philip as her sole heir due to lack of money, who occupied the duchy the following year and asserted it against the competing claims of the heirs from the House of Luxembourg. With that he penetrated deep into the territory of the Holy Roman Empire , which triggered the violent and helpless protest of Emperor Sigismund . Together with the Duchy of Burgundy , the Free County of Burgundy and the County of Flanders , which he had inherited, Philip formed a territory of areas on both sides of the border between Germany and France, which belonged to the kingdom of the eldest son of Emperor Louis the Pious, Lothar I. , remembered. He also succeeded in bringing the principalities of Cambrai and Utrecht under his indirect control by enforcing the election of bishops from his family.

Philip favored the arts and sciences and promoted trade and commerce, especially carpet weaving in Flanders . His reign marked a period of unprecedented cultural prosperity, so he employed the painter Jan van Eyck as court painter and also sent him on a diplomatic mission to Portugal. He used many works of art - such as paintings and tapestries - as political propaganda instruments and traveled with them to old age in order to consolidate his rule and to show himself.

See also : Book of Hours of Philip the Good, Duke of Burgundy

In 1453 Philip accepts the submission of the citizens of Ghent. Illumination in a manuscript made for the Duke. Vienna, Austrian National Library, Cod. 2583, fol. 349v

On 10 January 1430 he founded along the lines of the English Order of the Garter , the adoption of which he had refused the Order of the Golden Fleece was, which was intended as a unifying bond for the elite of his very heterogeneous territory and defend Christian values worldwide. In his final years Philip left the government entirely to his ambitious son and future successor, Karl .

Philip's de facto independent country complex between France and Germany became in its northern part the forerunner of the Netherlands (from which the present-day states Netherlands , Belgium and Luxembourg later emerged). Philip's detachment from France and his withdrawal from French domestic politics did not happen without hesitation and hesitation, as he considered himself Prince du sang ( Prince of French royal blood ) throughout his life . Only his son Charles the Bold was to feel completely head of an independent empire, which he, however, endangered through his reckless policy and which was again divided between France and Habsburg when he died on the battlefield in 1477 .

Philip had been married to Michelle , daughter of the French King Charles VI, in his first marriage since 1409 . After the death of his first wife in 1422, Philip married Bonne d'Artois , daughter of Count Philip von Artois, in 1424 . She was also the widow of his uncle, Count Philip of Burgundy-Nevers . In 1430 Philip married Isabel de Portugal , a third marriage , with whom he finally got the desired successor, Charles the Bold . Philip had three legitimate children and nine known illegitimate children; his only surviving, legitimate, male descendant was Charles the Bold.

In addition to his three wives, Philip was associated with several other women, such as Jeanne de Presle de Lizy , Jeanne Chastellain , known as de Bosquiel, Lady of Quéry la Motte († 1462) and Marie de Belleval .

only with Isabel de Portugal:

Coat of arms of Philip the Good from 1430 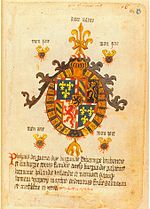 Philip III led as a badge flint and steel. The motto of his third wife, Aultre naray ('I don't want anyone else') can be found on several pages in the Book of Hours of Philip the Good .