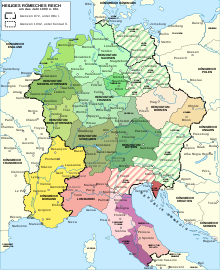 Lower Lorraine in the Holy Roman Empire around 1000

The boundaries and dimensions were initially based on the Lotharingia territory , which was essentially defined in the Treaty of Verdun (843) . The Duchy of Lorraine was divided in 959 into two duchies (Lower Lorraine and Upper Lorraine ), between which the boundary line was very indistinct, but still little discussed.

In the years 965–977, no duke has survived, which allows the conclusion that the Ottonians had completed the incorporation of the duchy into their power complex. In the years 977–1005, two West Franconian Carolingians held the ducal office, and this was followed by another vacancy on the ducal throne (1005–1012).

Since the early 11th century , partial principalities broke away from the duchy and a series of armed conflicts emerged in the western part of the empire. The German king responded by creating three margraviates ( Antwerp , Ename and Valenciennes ) to protect the border with France and to control the important land between the Rhine and the Scheldt. In addition, the local dioceses of Cologne , Utrecht , Liège and Cambrai were appointed ecclesiastical principalities of the empire, whose overlords were in fact appointed by the emperor. In 1012 Lower Lorraine was given a duke again, who finally held together and secured the areas that were dissolved.

In the 11th century, the family of the Counts of Verdun , the Ardenne dynasty , held the ducal office. During this period, the ducal crown was not inherited and different families were observed around the Lower Lorraine throne.

In the 12th century the duchy fell into disrepair. After the death of Gottfried von Bouillon († 1100), the office of Duke in Lower Lorraine lost its importance and also suffered from the dispute between King Henry IV and his son Heinrich V. Henry IV raised the Count of Limburg to Duke of Lower Lorraine, while Henry V stood up for Gottfried von Löwen, Landgrave of Brabant . At the expense of imperial politics, both pursued their own interests in the area of ​​their new duchy.

After the death of Gottfried III. von Löwen († 1190) created Heinrich VI. a radical reorganization. At the Hoftag zu Schwäbisch Hall (September 24, 1190) he drew up the “death certificate” of the duchy by confirming to Heinrich I of Brabant , son of the deceased Gottfried and since 1183/1184 actually Duke of Brabant , that all of Lower Lorraine had to him was no longer allowed. The ducal dignity of Lower Lorraine became a mere title without any territorial claims to power, which the dukes of Brabant carried until they became part of the Burgundian state as the “Duc de Lothier”.

Since the Dukes of Lorraine often ruled differently, the method of counting can vary

Dukes of Brabant and Lower Lorraine