The title of this article is ambiguous. Further meanings are listed under Valenciennes (disambiguation) .

Valenciennes [ valɑsjɛn ] ( Dutch : Valencijn ) is a French town in Nord in the region of Hauts-de-France . The city was probably founded by the Merovingians , but it may be a Roman city ​​foundation ( Valentiana ). The university city is an economic center in northern France and the former capital of the northern French steel region .

The Scheldt at the Pont Jacob bridge

Valenciennes is located on the Scheldt , or Escaut in French , which separates the historic city center from the districts to the west. The city has 43,336 inhabitants (as of January 1, 2017), plus around 300,000 inhabitants in the surrounding catchment area. It is connected to the Scarpe-Schelde Regional Nature Park ( Parc naturel régional Scarpe-Escaut ) to the north . This is also where the river Rhonelle flows , which drains into the Scheldt from the city center through a drainage canal that runs partially underground.

Valenciennes is the center of an industrial area. With the neighboring municipalities, it is part of the Valenciennes Métropole , which has over 350,000 inhabitants. 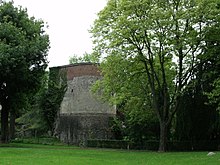 In the year 693 Valenciennes was for the first time in a document of the Frankish king Clovis III. mentioned. With the Treaty of Verdun , the city became a neutral border town between western and eastern France . In 881 Hainaut was invaded by the Normans , in 923 Valenciennes came to the Duchy of Lorraine . With this it later became part of the Holy Roman Empire and the seat of a margrave . In 1006 the march and city were conquered by the Count of Flanders, Baldwin IV. In 1015, Henry II received it as a fief. In 1008, after the call of the Virgin Mary , the place was miraculously spared from a plague epidemic . Since then, the “Tour du Saint-Cordon” procession has been celebrated at the same time every year.

From 1070 the Valenciennes mark belonged to the county of Hainaut and the city became its residence . It lost its residence status to Mons . In 1285, the currency of Hainaut was replaced by the French Écu . In the 14th century, the Bavarian Duke Albrecht II had the Tour de la Dodenne fortified tower built. In 1433 Valenciennes fell with Hainaut, which lost its independence, to the Burgundian Netherlands , later with them to the House of Habsburg and finally to Spain .

The Habsburg Charles V ruled the city from 1524. Against him in 1552 the French King Henry II allied himself with the Protestants . After the collection of Beggars gathered in 1566 the Spanish King Philip II. From the Habsburg dynasty his troops in a fortress at the Porte d'Anzin. The building called La Redoute was besieged by the Valencians in 1576, but the end of Spanish rule was not reached.

Around 1560 the city became a center of Calvinism , but the Counter Reformation soon took hold . In 1591 the Jesuits founded a school and soon after had the Saint-Nicolas church built. In 1611 the facade of the town hall was built in the Renaissance style . In the 17th century the Scheldt was canalized between Valenciennes and Cambrai , from which the textile industry profited.

On March 17, 1677, the city surrendered after the siege by the troops of the French King Louis XIV under his military leader François-Henri de Montmorency-Luxembourg . After the Dutch War , Valenciennes fell to France under the Treaty of Nijmegen in 1678 . Sébastien Le Prestre de Vauban expanded the city into one of the most important fortifications in northern France.

The city's economic situation deteriorated until the first coal deposits were discovered . A first shaft was sunk in nearby Fresnes-sur-Escaut in 1718 , and from 1734 fat coal was mined in Anzin . At that time, women began to make the now famous Dentelle de Valenciennes bobbin lace , and the porcelain industry also flourished. Due to its artistic charisma, Valenciennes was also known as the “Athens of the North”.

In July 1793, Valenciennes was captured, occupied and devastated by British-Austrian troops, opponents of the French Revolution . It was not until August of the following year that the city could be recaptured by the revolutionaries. In October 1794, the Ursulines of Valenciennes with their superior Marie-Clotilde were condemned by a revolutionary tribunal by St. Francis Borja (Marie-Clotilde Paillot) in Valenciennes with three other nuns who had accepted them into their community for their loyalty to their faith and on the scaffold executed. Pope Benedict XV beatified the martyrs of Valenciennes in 1920 . 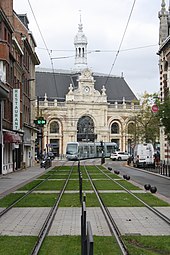 Tram in front of the station building

After the fall of Napoleon Bonaparte , the city surrendered to the power of the Bourbons in 1815 . The coal industry and sugar refineries experienced an upswing. In 1824, Valencienes became a sub-prefecture and, thanks to the coal deposits, a center of the steel industry in the 19th century . On April 7, 1843, the belfry , a tall bell tower next to the town hall, which had symbolized the rights and privileges of the citizens since 1247 , collapsed during repair work . The fortifications were demolished between 1891 and 1893 as the city was no longer considered to be at risk of war.

During the First World War , Valenciennes was occupied by the German army . After heavy fighting, British and Canadian troops were able to liberate the city in 1918.

In memory of the destruction, privation and humiliation of the First World War, the population left Valenciennes in the spring of 1940 in the face of the advancing Wehrmacht . On May 10, 1940, the German air force bombed the city, the center of which was set on fire by looters on the night of May 21 to 22 and destroyed by a fire lasting two weeks. The town hall also went up in flames, only the facade remained. The German soldiers invaded on May 27th and occupied Valenciennes again. This time the United States Army was liberated on September 2, 1944 .

The economic crisis of the 1970s was accompanied by the decline of the steel, chamotte , textile and food industries. What has remained is the construction of automobiles , rail vehicles and pipes.

Description : In red, a blue armored and tongued golden lion .

The metalworking and automotive industries are of particular importance for the region . A joint venture between PSA and Toyota produces the Citroën Jumpy , Citroën Spacetourer , Peugeot Expert , Peugeot Traveler and Toyota Proace models there . PSA also has a gearbox manufacturing facility and Toyota manufactures the Toyota Yaris nearby . Bombardier Transportation and Alstom have factories in Valenciennes.

Since 2005 the offices of the European Railway Agency (ERA) have been in Valenciennes.

Steam tram on the Pont Jacob bridge over the Scheldt, around 1905

Valenciennes is on the A 2 (towards Paris and Mons ) and A 23 (towards Lille ) motorways .

Valenciennes station is a railway junction where the main lines from Fives to Hirson and Douai to Blanc-Misseron meet, and the line to Lourches begins there . All routes are electrified. The station building dates from 1909, the station concourse was destroyed by bombs in 1918. The station was badly destroyed in the Second World War and rebuilt in the post-war years. The depot was given up with the end of steam traction and demolished in 1979.

In 1881 steam trams began to develop the town, which had around 30,000 inhabitants at the time, and its surroundings . In 1914 the first electric railcars operated , and between 1918 and 1923 the network, which had been badly damaged in the First World War, was restored. After the destruction of World War II and due to competition from automobile traffic, the tram was shut down in October 1966.

Since July 2006 Valenciennes has - after 40 years of interruption - again a modern tram system , which significantly upgraded local public transport and made it more attractive. A local transport system was created, which in the planned final expansion will have a rail network of 34 kilometers with four lines and will connect the surrounding communities to the core city.

The Université polytechnique des Hauts-de-France (UPHF) was founded in 1968; until 2018 it was called Université de Valenciennes . It has five campuses in Famars and Valenciennes and facilities in Cambrai and Maubeuge . Since 2002, the University of Valenciennes has had the École nationale supérieure d'ingénieurs en informatique, automatique, mécanique, énergétique et électronique (ENSIAME), which emerged from the merger of three engineering schools in the city.

In 1687 the Académie de Musique was founded, from which in 1884 the Conservatoire national de musique Eugène Bozza emerged.

Founded in 1801, the Musée des Beaux-Arts exhibits works by French and Flemish painters and sculptors .

Valenciennes' sporting flagship is the Valenciennes Football Club . The men's first team will play their games in the Stade du Hainaut , which opened in 2011 and is one of nine stadiums for the 2019 women's soccer World Cup . 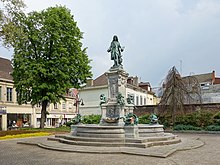 Communes in the arrondissement of Valenciennes