The town hall from 1477 on the Grand Place

Mons ( Dutch and German : Bergen ) is the capital of the Walloon province of Hainaut in Belgium . The majority francophone city is since 31 March 1967 headquarters of the Military Headquarters of NATO , SHAPE .

In 2015, Mons was European Capital of Culture with the Czech city of Pilsen .

The name of the city means mountain in Latin (compare French: Mont ), which indicates the geographic situation of the city.

The relief of Mons is shaped by the valley of the groves (Eng .: hen). This flows north of the city center from east to west and flows into the Scheldt about 30 km further west in France . South of the city center, the Trouille flows west, only to flow into the groves a little later in the Mons district of Jemappes. To the north and south of the groves there are hills and plateaus, the height of which gradually increases to up to 50 to 115 meters. The valley floor near the river and the Nimy-Blaton-Péronnes canal that branches off from it is 20 meters above sea level.

Over the centuries, the city developed almost in a circle on the hill between the Haine in the north and the Trouille in the south. The Little Ring of Mons (Belgian ring road R50) separates the city center from the suburbs. Towards the middle of the circle described by the R50, the hill rises and reaches its highest point near the historic belfry (bell tower).

Archaeological excavations in the nearby fire quarries of Spiennes that on the list of World Cultural and Natural Heritage of Humanity of UNESCO are, have shown that the area of Mons already during the Neolithic and the Iron Age was inhabited.

Mons owes its origins to a fort which Caesar built here during the war against the Gauls (on the site of the current belfry). In Roman times Mons was a military camp on the road from Bavay to Utrecht .

Mons was built around a monastery founded in the early Middle Ages by Saint Waltraud von Mons, a member of the Merovingian royal family, and it became a handsome place. Since such a settlement was hardly protected from attacks, the Count of Hainaut had a castle built on top of a hill. In the 12th century a 1 km long defensive wall was built. The city grew and the place began to expand down the hill and a new larger city ​​wall was built.

During the Dutch War of Liberation , the city was captured by Prince Ludwig von Nassau in 1572 , but was recaptured by the Spaniards that same year (September 6, 1572) and defended against both Coligny and the Prince of Orange. After a blockade by the French marshal Louis de Crévant, duc d'Humières in 1677, the city was handed over to the French on April 8, 1691 after a siege led by Vauban . In the Treaty of Rijswijk , Mons was returned to Spain in 1697. In the War of the Spanish Succession (1701–1714), Mons fell into the hands of the French again. But it came about after theBattle of Malplaquet and a siege of several weeks in October 1709 the Allies (Great Britain, Netherlands, Prussia and others) and was occupied by the Dutch as one of the barrier places after the Peace of Utrecht in 1713 . The city was taken again on July 10, 1746 by the French under Conti , but soon afterwards it returned to Austria. In 1792, it was after the battle at today Monser district Jemappes by troops of the Republic of France occupied. The occupiers razed the fortifications; In 1797 what is now Belgium came to France(which was now ruled by Napoleon). In 1814, troops of the anti-Napoleonic coalition occupied Belgium (more here ). In 1818 the fortifications were restored and reinforced; later they were removed again.

During the different dynastic affiliations of Hainaut or foreign occupations ( Burgundy , Spain , Austria , France , the Netherlands ), the military installations were reinforced and modernized several times. Over time, the city limits shifted more and more, new suburbs emerged and 18 neighboring villages were added to today's urban area.

In 1887, Bergen had 25,421 inhabitants. They worked in sugar, soap, tobacco, lace, faience and clay pipe factories, wool and cotton mills, breweries, iron foundries and especially in coal mining . Mons is located in the middle of the northern French coal field . This then significant coal deposit is now largely exhausted. 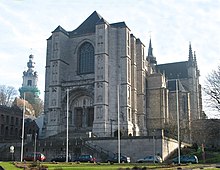 On August 23 and 24, 1914, the first battle of the British Army of the First World War took place near Mons . The city was occupied by the German army and taken over by Canadian troops in 1918.

In May 1940, the city was occupied by advancing Wehrmacht troops as part of the western campaign . The Wehrmacht occupied northern France until autumn 1944; then advancing Western Allied forces forced them to retreat. On September 2, 1944, there was a boiler battle near Mons ; Over 25,000 German soldiers were taken prisoners of war. On September 3rd, Mons was liberated by soldiers of the 3rd Armored Division .

Every year on the Sunday after Pentecost, the Ducasse de Mons (popularly Doudou ), a traditional folk festival, takes place. It consists of the procession Procession de la Trinité and the processional game Lumeçon , which shows the fight of St. George with the dragon. The processional game, along with similar games in Belgium and France, was included in UNESCO's list of Masterpieces of the Oral and Intangible Heritage of Humanity in 2005.

The film festival of love films , the Festival International du Film d'Amour , which has taken place here every year since 1985 , should also be mentioned.

Born or raised in or near Mons