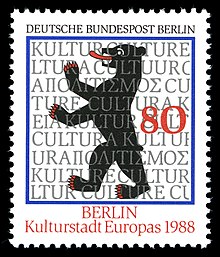 The European Capital of Culture (1985-1999 European City of Culture ) is a title of the year by the European Union is awarded (since 2004 at least two cities). The designation is intended to help highlight the richness, diversity and similarities of cultural heritage in Europe and to enable a better understanding of the citizens of Europe for one another.

The ministers responsible for cultural issues, united in the Council of the European Community , passed a resolution on 13 June 1985 on the proposal of the then Greek Minister of Culture, Melina Mercouri , for the annual designation of a “European City of Culture”. This event, for which Community funding was available, was intended to make specific cultural aspects of the city, region or country accessible to the European public .

The title has been awarded continuously for one year since 1985. In the corresponding year, numerous cultural events take place in the “capitals of culture”. The cities hope that this title will attract increased attention and numerous visitors for a year.

With the act 649/2005 / EG the European Parliament and the Council established a list with the order of the member states. In order to involve the new EU members who joined the EU in 2004 and 2007 as quickly as possible in the campaign, two Capitals of Culture have been appointed since 2009, one from the old member states and one from the new. This procedure was in effect until 2019, the year in which the previous action expired, and for those Member States that were entitled to propose cities for the title of European Capital of Culture until 2019.

For the years 2020 to 2033, however, the procedure specified in Decision No. 445/2014 / EU applies , which both modified the selection criteria and adapted the award procedure and established a new list with the order of the member states. According to this list, Austrian cities (together with an Estonian city) and in 2025 a German city (together with a Slovenian city) are entitled to bear the title of European Capital of Culture in 2024 and 2033 .

With a lead time of six years, the respective member state ushers in a national selection procedure. An independent European jury of experts assesses the applications in a pre-selection process in the following year. The jury is made up of ten international experts as well as two other national experts who are consulted for the application process in the respective member state. The experts must have extensive experience in the field of culture, urban development and / or in the implementation of large-scale cultural events. The jury creates a pre-selection list from the total number of applications. The applicant cities named in the shortlist can then supplement and revise their applications based on the jury recommendations. After a second and final selection round, the jury recommends a city for nomination as the Capital of Culture. The respective Member State then appoints the Capital of Culture based on the recommendations of the selection report of the jury. The jury's recommendations are not formally binding; In practice, however, they have so far been followed without exception.

In the context of the United Kingdom's exit from the EU, the EU Commission declared in November 2017 that third countries are not allowed to participate. Exceptions would only be possible for EU accession candidates and members of the European Free Trade Association or the European Economic Area .