Bodo [ bu: dɛ ] (trad.) Or [ bu: dø ] (. Liter), Lule Bådåddjo , capital of the province of Nordland in northern Norway and seat of the municipality Bodo.

It is located in the Salten region north of the Arctic Circle . In 1968 Bodin and Bodø merged to form a municipality. On January 1, 2005, the former independent municipality Skjerstad was joined to Bodø. In 2016 Bodø was named the most attractive city in Norway with the award for sustainable urban development awarded by the Norwegian Ministry of Local and Regional Development. In 2024 Bodø will be one of the three European Capitals of Culture alongside the Austrian city ​​of Bad Ischl and the Estonian city ​​of Tartu .

The city was founded on the site, at which time the trading post was Hundholmen. The aim of the foundation was to develop the city instead of Bergen as a trading center for the northern Norwegian fishermen including a trade monopoly and thus to relativize the influence of the Danes (under whose rule Norway was). Bodø prevailed against Vågan and Brønnøy . The founding of the city was delayed by the coalition wars and the associated separation of Norway from Denmark. In 1816, amid strong protests from Bergen, the Storting decided to grant city ​​rights with 60 to 5 votes based on a proposal by Bishop Mathias Bonsach Krogh . On May 20, 1816, King Charles II confirmed this decision.

In 1818 the so-called Bodø Affair came about, a diplomatic conflict between the dual monarchy Sweden-Norway and Great Britain . The cause was the confiscation of various goods (including syrup, tobacco and rum), which the British trading company Everth & Son intended to export duty-free via Bodø to Norway. One of the company's owners, John Everth, was also arrested and interrogated. The Ministry of Foreign Affairs in Sweden at the time, responsible for the Union's external relations, was remarkably lenient with Everth and paid the company compensation in 1821. The conflict damaged the Norwegian trust in the alliance with Sweden and was the subject of the Storting several times until 1829.

Bodø remained relatively insignificant until the 1850s. A census in 1855 showed 255 inhabitants. Bodø experienced strong growth between 1865 and 1885 when large schools of herring came to the coastal region and were caught. In the 1870s it was considered one of the fastest growing places in Norway. In the summer of 1889, Emperor Wilhelm II visited Norway and Bodø with the Hohenzollern , which gave tourism there (and in Lofoten ) a significant boost. The Keiservarden mountain plateau bears this name in his honor. With the construction of the pier and the jetty in 1904, passenger and freight traffic developed, also due to the ships of the Hurtigruten, founded in 1893, which have been docking there since then . At the turn of the century Bodø was the third largest city in Northern Norway after Tromsø and Narvik . In 1900 the population was around 6,000. The city's growth slowed and stabilized between 1900 and 1940.

During the German invasion of Norway and Denmark in World War II , Bodø was attacked by the German Air Force on May 27, 1940 and almost completely destroyed. Therefore, Bodø has only a few historical sights today. Bodø was the Norwegian city that was most destroyed in World War II. The majority of the residents were housed in emergency barracks and homeless shelters until the end of the Second World War. 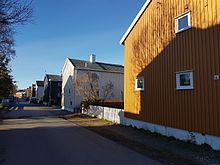 After the city was rebuilt, a completely different cityscape emerged, which is characterized by a sober and functional style, both in terms of urban planning and architecture. In the western part of the city, a large number of identical detached houses were built in 1941 with the help of the Swedish Red Cross , which today form the so-called Svenskebyen ("Sweden City ").

In 1952 Bodø became a bishopric. In 1957 the cathedral church and in 1959 the town hall were inaugurated. In 1961 Bodø was connected to the Nordlandbahn railway line . During the Cold War , the city was integrated into NATO's military strategy as an air base and the seat of the NATO headquarters of the Allied Forces Northern Norway and was subordinate to the Allied Forces Northern Europe (AFNORTH) regional command with headquarters in Kolsås . The city came into the focus of international politics when on May 1, 1960 the pilot Francis Gary Powers was shot down in the American spy plane U-2 on the flight to Bodø over the Soviet Union .

The two hundredth city anniversary in 2016 was accompanied by an extensive cultural program. Two major infrastructure projects are currently underway (2017): the construction of a 2.8 km long four-lane road tunnel in an east-west direction as well as numerous associated expansion and renovation measures as well as the renovation and expansion of Bodø Airport, which was decided by Storting in March 2017 . At the same time, numerous apartments are being built to relieve the strained housing market.

In autumn 2018 Bodø applied under the title "ARTICULATION" (arctic, art, culture and communication) to the European Commission for the first step of qualification for European Capital of Culture 2024. In September 2019, the decision was made in favor of Bodø, although Norway is not a member of European Union is. Cities outside the EU are admitted after a certain time lag. In addition, Tartu (Estonia) and the Austrian municipality of Bad Ischl will be cultural capitals in 2024. With Bodø, a city north of the Arctic Circle will be the cultural capital for the first time.

The blazon of the Bodø coat of arms reads: In red a faceless golden sun with twelve rays. The city coat of arms was first granted in 1889, the current version dates back to July 24, 1959. The sun represents the midnight sun visible in Bodø in summer. The first version of the coat of arms still contained a reference to shipping and fishing, which are important for Bodø.

For some years now, tourism in Bodø has steadily gained in importance. The northbound Hurtigruten ships dock in Bodø at 12 noon every day for three hours, which allows ship travelers to explore the city center. There is a tourist information center in the city center with information in Norwegian, English and German. The repeated mention of Bodø in the Lonely Planet travel guides has been enthusiastically received. 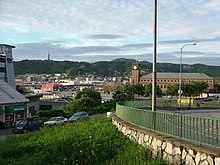 Hurtigruten ships call at Bodø daily in both directions and also has daily car ferry connections to the islands of Røst and Værøy and to Moskenes in Lofoten . There is a well-developed network of routes for shipping to the islands off the city. Bodø is an end point of the Nordland Railway to Trondheim (day and night trains, travel time approx. 9.5 or 10 hours) with a connection to Oslo and thus the northernmost train station of the Norges Statsbaner railway lines starting in southern Norway . Destinations further north can be reached by long-distance buses . The bus station is in the immediate vicinity of the offshoot of the speedboat ferries (hurtigbåt) to Helgeland (NEX I) or Svolvær (NEX II) in the city center.

Bodø Airport , which was established in 1951 and is also close to the center, has over 1.7 million civilian passengers a year and also serves as a base for the Norwegian Air Force . The airlines SAS , Norwegian , Widerøe and FlyViking fly to almost all major cities in Norway every day. There are also direct flights to Stockholm and, in summer, to popular tourist destinations such as Mallorca and Gran Canaria .

Because of its location at the tip of a peninsula, the road connection is mainly via road no. 80, which connects Bodø with Kystriksveien to the south and with the E 6 in Fauske .

The daily newspaper Avisa Nordland (created in 2002 from Nordlandsposten and Nordlands Framtid ) and the media company Bodø Nu (founded in 2001) are based in Bodø. The Norwegian broadcaster NRK also has a district office (NRK Nordland) in Bodø.

The town hall in Bodø before the renovation (2015) 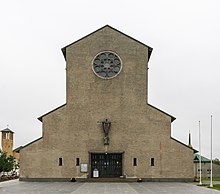 Burøya peninsula with Nyholmen ski jump at the highest point (2015) 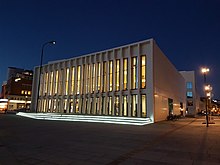 In addition, the Nordland Music Festival , a music festival with a classical profile, takes place every summer . The Parken Festival , which takes place annually in August and includes well-known artists in the lineup , is also very popular (2017: including Kygo , Seeb, Franz Ferdinand , 2018: including Zara Larsson , Turbonegro , A-HA , Alan Walker ).

The city-based football club FK Bodø / Glimt , each three-time cup winner and runner-up in Norway, has been playing in the first Norwegian league, the Elite Series , since the 2017 season . The women's soccer team of the Idrettsklubben Grand Bodø will play in the third division, the 2 divisjon, in 2020.

The men's handball team of Bodø Håndballklubben (BHK) relegated to the third division (2nd divisjon) in 2020.

There are also other handball and soccer teams that are represented in the lower leagues. In addition, some successful winter sports enthusiasts come from Bodø or live there (see below).

Municipalities of the Fylke Nordland