Long distance bus is a form of public long-distance transport, with buses in scheduled services connecting regions over greater distances with each other. Destinations from Germany or Central Europe are especially cities or tourist centers in Eastern, Southern and South-Eastern European countries. The buses usually serve several cities in the starting and destination regions - they collect and distribute passengers to different locations. If possible, expressways and motorways are used . Inner German long-distance bus lines usually connect large cities with each other or with airports or tourist areas.

As long-distance buses, coaches are used, which in many countries are equipped to cope with long travel distances. Double-decker buses offer space for more passengers and more spacious comfort facilities (cloakroom, minibar ). Long-distance buses in the “western world” usually have seats with adjustable backrests, air conditioning and on- board toilets with wash basins. In some countries in South America, Asia and Africa it is almost standard that luggage is transported on the roof.

Long-distance buses were very important in Germany in the decades after the Second World War. At that time, the Deutsche Bundesbahn ( rail bus ) and the Deutsche Bundespost ( Kraftpost ) operated numerous bus routes that connected large cities and metropolitan areas. On many routes, the bus routes were an inexpensive alternative to the railroad, which was faster and more comfortable, but also more expensive. With increasing social prosperity and the increasing spread of the automobile, the need for this mode of transport decreased considerably; most of these lines were discontinued in the 1970s and 1980s.

According to the Passenger Transport Act (PBefG) valid until December 31, 2012, new long-distance bus routes were only allowed to be set up if they did not compete with the railways or existing bus routes. Since Germany - in contrast to many other European countries - has a well-developed railway network to which all large cities and metropolitan areas are connected, domestic transport with long-distance buses was much less important in Germany than in many other countries. The federal government in office since 2009 , however, provided in its coalition agreement to allow long-distance bus transport and to change Section 13 PBefG. In April 2010, the Federal Administrative Court (BVerwG) ruled with judgment of June 26, 2010, Az. 3 C 14.09, (see press release of BVerwG No. 56/2010) on § 13 Abs. 2 PBefG that - contrary to decades of practice - already a clear price advantage for a bus connection in comparison to existing rail connections can represent a "substantial improvement" within the meaning of Section 13 (2) PBefG. On August 3, 2011, the Federal Cabinet decided to change the PBefG and thus enable long-distance bus routes to be largely approved. On September 14, 2012, the parliamentary groups of the CDU / CSU, the SPD, the FDP and Bündnis90 / Die Grünen agreed to introduce a joint amendment to the government draft in the Bundestag and to discuss it in autumn 2012; The Federal Council approved the amended draft law on November 2, 2012, so that the law came into force on January 1, 2013. Since January 1, 2013, long-distance bus routes have in principle been permitted again in Germany, even if long-distance rail routes exist in parallel. Only in the area of transport, the primacy of rail transport will remain as long distances through the local rail are served within an hour or not are km between stops to be operated by the remote bus more than 50th In such cases, bans on en route will continue to be imposed as part of the line permit.

According to the Federal Ministry of Transport, the range of services has more than tripled within a year since the amendment of the PBefG and newly established long-distance bus companies such as DeinBus , Flixbus , MeinFernbus and Postbus offer daily scheduled services to neighboring countries. Since the opening of the market, there has been a consolidation of the market and Flixbus (product of the merger of Meinfernbus and Flixbus in 2015) has taken over the German business of Megabus and Postbus , among others . In July 2017, Flixbus had a market share of 93% in Germany and thus has a monopoly in Germany.

An exception was made before the amendment in Berlin traffic. At the time of the division of Germany - because of the small number of train connections - a long-distance bus network was created that connected Berlin with Hamburg and several other German cities. After reunification, it was permitted by way of exception until a general statutory federal regulation.

In July 2015, there was a broad demand that travel and long-distance buses that are allowed to weigh up to 18 t should also be subject to a road user charge if, in addition to cars, trucks with a total weight of 7.5 t and above are tolled from October 2015.

Ouibus long-distance buses in front of the Paris-Bercy train station .

The liberalization of long-distance buses has been in force in France since August 2015. This means that national long-distance bus routes can be operated on routes over 100 km (for shorter routes, an exemption from the regulatory authority ARAFER is required). Right from the start there was tough competition in the market with Eurolines / Isilines ( launched by Transdev ), Alsa , Ouibus (originally launched as IDBus by SNCF ) and Flixbus . Unprofitable operators withdrew on a train-by-train basis, for example in 2018 the SNCF handed Ouibus to the ridesharing operator BlaBlaCar and in 2019 Transdev Isilines to Flixbus. At the beginning of 2019, only Flixbus and BlablaCar remained in the market as competitors.

Almost all long-distance bus routes in Greece are operated by the KTEL association.

Since the rail network in Ireland only connects the largest cities with Dublin in a fan-shaped manner, the dense and inexpensive bus network is often a better choice. The main operators in the country are the state-owned Bus Éireann and CityLink . Bus services between Dublin and Belfast are provided by a bus service operated by Irish Bus Éireann and Northern Irish Ulsterbus, which runs every hour around the clock.

Due to the poorly developed rail network and the small size of the country and the resulting low internal air traffic , the long-distance bus routes of the Egged cooperative are the most important public transport connection in the country. Because of the close-knit network, Egged is one of the largest bus companies in the world, not least because of the long-distance bus routes. More recently, however, some bus routes have been re-awarded and thus competitors from Egged have come into play. Furthermore, the Israeli railway is in an ambitious expansion and modernization program. Nevertheless, Egged is and will remain the most important long-distance public transport provider in the country. 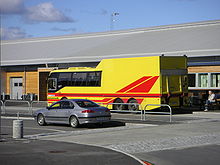 Norway is a classic long-distance bus route country: barely inhabited areas, many mountains impaired the construction of a comprehensive railway network: except in the greater Oslo area , Norway only has a fairly wide-meshed railway network that ends north of the Arctic Circle with the stations in Fauske and Bodø - further north is Narvik connected to the Swedish rail network. Many of the routes are spurs . In addition to the railways, many domestic Norwegian airlines from several companies, ship lines (including the Hurtigrute ) and bus routes, including many long-distance connections, local and long-distance public transport. In the north of the country (especially in the Fylke Finnmark ) this is partly a special bus type - the so-called Kombinationsbus - used, which has both a passenger compartment and a cargo area in the rear, as many remote villages solely on these buses The outside world are connected and therefore a large part of the freight can only reach the place by bus.

The PKP Intercity bus replaced the night train on the Warsaw - Białystok - Kaunas - Vilna route from 2004 to 2011 , but was then discontinued.

Polskibus offers a number of domestic and some international connections.

After the Carnation Revolution in 1974, the largest private bus companies were nationalized and combined to form the Rodoviária Nacional (RN). In the course of the privatization after joining the EU in 1986, the RN was broken up again and completely privatized from 1991. A large part of the privatized RN company parts were merged again by their new owners in 1995 to form the long-distance bus company Rede Expressos , whose network has since covered the entire mainland of Portugal. Rede Expressos is now the market leader in the domestic business and the most important competitor of the Comboios de Portugal (CP) state railway, which is also about to be privatized . The connections of the Rede Expressos have gained market share due to the increasing line closures and reductions in frequency of the CP.

In addition to Rede Expressos, a number of other bus companies in the country offer national and international long-distance bus connections, including the Joalto Group from Guarda , which was acquired by Transdev in 2010 . The community of bus cooperatives Internorte, Intercentro and Intersul, which is particularly active in international long-distance bus traffic, is of particular importance. Until 2017 she was also a shareholder in Deutsche Touring GmbH , which is best known for its European long-distance bus network, under the name Eurolines .

As in Germany until 2012, the railways were protected from competition from long-distance buses until 2018. Anyone who transports passengers in Germany on a scheduled basis requires an operating license . These are issued by the Federal Office of Transport if the existing public transport services are insufficient. Without such a license, passengers may only be transported in cross-border traffic: Flixbus, for example, sells tickets from Zurich or St. Gallen to Munich, but not between two Swiss stops. An operating license for cross-border traffic, on the other hand, is easier to obtain. Permitted stops for picking up and unloading passengers are in accordance with the directive on cross- border bus traffic between Switzerland and third countries : Basel, Bellinzona, Bern, Geneva, Lausanne, Lugano, Lucerne, Olten, Sargans, St. Gallen, Visp and Zurich. The transport company may serve a maximum of two further domestic stops on the same bus route, apart from the destination or departure point. These must be on the direct route between the border crossing and the destination or place of departure. Lugano - Lucerne - Basel - Germany would be allowed, but not Lugano - Lausanne - Basel - Germany.

In practice, the ban on not carrying passengers within Switzerland was undermined. For example, passengers bought a ticket from Zurich to Basel-Mulhouse Airport , but got off at the border in Basel. A penalty was imposed on Flixbus for this; the company commented on this by saying that they cannot prevent passengers from disembarking before their destination.

In 2018, the Federal Office of Transport (FOT) granted a concession for the first time for domestic long-distance bus routes that competed with the railways. From June 10, 2018, Eurobus swiss-express was offering domestic long-distance bus trips. With a transfer hub in Zurich , three lines were offered. The start was originally planned for the end of March 2018, but the company was waiting for the integration into the general subscription / half-fare system. In order to obtain an operating license, the FOT required that the company - like most other transport companies - accept these two subscriptions. The offer was discontinued in December 2019.

One of the largest and best-known intercity bus companies is Greyhound , which with over 2,700 destinations is the only provider with a nationwide network. There are also a few regional providers, of which the Peter Pan Bus Lines, founded in 1933 with a network aimed at the east coast states, is the largest.

The longest bus route in the world runs from Caracas in Venezuela over 9,660 km to Buenos Aires in Argentina , through Colombia , Ecuador , Peru , Bolivia and Chile . The operator is the company " Expreso Internacional Ormeño " from Lima (Peru).